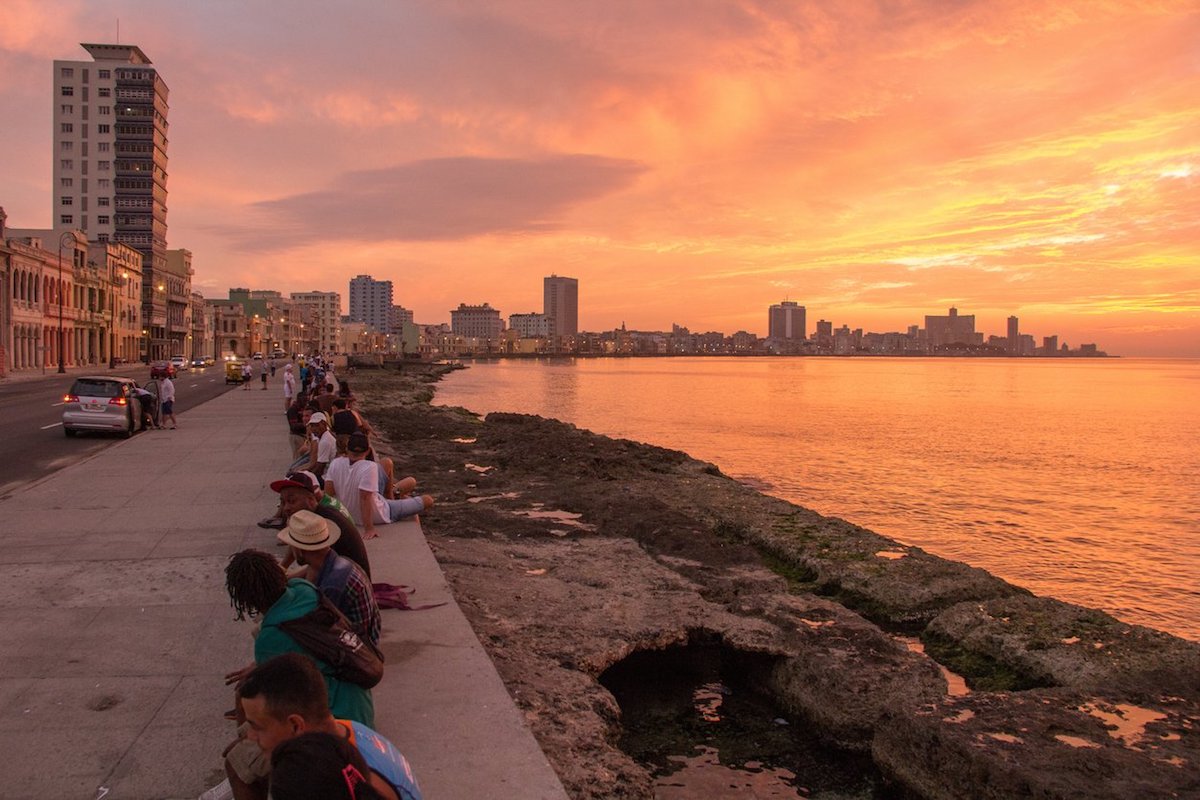 Walking in the streets of Havana, Cuba’s capital and primary tourist destination, is a remarkable experience. Havana is a show-stopper, a teleportation device into the 1950s and 1960s. Often, anything that is described as ‘stuck in the past’ is seen as ancient or forgotten, especially when we speak of a country or a city. Being associated with the past connotes underdevelopment and a lack of modernity but in some rare cases, being stuck in time can add a considerable degree of magnificence. 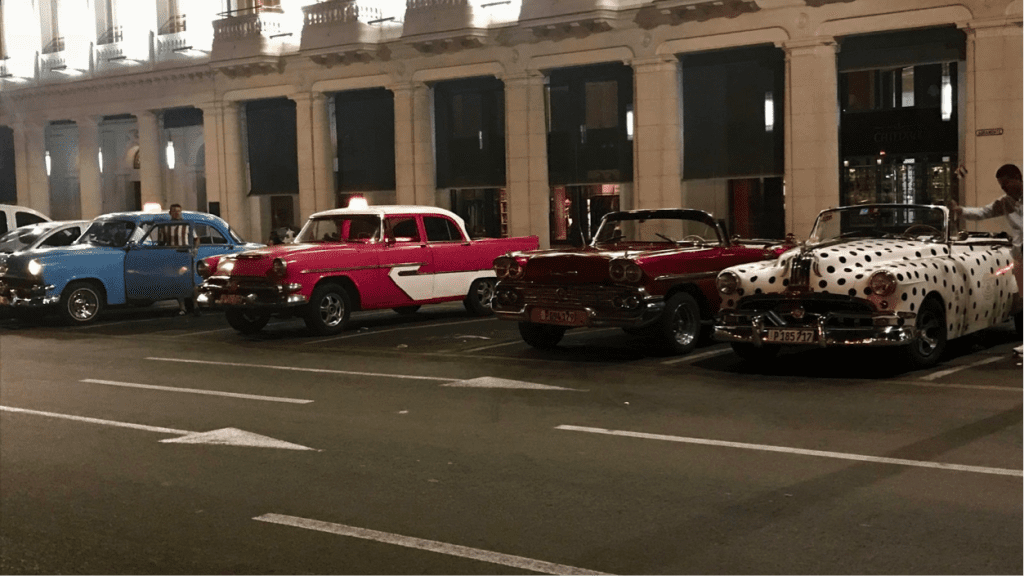 Instead of colorful shops inviting the enthusiastic tourist, you find cars. Havana is significantly lacking in shopping centers and stores. There are several shops that sell typical souvenirs, but no clothing stores. Where do the Cubans shop, I wonder? Apart from a few modern rentals, the cars you see on the streets of Havana, and all of Cuba, are the most colorful and well-conserved American cars. For as little as five dollars, you can take a ride in your choice of classics from Cadillacs, Fords, Buicks, Chevrolets, and Pontiacs. Along with these, you also see Soviet cars dating from the 70s and 80s, following Cuba’s newfound relations with the Soviet Union.

Cuba’s history has not been an easy one

First, there was the Spanish colonization. After the Spanish-American war, much of Cuba’s territory was signed over from Spanish hands into American ones. Under Batista’s dictatorship, Cuban and American relations seemed to flourish. However, not all Cubans were pleased with Batista’s decisions. Revolutionary movements slowly reshaped Cuba during the 1950s, finally erupting on January 1, 1959–– Fulgencio Batista had fled the country, ending his seven-year dictatorial rule over Cuba. Fidel Castro, Cuba’s leader following Batista’s exile, was backed by the U.S. at first. The relations between the two worsened over the next few years, until, in 1964, the U.S. banned all trade with Cuba. In response, Castro sought new trade relations with the Soviet Union. So how do all of these events, mere specks of dust in the long and eventful history of the Republic of Cuba, shape the country’s present reality?

A 21st century image of Cuba is not that difficult to summon because it has existed almost entirely unchanged for some sixty years now. You only have to perform a few Google searches before seeing different combinations of the following: ‘stuck,’ ‘frozen,’ or ‘trapped’ + ‘time,’ or ‘past.’

The cars stand as evidence to the country’s unchanging history. In a conversation with one of the taxi drivers ––with what little Spanish I know, and what little English he knows–– he told me that people have maintained the cars since before the trade ban with the U.S. Apart from updating the engines and other parts, owners have not updated their vehicles. These cars operate mostly as taxis, due to the reliance on tourism and the privatization of taxi driving since 2011, as opposed to keeping it under government control as most services remain in Cuba.

Another driver explained that a taxi driver earns more than a doctor in Cuba. The majority of people do not drive in Cuba, further amplifying its timeless suspension. The effect of this is a dazzling display of traffic-less roads and spectacular coastal highways. If I were to compare between the number of hours a person living in Lebanon spends on the road per week and the number of hours someone living in Cuba does–– well, to be quite frank, I would rather not know.

Cuba in the present day

Apart from the colorful parade of 50s cars, Cuba’s timelessness is conserved by a general lack of internet connection. In the 21st century, this might seem like ridiculous backwardness. However, experiencing the absence of constant WiFi availability can be an empowering experience. WiFi in Cuba is a government provided service available mostly in ‘WiFi Parks.’ One hour of internet costs one dollar. It might seem like a hassle, but finding these parks is easier than it seems. 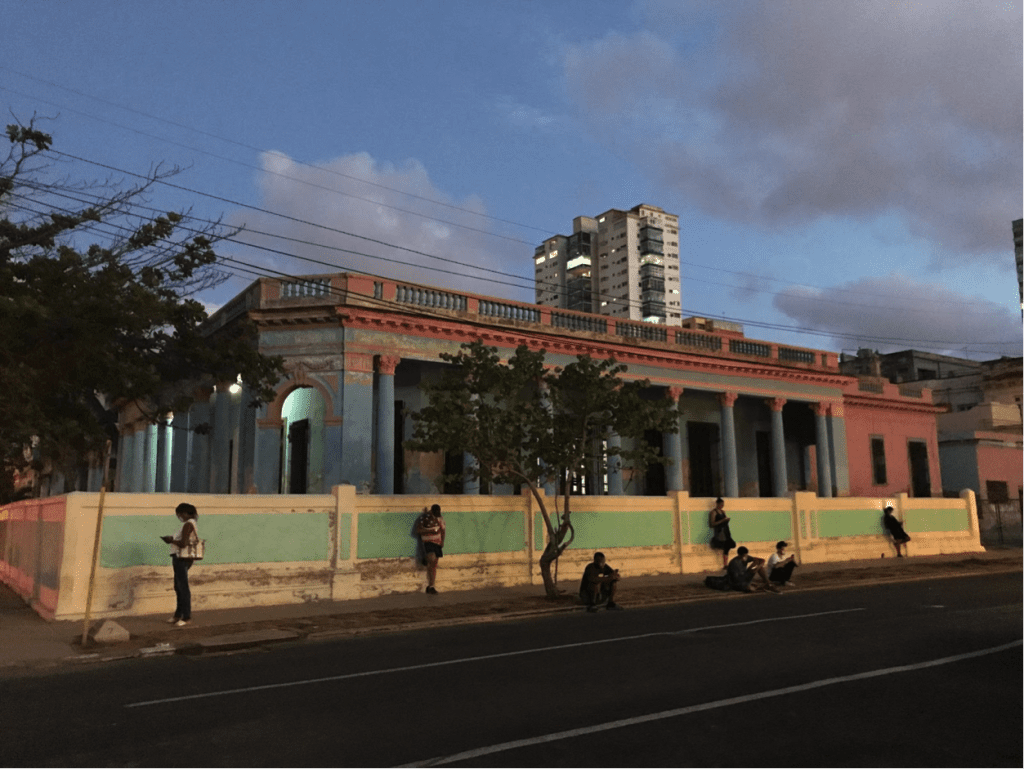 A quasi-human GPS system guides the confused tourist. Whenever you see people standing near each other with phones in hand, you can tell that it’s a WiFi park. So how does this limitation of internet access serve the Cuban public? Alternatively, how does it serve us, the people with constant internet access, glued to smartphones and laptops both in public or in private? Cuba’s unstable internet connection and sole access through these public parks makes privacy questionable. People of all ages gather in these parks, chatting loudly through their phones and screens with loved ones abroad. Sitting there, you can tell whose son has a newborn baby, and whose daughter just moved to a new apartment. You can also feel the frustration as the connection interrupts these chats. On the opposite side of the balance, we sit with friends in our cafes, bars and restaurants forcing a cloud of privacy on the publicness of these spaces.

Cuba’s lack of omnipresent internet simplifies life there in manner much needed by our modern-day lives. The spatial separation of when people can go online and when they can’t emphasizes a separation between public space and private space. By not conflating these two spaces, as most of us do on a daily basis, people in Cuba, ironically, are more in touch with their present. No one checks messages while driving, or slows down to 30km/h on the highway to Shazam a song. I’m not saying that we should do the same– restrict internet to certain areas in public. I am simply re-imagining a Lebanon in which people are more focused on the expressions of those they are interacting with rather than waiting on emoji’s and LOLs sent over WhatsApp. I am re-imagining a Lebanon whose corniche is as busy at night as La Habana’s Malecon (which stretches for 8km), where people spend hours every night, until four or five a.m., listening to Reggaeton and drinking Cuba Libres in the aftermath of breathtaking sunsets.

Beirut and Havana are both listed as two of the cities on the New 7 Wonders Cities page. What does that say about these two cities? Surely, it suggests that they both are cities of wonder; cities with rich histories worth admiring. The experiences of each city, however, could not be more different.