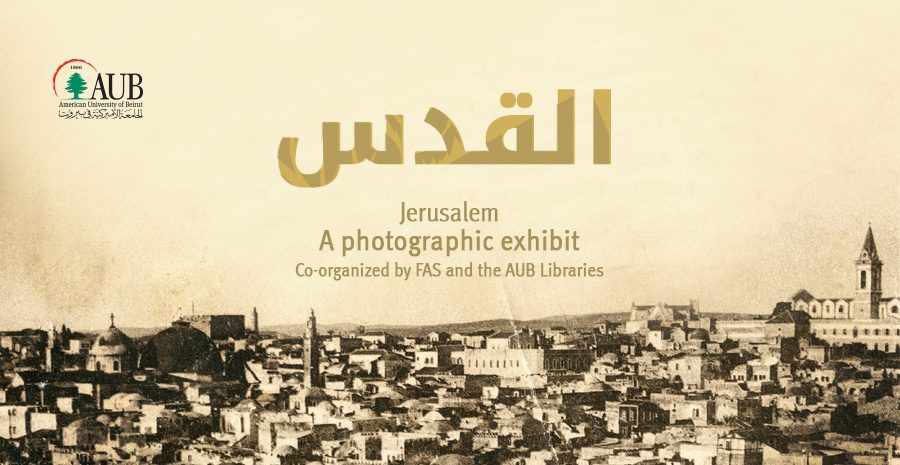 Jerusalem as seen in AUB’s archives

The means through which political stances are expressed today are limitless.

After US President Donald Trump’s recent announcement on Jerusalem, social media websites were flooded with rage and protests were held across many areas in the country.

Did Lebanese universities have anything to say about recent developments?

The Faculty of Arts and Sciences at the American University of Beirut, the University Libraries, and Archives and Special Collections department hosted an exhibition titled “Jerusalem: The Sound of Light in Stone,” to express solidarity with Palestine.

All of the artwork presented comes from one of AUB’s most valuable (and mystic) secret reserve: its colossal stacks of archives. Photographs, negatives, letters and books are all kept in a cool temperature beneath the university’s main library ‘Jafet’. 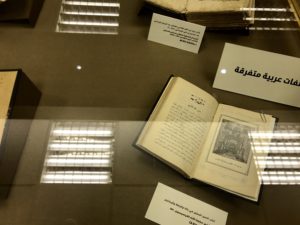 This particular exhibition, taking place in Jafet’s hall until the 22nd of December 2017, explores the “narratives of the first generation refugees [that] are instrumental to the survival of the cultural geography of spaces, traditions, and histories from pre-1948 Palestine,” as stated in the exhibition’s description.

The various photographs exposed, both in print and negatives, as well as the letters, manuscripts, and maps took the visitors on a dive to the heart of the historical city that is Jerusalem. The exhibition didn’t romanticize the history of the city, a pit it could have easily fallen into by showing old negatives and letters, but in fact presented the narrative of the story factually, leading to pre-1948 Jerusalem.

Soldiers in their uniforms with their thick moustaches, the interior of the church of the Holy Sepulchre, as well as street photographs, are amongst the many shots exposed. Some date back to the end of the 19th century such as the Blatchford photo collection which dates back to the 1880s. Those photographs were taken by prominent names back then, some of which are Sarrafian, Dupré, and Sebah.

One of the images portrays a narrow alleyway with citizens in their traditional outfits which consisted of ample skirts made of thick dark fabric. The architecture of the street, with its embossed rocks, is quite similar to that of Lebanese traditional houses and streets. The exhibition sounded well with visitors who can relate to the artworks presented, reminding them of Lebanon’s history and culture.

On another front, the official documents presented provide a more precise representation of the pre-1948 Palestine. Reports on importations and exportations, maps that are carefully drawn, as well as letters describing the differentiated states Jerusalem endured during the various historical events, were all on display for the visitors to get a better sense of the various dimensions that shaped Jerusalem as we all know it today. Needless to say, the considerable amount of architectural documentation of the religious sites is sufficient proof that Jerusalem indeed remains the cradle of the Abrahamic religions.

One of the most striking pieces presented in the exhibition is a small notebook. The pages depict pictures of Jerusalem facing dried-out flowers.

The flowers are “actual specimens, dried, pressed and separated by tissue paper,” as per the legend attached to the notebook.

The document dates back to the 1920s. Although photographs and words do reflect a reality, a past, and a history, the fragile and dry flowers presented in the book added a lively dimension to the exhibition. The past and the present became inseparable, for a couple of hours that is.

In holding this exhibition, AUB pays tribute to the grandiosity and rich history of Jerusalem. “This exhibit captures not only the cultural wealth of Jerusalem,” said Faculty of Arts and Science Dean Nadia El Cheikh in a press statement, “but also its significance to the collective memory of all Arabs and their intrinsic attachment to the city.”