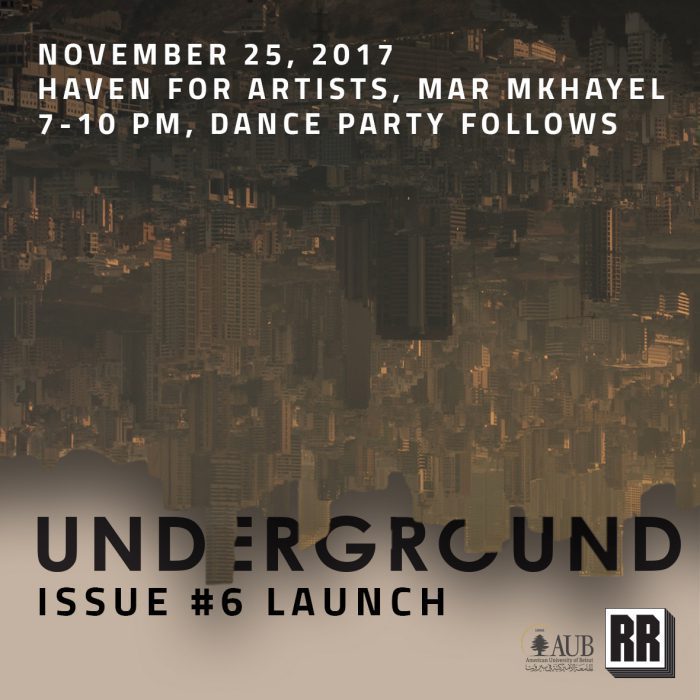 Rusted Radishes “is a literary and art journal housed in the American University of Beirut,” said Vicken Margossian, the Managing Editor. Created in 2011 by AUB faculty members Rima Rantisi and Crystal Hoffman, the magazine is now at its sixth issue.

Published once a year, Rusted Radishes comprises extracts from theater plays, fiction and nonfiction poems and prose, as well as mixed media, photographs, and illustrations.

The various pieces of work published in this issue, belonged to the umbrella theme of the underground. Absence, the hidden, and death were amongst the recurrent ideas that appeared in the magazine. During the launching night, some writers performed the pieces they published, offering a more personal interpretation of their work.

As an art magazine, Rusted Radishes does not hide behind taboos that are usually avoided. Queer love, suicide, and incest are amongst the various topics found in the magazine. “We do not limit art in any way,” said Margossian. “Contributors are allowed to send whatever they like and, as long as their pieces do not incite or promote hate-speech and discrimination of any kind, they will be [considered for publication].”

Another noticeable act, was Joe Poladian’s poem “Untilted”. Poladian did not content himself with reading and reciting his poem, as others did, but he performed each word, giving life to his verses and emotions to his text.

Musical duo Row&Joe, composed of Rawan Chaya and Joe Zakhia Al-Douaihy, opened the night, with their medleys. Although the guitar was a little low, Chaya’s powerful voice quickly compensated for it. The duo played a repertoire ranging from Amy Winehouse to Daft Punk.

For this year’s launch, Rusted Radishes chose Haven for Artists, “an art collective in Beirut that provides a platform to the underground art scene of the Middle East,” as they describe themselves. The magazine couldn’t have chosen a better place for their Underground issue. The old Lebanese house reconverted into an art space and transformed into a performance stage for the occasion, is located in the heart of Mar Mikhael, Beirut’s artistic hub.

Jai, one of Beirut’s hottest Indian restaurants, catered the event with spicy finger food. But Nanor Vosgerichian’s dark chocolate brownies were the highlight of the night.

In terms of art, food, and management, the Lebanese know how to host a proper event, but they should work on their audience skills. Talking about their weekend plans when artists are reading a play, is disrespectful to the performers, the organizers, and the work they have undoubtedly worked hard to achieve.

After a successful launch and issue, Rusted Radishes doesn’t plan on stopping here. “We would also love to use our slowly growing community of supporters to promote the writers, poets, and artists that make it all happen,” added Margossian.

In a country where the arts are often hushed down, Rusted Radishes’ presence is very much needed.