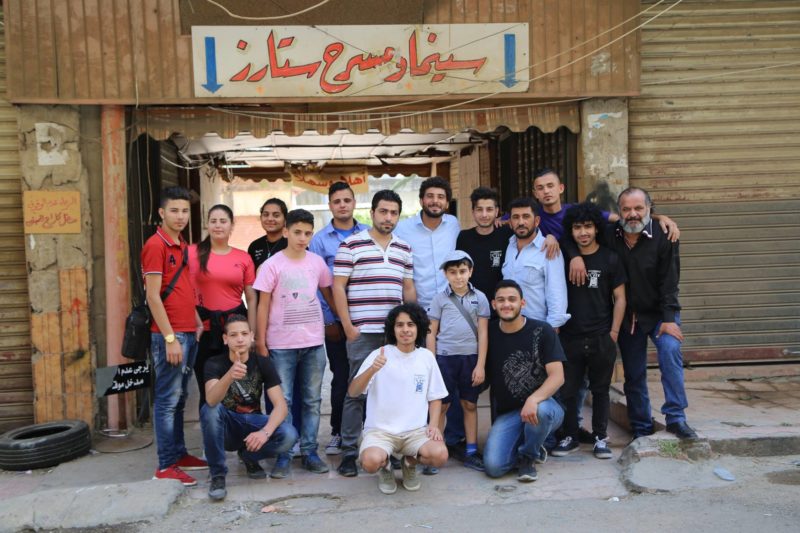 Beirut is often thought to be at the center of the country’s art and culture scene while other cities still struggle to garner a reputation for nurturing the arts. Beirut, with its expanding gentrification and increasingly packed neighborhoods, has taken on the mantle–as capital of Lebanon–to be the country’s hub in all sectors.

Yet, Nabatieh, a city in the heart of South Lebanon, is fighting against the centralization of art in the country.

Tiro Association for Arts (TAA), a youth-led initiative, aims to claim independent cultural arenas for the young in the Nabatieh area. TAA strives for cultural spaces that can encourage and promote freedom of expression, a matter which has long been absent in Nabatieh, let alone the entire South of Lebanon. TAA’s flagship project, situated on the corner of a rundown building, is Cinema Stars, an open space for young artists.

Cinema Stars acts as a space to bring youth from the city together for uninhibited cultural discussions around a movie or theatre play. Originally established in 1972, Cinema Stars was prematurely closed due to Lebanon’s Civil War. In 2016, TAA renovated and reopened the space and has since held many engaging activities for the residents of Nabatieh.

More recently, Cinema Stars was slapped with an order to close yet again. The theater was subsequently put up for sale, putting TAA’s project at risk.

The youth-led organization, in turn, launched the #SaveCinemaStars campaign.

The cinema cost was valued at $90,000. If one factors in service and maintenance costs, the association would need an approximate amount of $95,000 to ensure the rebirth of Cinema Stars. However, it is believed that $50,000 would also suffice as it would be joined with a loan amount of around $40,000. Every word being spread is going to help gain the campaign further visibility and thus increased donations. However, and since the Association has long believed in the importance of independence and freedom of expression, it had set an alternative plan in case not enough funds were raised and Cinema Stars was set for final closure. In case of funds shortage, Tiro Association for Arts will make sure to invest in renting alternative spaces in Nabatieh—the association already set potential spaces for that purpose; and building a mobile theatre that would help create temporary spaces for free culture in Nabatieh and the surrounding areas.

Tiro’s ultimate mission is help the youth freely express themselves, and this would ultimately remain their very own philosophy, with or without the existence of Cinema Stars. Youth in Lebanon need to be able to express themselves through Arts, Music, Education, and in every possible way handed to them. Cinema Stars is a stage for every one of them to tell a story, to tell their story. With the possible closure of Cinema Stars, the region and the country will lose yet another opportunity to reinvent its image as a country of successes, accomplishments, freedom, and beauty in every sense.

Tiro’s Association urges for help which can be channeled through making simple donations by contacting [email protected] Further support can be given by sharing the Facebook and Twitter pages promoting the organization and the campaign itself. Tiro’s Association would also accept messages of genuine support at the same email address mentioned as well.

By choosing to help save Cinema Stars, you would be supporting and sustaining the mere existence of freedom of expression—you will be further helping connect Lebanese, Syrian, and Palestinian nationals in a manner which will allow tolerance, creativity, and limitless expression.

To know more about the association, Cinema Stars, the campaign, and how you can help, visit the fundraising petition website here.