Beirut Today
Home Better Living Culture Taste of Cement: “We build, and then we destroy” 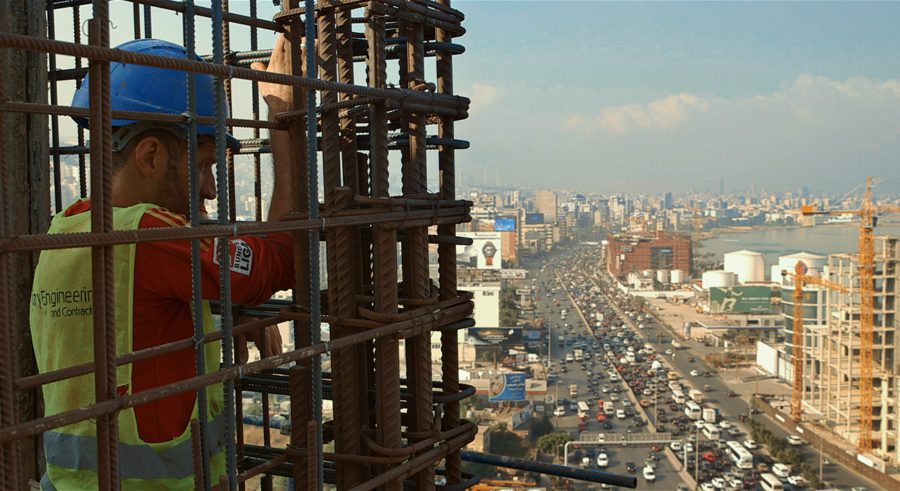 In a concrete room underground, the camera intricately zooms in and out of the faces of Syrian construction workers, capturing the tiny drips of sweat that stubbornly trickle down their faces. After a long day of working on tower blocks, the workers quietly retreat to their shabby mattresses and watch the news on their mobile phones or the television. In their eyes, there is a reflection of flickering screens documenting their country: houses collapsing over one another, small children crying from underneath the rubble, and bombs exploding in neighborhoods they are all too familiar with. The humidity of the rooms is almost tangible. So is their frustration.

Born in Homs, Syrian director Ziad Kalthoum uses his brilliant eye for detail to author his latest creation, “Taste of Cement”, to illustrate how many Syrians escaped a war only to become imprisoned in another country. Initially released in April of 2017, the movie was first screened at the Visions du Réel Film Festival and presented at the Open City Festival in London this month to a full house. Until now, it has received five awards.

Distinctively, the workers are not filmed speaking in the documentary but there is an overarching poetic narrative voice embodying the workers’ human experiences. Kalthoum tells Beirut Today that during his interactions with the workers, many of them preferred not to speak out. Since arriving to Lebanon, they have been gripped by the fear of deportation. “To this day,” Kalthoum says, “they are scared that Bashar el Assad is monitoring their every word, their every move.”

In one particular shot from above, we see helmeted workers mechanically making their way down to their subterranean rooms. Through these depictions, Kalthoum hopes to capture the realities of modern day slavery. The camera also pauses briefly to show a banner imposing curfew on Syrian workers after 7 pm. In the audience at the Open City Festival, a woman took the opportunity during the Q&A session to ask what the justification for a curfew was. Ansgar Frerich, one of the producers, stumbled to find the right answer. Kalthoum wasn’t there to give his own input. Almost ironically, both he and the director of photography Talal Khoury were denied entry because of the UK’s strict visa regulations.

For those aware of the treatment of Syrian refugees in Lebanon, the abysmal curfews are almost unsurprising. In an already strained country with derisive residency rules and a corrupt political system, Syrian refugees struggle to have access to their basic human rights. Today, there is an even stronger sense of fear and frustration among Syrians, given the recent Hezbollah orchestrated mass refugee repatriations.

Yet, despite the overtly political tone of the documentary, there is an unparalleled intimacy elucidating the painful memories that refugees bring with them to Lebanon. Through the narrator’s voice, we learn about his family, and his dreams of the woman with long hair – at times understood to be his mother, and at others his lover. In a room with over three hundred men, one worker sketches the woman the narrator speaks about. Kalthoum says that the artist refused to give him any details about the woman’s identity but, through this montage, Kalthoum wanted to shed light on the crippling lack of affection and intimacy in many of these men’s lives.

The viewer is transported from the soothing Mediterranean Sea and the mountainous Lebanese landscape to the uncomfortable close-ups of loud cranes, impossibly long ladders, and spraying equipment. The contrast becomes even more unsettling when it is drowned by the noise of an army tank lurching through the ruins of Aleppo. As the documentary prolongs, the sound of construction becomes synonymous with the sound of bombs and the leitmotif of the film becomes clearer: as Syrian construction workers continue to build in Lebanon, their country continues to fall to pieces.

The narrator in the documentary recalls his father – also a builder – telling him “When war begins, the builders have to leave to another country where the war just ended.” Kalthoum wanted to touch upon the two generations of Syrians that came to work in construction – those that arrived after 1990, and those that arrived after 2011. Despite the passage of time, both generations of workers are still reconstructing on the ruins of the Lebanese civil war. This reality – symbolized by the incessant sound of construction in Beirut – is what inspired Kalthoum to direct this documentary in the first place.

Although the Lebanese Civil War ended twenty-seven years ago, the reconstruction period is still incomplete – not only in terms of infrastructure, but also in relation to social, political, and economic affairs. Many historical buildings were destroyed after the war, to make room for new ones that catered to wealthy Lebanese, foreign investors and profit-maximizing businesses. In Beirut, the redevelopment and planning joint-stock company Solidere – founded by the late Prime Minister Rafic Hariri – became the symbol of this project. Welcomed by many in the beginning, the reconstruction project soon turned sour as it became obvious that its main priority was economic expansion rather than a mitigation of inequality, maintenance of religious and socioeconomic diversity, and preservation of the country’s rich historical past. Scholars pinpoint that the reconstruction of Beirut was part of the neoliberal move focused on attracting global capital rather than connecting to the needs of local communities. In light of the documentary, the question indirectly posed is: Who are these buildings even being built for? And what are the reconstruction lessons that post-war Syria could perhaps learn from the unfruitful Lebanese experience?

Exasperated, Kalthoum tells me, “we build and then we destroy. And then we build, and then we destroy again.” And this is the essence of this documentary: the unfathomable logic of destruction and construction, and how the two are intertwined in Lebanon, Syria, and beyond.