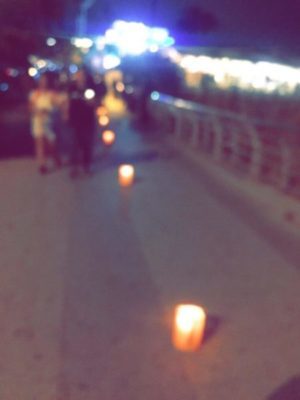 Beirut Walks Into The Dawn

Every three days, Lebanon loses an individual to suicide.

Every year, over 143 families in the country lose a member to suicide. The act of taking one self’s life is not eerie to the Lebanese scene. It happens all over the country and today more than ever. What happens in line with the act, in the majority of cases, is a society that invests its entire energy in putting the subject into locked closets—behind closed doors. It houses the thoughts that once controlled the person himself/herself leading them to suicide.

But, someone out of the crowd chose to speak up. The Embrace Fund came to life in 2013 through a partnership with the American University of Beirut’s Medical Center.

Every year, Embrace organizes a national memorial walk in attempt to appreciate those whom we’ve lost to suicide. The event has been successful in raising awareness on the suicide epidemic in the country. Vulnerable people, being those who genuinely want to be heard, felt that someone is devoting their time to listen wholly and carefully for the very first time.

The organization did this year’s walk titled “A Walk into the Dawn” last Sunday at 5 A.M. The walk kicked off at Beit Ward in Rawshe area to finally reach the Memorial Wall near the Rawshe Rocks. The Memorial Wall is designed and put up by Embrace for people to write messages to those they have lost to suicide or broad messages for awareness like “You are not alone” or “You are important” along many others.

With volunteers registering people attending the walk, and others putting up the wall and candles as well as setting up audio devices for the final destination’s announcements and recommendations, the event was bound to a definite success. 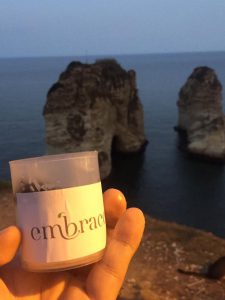 At the final destination, members of the Executive Team joined by patients and specialists gave out some words on the event and on mental illness stressing on the importance of awareness and tolerance.

During the walk, Embrace announced the launch of the first Suicide Prevention Helpline in the country, “The Embrace Lifeline”. It is expected to start running during the month of October. Volunteers who underwent intensive hours of training will be working alongside experts to lead on the project in terms of receiving calls and logistical matters as such.

“Someone at their most vulnerable state would be in their utmost need to be heard. This is why we’ve been extensively working on establishing the helpline – patients need it. Lebanon needs it.”

Embrace expects that the implementation of the helpline would and could help reduce suicide attempts by 20% in the coming five years. Embrace launched a micro-website on the day of the walk at www.embracelifeline.org where people get to record messages of support to the public as well as listen to other people’s messages. The idea behind the website as one of the event organizers, Hala Haouili, mentions is to let the vulnerable know they are not alone. Hala, and on the behalf of Embrace, wholly believes in how talking can save lives. Embrace piloted a social media campaign leading to the final launch of the helpline in October with hashtags and posts titled #Talking_Saves_Lives or #الحكي_بطوّل_العمر. 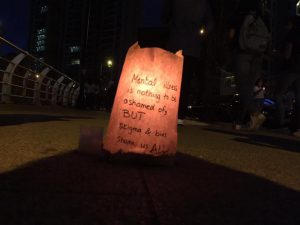 Embrace mentions that this year is a very special one because of the mere launching of the helpline. Haouili mentions that, last year, there was a promise of potentially launching a helpline and since then, non-stop work has led to the eventual launch of the line which brought a lot of hope to everyone who has been working on the project itself. The line has been receiving calls since last week due to social media visibility and volunteers’ help in spreading the message.

Embrace is trying to bring every patient’s concern into light as, today, the purpose is to abolish the stigma around mental illness and to let those in need of someone to talk to, know that everyone is all ears.

For more information on The Embrace Fund, its mission, and future activities—you may visit their website.

If you have a message you want to send to those who are suffering from mental illness or if you just want to hear what other people have to say about mental illness and awareness around it, you may also visit Embrace’s newly launched micro-site here.