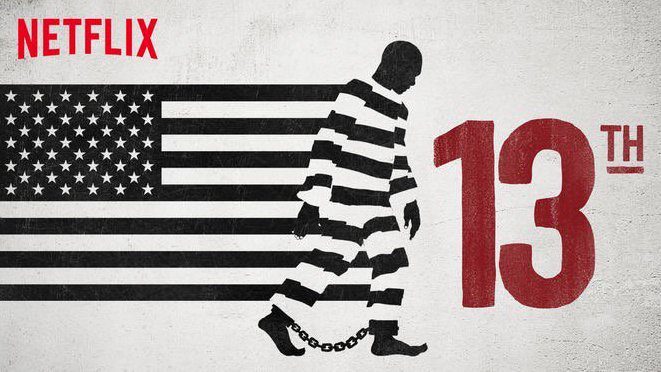 An essential and enlightening documentary to understand racism in the United States (spoiler alert!)

It is of common knowledge that Netflix, the magnum opus of our day and age, is coming up with “some great things”. Several viewers often spend weekends lying in bed or on the couch binge watching any new series that comes out or that has been gaining momentum, while simultaneously trying to ignore Netflix’s condescending: “Are you still watching?”

However, viewers should not be blamed, especially since Netflix has produced some original groundbreaking documentaries. This is particularly true with the 2016 release of the “13th Amendment”, a brilliant documentary about a shocking, yet completely factual historiographical account of racism and slavery in the United States of America.

The 13th Amendment to the US constitution is the amendment that effectively abolished slavery in 1865. It states the following: “Neither slavery nor involuntary servitude, except as a punishment for crime whereof the party shall have been duly convicted, shall exist within the United States, or any place subject to their jurisdiction”.

This means to say that though the amendment was seen as a huge milestone for slaves and a victory for northern states in the US, a loophole presented itself in the form of imprisonment. This gave birth to a new system of mass incarceration that only flourished with time, and is a practice that has been expanded and still persists today.

The above is the central theme of the documentary. Through an elaborate, well-structured storyline and informative interviews with legendary figures, such as renowned communist Angela Davis, “The 13th Amendment” does justice to the struggle of the disproportionately underprivileged and incarcerated black people in the US.

Not only does “The 13th Amendment” clarify numerous misconceptions regarding race, democracy, socioeconomics and mobility in the US but it also presents a historic outline that lead to the prison industrial complex. This includes the mass incarceration of millions of black people in the south shortly after the 13th Amendment was enforced in 1865, for petty crimes, such as vagrancy, and the criminalization of black people through their portrayal as “rapists” and “beasts” in popular culture since the late 1800s onward.The depiction of the black people sparked anger and hate in white people in the south, which ensued excess violence against black people and the creation and enforcement of the infamous “Jim Crow Laws” of in 1877, where black people lost their right to vote.

It also features an in-depth assessment of the way in which political figures played a significant role in the formation of a system that deliberately imprisoned black people. This caused an extreme surge in the number of individuals in prison.

After the civil rights movement in the 1960s, President Nixon’s “Law and Order” campaign and the increasing association of black people with drugs in the public media was only the beginning modern mass incarceration. With President Regan’s “War on Drugs” in 1982, the number of people – especially people of color -continued to increase, which also resulted in an increase in spending “for prison and jail facilities”, and very harsh sentencing that tore families a part and lead to a deterioration of the black communities. This produced new generations of prisoners.

The intensity and destructiveness of these campaigns can only be highlighted through numbers and statistics, where the rise in the number of people in prison rose from 357,292 in 1970 to 1,179,200 in 1990, that is nearly 4 times the number of prisoners in only 15 years.

Bill Clinton’s policies and presidential acts also did their fair share of damage to communities of color and further contributed to the “exploding” of prison population that is “overwhelming bias towards people of color” and spawned “the massive expansion of the prison system”.

The racialization of black individuals and legalization of violence and discrimination towards them has endured and they are continuously controlled by “systems of racial and social control”. The epitome of this institutionalized control is the fact that when someone is convicted of a crime, they lose their right to vote and are often shunned from society as their status as a “convict” does not allow them to reintegrate into society.

A retrospective and momentous point that is made in the documentary is that the staggering number of black people that have been incarcerated, their loss of the right to vote and their institutionalized discrimination echoes much of the same rhetoric as and seems to be inherited from the slavery and even of the Jim Crow laws. Also, with the privatization of the prison system and its further expansion, there is no interest in lowering the number of convicts in US prisons. Ironically, the “land of the free” that makes up 5% of the world’s population is home to about 25% of the world’s prisoners.

Finally, the documentary concludes with the point that 1 in 3 black men will be in prison once their life, and that though black men only make up 6.5% of the male population in the US, make up 40.2% of the prison population.

Though it can be quite graphic at times, “13th Amendment” is a very insightful and essential documentary that should be viewed by any individual that truly wants to understand the exasperation and frustration of black communities in the US. It hands its viewers a factual and emotionally packed journey to consciously recognize the black experience in the United States.