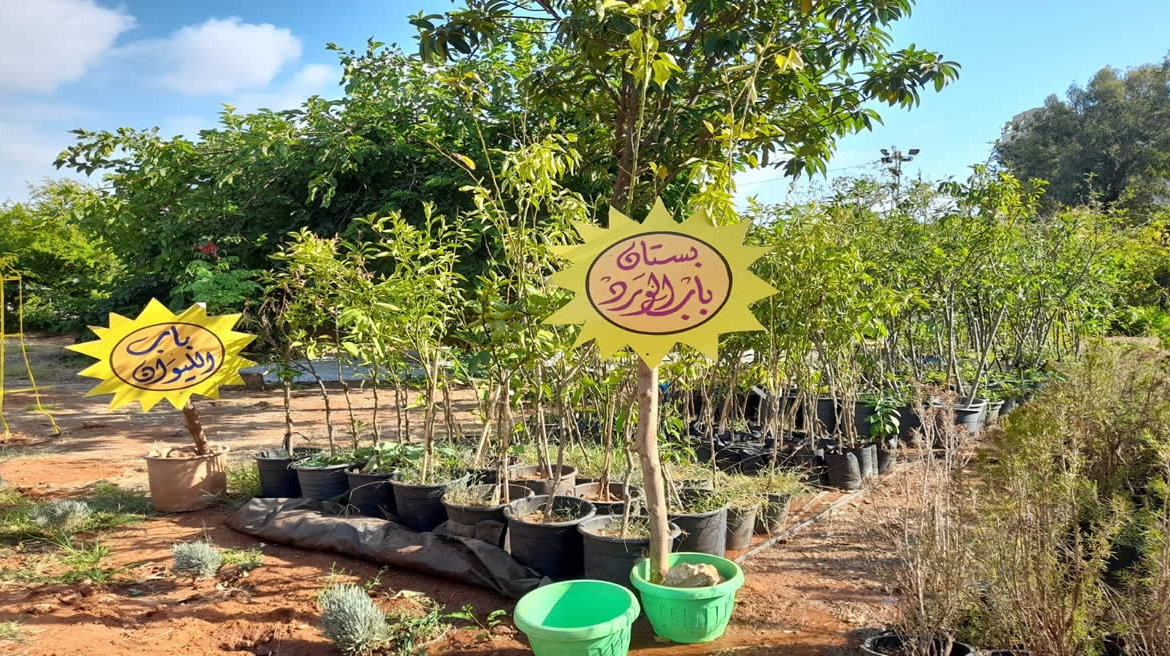 A cemetery for what used to be green and growing.

Yet, among the dead survived a single tree: a purple bauhinia.

Sparks of pink against an ashen background. Sparks of hope for an otherwise hopeless place.

This is what Ms. Iffat Edriss, president of Cedars for Care, encountered in her first visit to the plant nursery of the Beirut National Forest. The organization, collaborating with the Lebanese American University since January 2022, is restoring the forgotten forest and its nursery for both environmental and social causes – to create a sustainable public green space safe and welcoming to people of any and every identity.

Founded in 1998, Cedars for Care (CFC) is a non-governmental non-profit organization striving for the environmental and economic well-being of Lebanese citizens. Its numerous projects, often in association with other NGOs, have ranged from making and distributing food to the needy during the Islamic fasting month of Ramadan to cleaning up coastal shores.

In its 2050 vision for Lebanon, CFC seeks to establish Beirut as a botanical garden; an area where nature and civilization, greenery and technology, can co-exist. The national forest, according to Edriss, presents itself as an ideal starting point. It is a green space which, if preserved, can help sustain similar areas in the city and achieve a balance between green and concrete.

Like many other citizens, Edriss claims not to have known of the existence of the forest, commonly referred to as Horsh Beirut, before discovering it with her fellow NGO members in 2021.

“The lack of awareness about this place, especially in the newer generation, is concerning,” says Edriss. “I think the war is why many of us don’t know it’s there.”

Prior to the 1975 Civil War, the area stood as an open park at the heart of the capital. According to Edriss, there had been gardens whose plants represented the countries of foreign embassies – a place of botanical diversity. During the war, however, the forest was used as a strategic point of attack and a source for supplies, through the cutting and burning of trees, and sometimes as a place to bury the victims.

When the war ended, and as an attempt to preserve what remained of it, the Beirut municipality closed the forest to the general public for a duration of 25 years. The lack of accessibility, paired with the neglect it suffered even after it was reopened in 2015, made the location elusive and forgettable.

“Today, the economic crisis has caused the collapse of the municipality, and further down with it went the forest,” said Edriss. “We are suffocating here. The forest can freshen the air, restore a normal water cycle, lessen disease cases, and bring people together. Saving this place means saving the city and its people.”

In August 2021, CFC was entrusted by the Beirut municipality with the management of the forest and its nursery for three years.

“We have been working for almost a year and the nursery has seen good progress,” says Edriss.

The nursery, called Bab El Ward, acts as the infrastructure and tree supply base that sustains the forest and other green locations in the city. Under CFC’s supervision, it has been divided into neighborhoods preserving a variety of species.

An important addition to the nursery CFC is working on, states Edriss, is the school they plan to use to teach the youth about the ecosystem and the city’s several neglected green areas.

“Our youth is the key,” says Edriss. “This city is theirs, and its future is theirs, which is why our targets, at the moment, are schools and universities. We need their involvement.”

LAU at work: more than an environmental mission

The Lebanese American University stands as one of the institutions offering its services. Having made it part of the Tomorrow’s Leaders MEPI scholarship, students and staff members alike have been, since January, volunteering at the nursery. Cutting weed, planting trees, and cleaning the area are some of the activities they engage in.

“Our university stresses the importance of contributing and making a change,” said Dr. Raed Mohsen, dean of students at LAU, “and when they do this type of work, they will look back to it and say, ‘this is what I’m giving back to society, my activism.’”

Ms. Tania BouArbid, assistant program coordinator for LAU’s MEPI-TLS, states anyone, not only MEPI scholars, is welcome and encouraged to volunteer.

Emphasizing the dual purpose of this project, she says, “By reviving the forest, we are not only saving the environment and letting people know this place exists. We are also creating a safe space for everyone. I want people to know that I, as a female, can feel safe going there.”

As a gender expert and director of the Title IX office at LAU, Dr. Jennifer Skulte-Ouaiss has been looking for projects that would break out from focusing solely on empowering women and equality, to looking more broadly at how gender can be found in every aspect of civic life.

“In Lebanon, there isn’t a lot of public space. There’s even less public green space,” she said. “And public space is often assumed to be a ‘male space.’ For women, it’s better if you’re somewhere private; it’s safer, you shouldn’t be out by yourself.”

She mentioned how renovating Horsh Beirut can support gender equality, even when people often do not see the link between nature and gender. Developing the park, she claimed, provides people of every identity the right to enjoy safe and green public space on an equal basis: men, women, the disabled, the migrants, and the natives – anyone and everyone.

“But we need people to know this place exists and to participate,” said Dr. Skulte-Ouaiss. “To spread knowledge is our priority.”

Reem, a MEPI-TLS scholar actively volunteering with CFC and who asked to be identified by her first name only, believes raising awareness is easier in theory than practice.

“But I think, definitely, that having project campaigns in university campuses is a good way to start,” she said. “There also needs to be a social media presence, because we, the youth, are mostly online today.”

Cedars for Care, in its plans for a better Beirut, sees in the youth the same hope it saw in the purple bauhinia that first day.