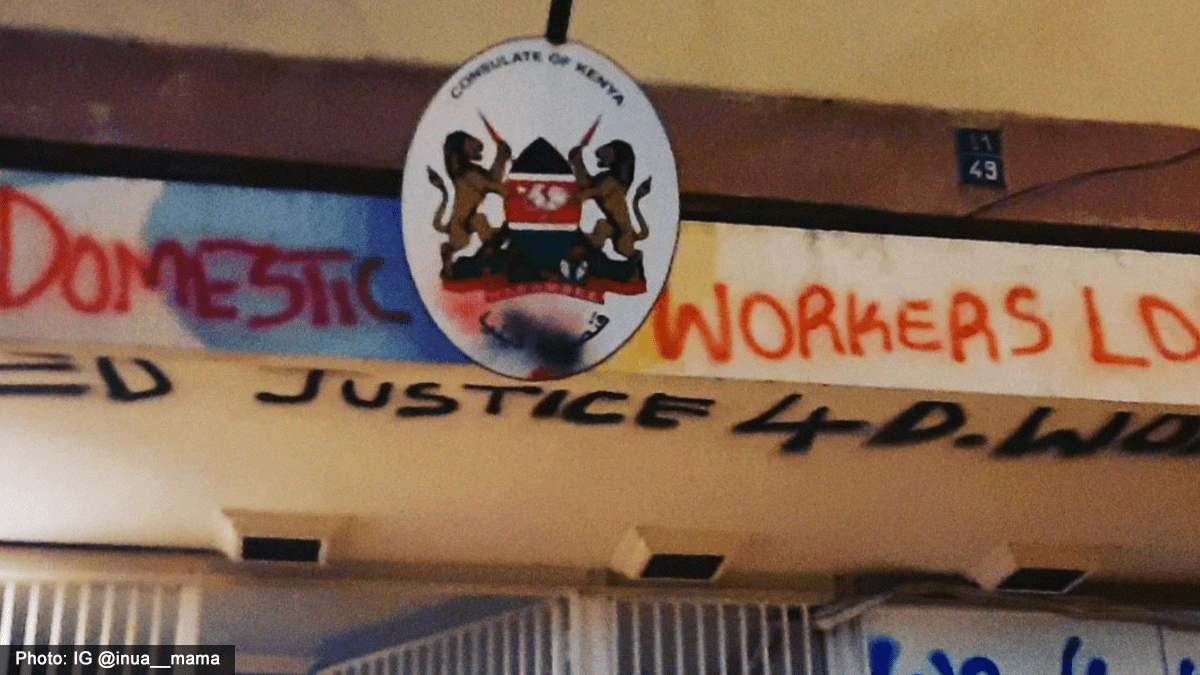 After more than four months of arrest, the fate of Kenyan worker and activist NM remains unknown. She remains with General Security despite being arrested on false accusations of which she has been acquitted.

“The Lebanese authorities are breaking all International and National laws by bypassing the UNHCR’s legal mandate to forcibly deport a registered asylum seeker,” wrote ARM on social media.

NM is a Kenyan domestic worker and asylum seeker currently detained in Lebanon and at risk of imminent deportation to her country of origin.

She was arrested by the General Security Directorate on April 4, 2022, and was before that an advocate of labor rights for migrant domestic workers in Lebanon.

In early 2022, she played a vital role in the protests in front of the Kenyan honorary consulate in Beirut—against which several violations and cases of abuse of power were reported.

It was also reported that the honorary consul and Vice Consul Kassem Jaber had created a climate of fear and mistrust.

Such violations include extortion and exploitation of undocumented women seeking to return to Kenya, with many women alleging that additional fees were being paid for essential consular services and that they were encouraged to pursue sex work to cover these expenses.

Lebanon’s abusive Kafala (sponorship) system governs the work of migrant domestic workers in Lebanon and has been described as a form of modern-day slavery, enabling emloyers to have complete control over their employees and denying the latter protection by law against abuse.

In early August 2022, General Security attempted to return NM to her country of origin. Although she had requested asylum in Lebanon, she was not deported due to significant pressure from civil society—but she remains at risk of forced return.

“UNHCR cannot share information about individual cases, given the confidentiality of data related to the individual and the necessity to protect them,” UNHCR spokeswoman Dalal Harb told Beirut Today. “But asylum seeking is a fundamental human right stipulated in Article 14 of the Universal Declaration of Human Rights of 1948.”

Harb mentioned that the UNHCR works closely with states, including Lebanon, to ensure that this universal right is respected.

While UNHCR did not deny nor confirm whether NM applied for asylum, the MENA Rights Group mentioned in a statement that the Kenyan national defended the rights of migrant workers in Lebanon before her arrest and played a leading role in the demonstrations in front of her consulate when Kenyan workers were demanding support for their repatriation.

Saadeddine Shatila, a researcher at MENA Rights Group, told Beirut Today that Lebanon would be violating international human rights conventions if it deports the Kenyan activist.

“The Kenyan activist has requested international protection from the UNHCR,” he said, adding that deporting NM would put her at grave risk in her home country.

Shatila recalled a similar case in 2016.

“Lebanon had previously deported the Nepalese activist Sujana Rana to her country because of her activism in Lebanon.”

NM stated that she was subjected to torture and physical violence while in detention. The violence she faced resulted in her getting dizzy, losing consciousness multiple times, and breaking her leg.

Despite that, she was denied access to medical care and medication.

Amnesty International called on the Lebanese General Security to investigate the torture NM was subjected to in detention, as her complaint has not yet been referred to any judge yet.

Similarly, the opportunity for her lawyer to correct and complete her legal papers has not yet been provided.