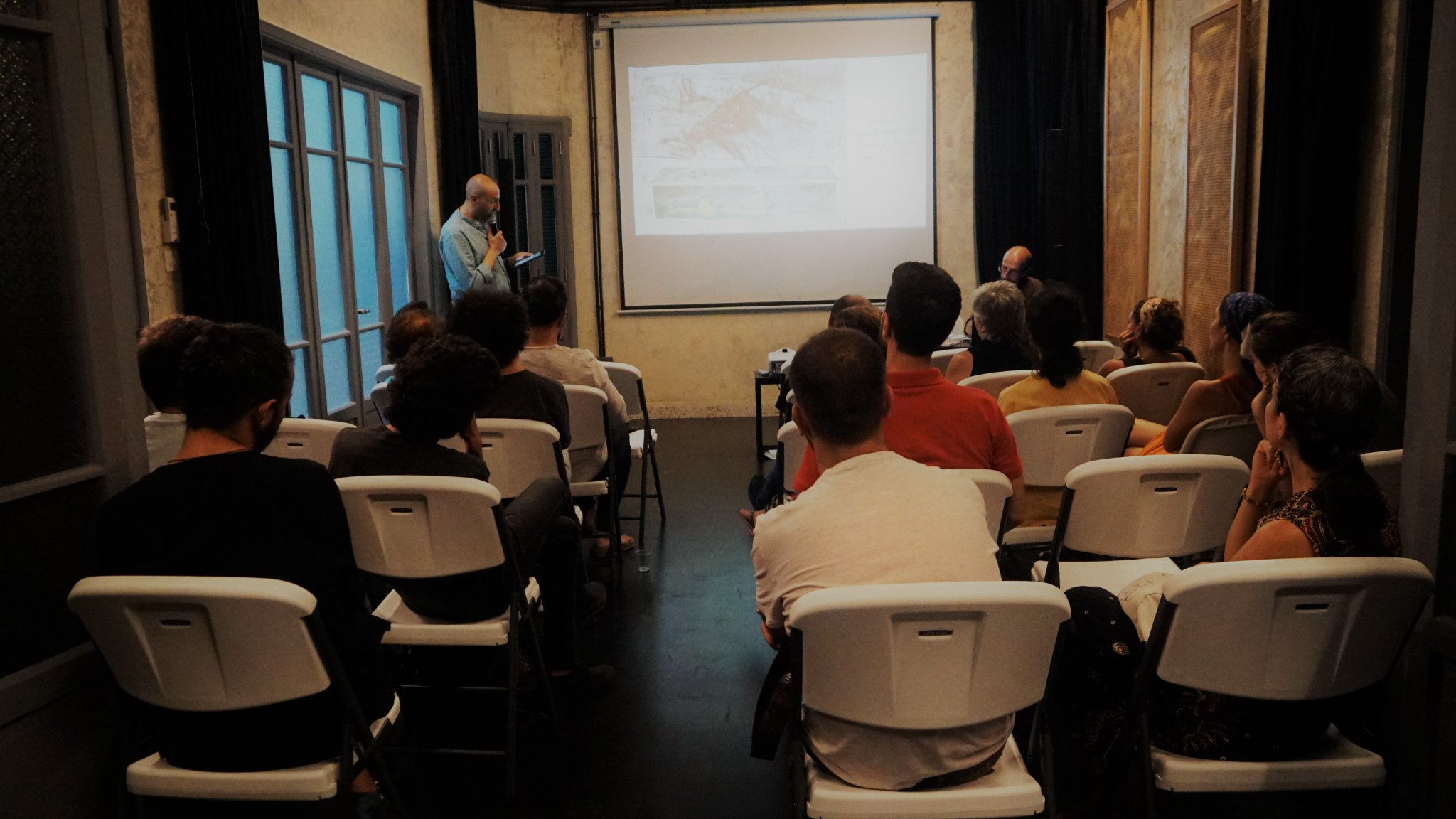 During the past two weeks, the Ettijahat Foundation for Independent Culture held two discussions on the book Destructiveness as Visual Art: Philosophical Analysis of Contemporary Syrian Art by Guillaume de Vaulx and Nibras Chehayed.

In the first session, Al-Rashidi and Chehayed dealt with the subject of “Destructiveness” through the question: “What can art offer in a destroyed country?” They believed that rather than the answer being “nothing at all”, it was “almost nothing.”

Through the discussion of 11 works of art mentioned in the book, it was clear that Syrian artists, both females and males, had created unique aesthetics for their destroyed and broken world. These artists also presented in their artworks principles of unexpected attitudes towards the destructive principle, and towards those who befall this destruction is in their existence, their bodies and their remains.

During the second session, Chehayed and Al-Rashidi discussed what was stated in the last two books. The moderators urged the audience to think about the body within the current Syrian context.

The first approach examines the human body in both film and visual art, such as how the body of the photographer and the subject – or the witness – became the main pathway for proving and narrating the “truth” amid the barrage of interpretations, and the various manifestations of the body in visual art.

The second approach examines the body through speech in writing from novels to poetry, to theater, oral and written testimonies in Syria.

The two books seek, through these various approaches, to rethink the relationship of image and language to flesh and blood.

Explaining the reason behind organizing these sessions at the present time, Elkafri told Beirut Today that, “the importance of the three books, and Chehayed’s work in general, is rooted in the rarity of the research that attempts to analyze the arts from philosophical and conceptual approaches.”

Elkafri did not deny that similar research internationally had taken place, but believed that “the Syrian situation did not allow for studies that have the ability to analyze the new Syrian arts to be provided due to the complexity and density of the topic. Thus, this explains the reason behind the importance of Chehayed’s work which allowed for a space to study and analyze the different artworks present in collaboration with other researchers.”

Elkafri believes that Chehayed “tried to link (in the three books) its relationship with the history of the arts on the one hand, and philosophical history on the other. The important idea that he presented was that he did not try to prove that these arts might apply to these philosophical or epistemological theories at all, but furthered his work to prove that these arts borrow philosophical concepts from the world and presents them with displacement as a result of the amount of changes that are taking place. Therefore, these arts come with something new that did not exist in our lives before.”

Showing the importance of organizing such discussions, Alkafri pointed out that “they stem from the context of Beirut embracing Syrian art for several years, many of these works in these three books being produced in Beirut, and the art questioning Beirut as a city.”

“From here stems the importance of saying that engaging with the public space, asking questions about art and its relationship to changes, and providing spaces and platforms after all these disasters that occur is the context that we are trying to preserve, because the value of books is not only in their request, but also in their discussion and disagreement with them, and your understanding of them and change your opinion about it,” he added.

In Chehayed’s talk about the body in Syrian art, one of the most problematic works of art that stirred discussion about seven years ago was noticeably absent.

The work was part of the exhibition “Naked” by artist Youssef Abdul Laki. Abdul Laki was present in the books exhibiting other art pieces, which drove questions as to why this work was absent.

Chehayed explains that Abdul Laki “is strongly present in the book of destructiveness” in the chapter devoted to him on the idea of ​​ “the tied fish.” He adds, “from analyzing this painting, the book became an extremely tragic concept and is compared to another concept known as the eccentric martyr.”

Chehayed adds that “on the one hand, in this analysis, a reference is made to the painting of the bird and the knife, and on the other hand, to the subject of martyrs and the paintings of the martyr.”

Chehayed explains that the reason behind not including the project “Naked” in the book was the lack of its connection with “first, the subject of destruction, and second the books not being a study of the works of Abdul Laki.” He further explains that “the book’s logic was to select 11 works, analyze them from a philosophical perspective, and to approach the aesthetic deviations that they tried to formulate. As a result, it eventually attempts to formulate conceptual deviations to identify 11 works that speak to the Syrian reality today.”

He continues by saying that Abdul Baki is present elsewehre, “first, through the cover of his painting without explaining or talking about anything, but it was explained a little in the book ‘Destructiveness in form’. Second, he appears in the article of the late Hassan Abbas (1955-2021), as he mentions a little about Youssef’s work on the epic body and the dead body, and talks about the martyr’s project in this context. And finally he appears in Alaa Al-Rashidi’s article, which also mentions the martyr’s project where he divides them into three ways he handled the martyr’s body, and Youssef is one of them.”

In the second session, Chehayed invited the audience to view their bodies in front of the mirror.

“What I tried to present within the statement, in terms of expanding the concept of the mirror in the sense that it is not only a reflective surface, is that, in other words, it is not silver-plated. However, it is related to what brings me back the reflections of my body. As a result, it is also a linguistic, intellectual, olfactory, gustatory, tactile and auditory mirror.”

He continues,  “what I am trying to say is that our images are as much as we tried to protect them from what I describe as ‘the outside’ to preserve the image of my body from deformation, this ‘outside’ invaded everything. The way I view my body today in the mirror, in its broadest sense, is affected by the invasion of distorted images.”

“A reading method through reading the two books as if the readers are looking at the mirror, watching their bodies through all these words and images that the two books deal with about the body, and how they see their bodies within these broken mirrors.Books primarily invite female and male readers to an intimate relationship with themselves, and therefore an intimate confrontation with themselves as well,” he concludes.

Themes of environment and climate change are urgent in Arab art

During the second session, Al-Rashidi touched on the types of the body present in Syrian art, including the agitated, imprisoned and oppressed body. Among these topics are the body and the environment.

He pointed out in his statement the rarity of Arab art dealing with the body in the environment. To explain this Al-Rashidi says, “the Syrian artist or art is not neglectful of the environment, but Arab art in general is.”

In his speech, he also refers back to the interview he did a while ago with the director of the Arab Fund for Arts and Culture (AFAC), Rima Mesmar, who pointed out that “environmental topics are now beginning to appear in Arab artistic production very timidly.”

Al-Rashidi attributed the reason for this to the fact that “the issues of environment and climate change mean more to industrial societies than developing ones. For example, while not limited to them, countries such as Lebanon or Syria do not produce environmental pollution like one of the cities in France. Therefore, environmental issues are very related to the industrial and technological progress of society as well as the amount of waste it emits.”

He adds that “the Arab is more focused on issues, such as politics and social problems. In turn, this causes the environmental problems to not be a current crisis for the Arab artists, even though our regions are currently most affected by them.”

“As the suffering began from the environmental crisis, it became clear that the Arab countries merely contributed to it, unlike industrialized countries such as China, the United States, France and Britain which were major instigators. In fact, one of the studies on the environment that I participated in France, showed that one citizen consumes approximately 70 percent of the environment compared to a citizen in developing countries. This topic began to appear gradually and take on its importance after the droughts that took place in Iraq, Syria and Lebanon, including forest fires, and I expect its importance to increase more after a while,” he said.

In his interview with Beirut Today, Al-Rashidi mentions the research he carried out in the book, noting that he found “a photographic work by the artist Alaa Al-Hassan titled ‘The Cartoon Castle’, where he talks about the drought that the Deir ez-Zor region was suffering from in Syria in the nineties of the last century.” He also refers to the sample he presented on “Abandonment” by artist Mohamed  .