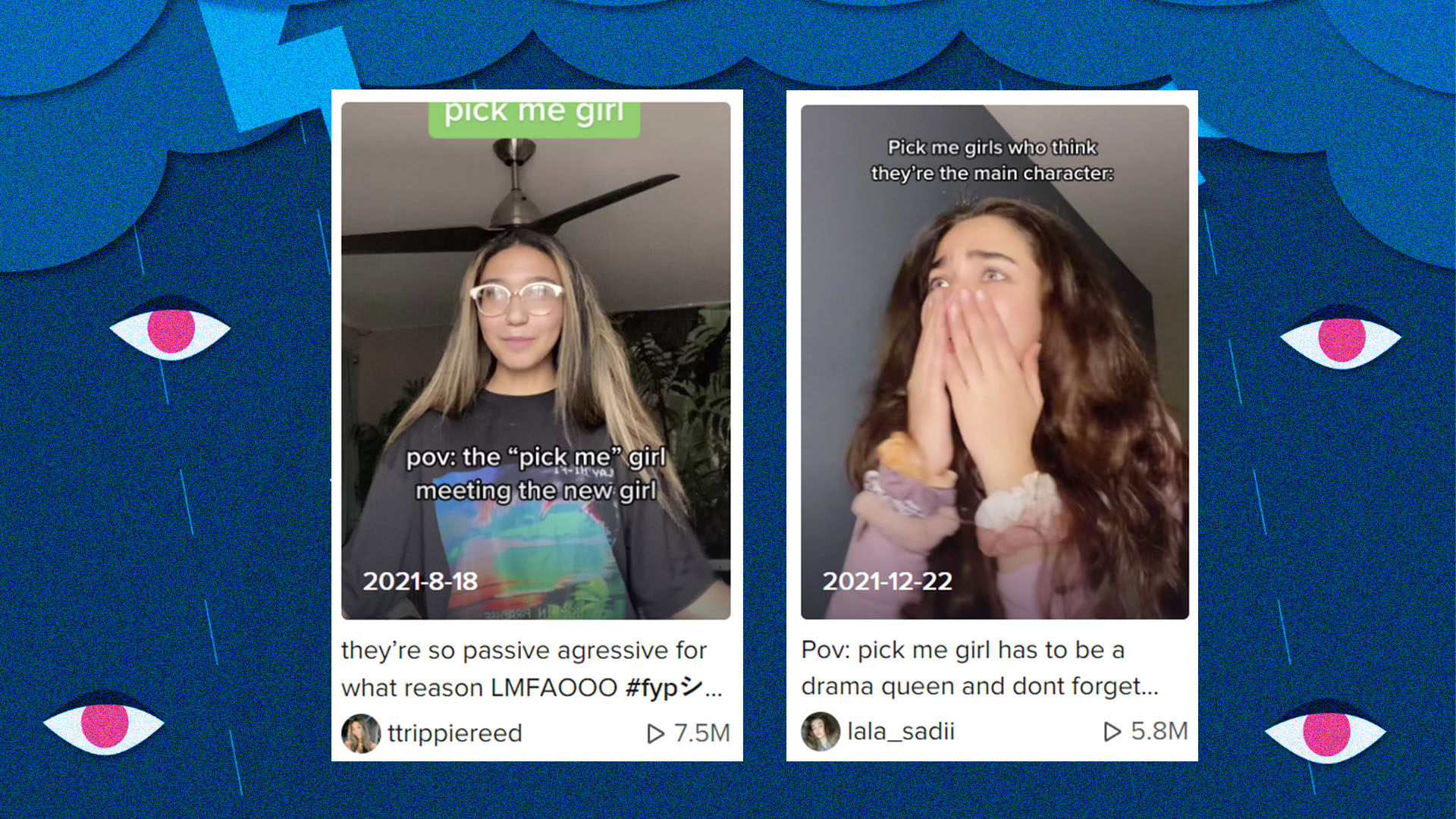 With more than 1.2 billion views on videos tagged #PickMeGirl, there’s a great chance you’ll come across this trend on TikTok. When it first emerged, I remember laughing at the memes and sketches because I believed it was calling out internalized misogyny and anti-feminists.

The first thought I had was that the rise of the “pick me” term had a good cause, one that evolved into another way of bullying and stereotyping women. But today I recognize that the entire concept is rooted in misogyny.

This recognition took time, and came as the trend shifted towards ever-more ridiculous points of contention.

When it first started, some videos were calling out girls who put down their best friends in front of guys for male validation—something relatable that many of us, including myself, have had the displeasure of experiencing.

As it gained more traction, I saw other versions with the caption “when she says she doesn’t like partying” followed by another with “when girls talk about playing football.”

Later, it became “the one girl that does not wear makeup” or “girls with names that start with ‘c’ and end with ‘b’.”

At that moment, it became utterly clear to me that describing other women as “pick me girls” is very misogynistic.

What does “pick me” mean?

The “pick me girl” trope has long existed. It’s the modern internet equivalent to “I’m not like other girls” or “Women are so much drama,” used against women who intentionally or unintentionally support patriarchal and misogynistic contexts for male validation.

Oftentimes, these are women who look down on traditional notions of femininity and shun other women for following them.

Girls who invalidate lifestyles associated with traditional notions of femininity ignore the difficult socioeconomic contexts that govern women’s lives, and turn a blind eye to facts such as the wage-gap, labeling feminism as man-hating, stressing that women are emotional, and putting other women down for things associated with basic “femininity.”

But those who today flood women’s videos with the derogatory “pick me” phrase are doing the same thing. They’re pitting themselves against other women for their lifestyles and invalidating their genuine hobbies, from gaming to sports.

Why is it misogynistic?

While the term was supposed to call out internalized misogynistic behavior, its use on social media platforms has become more problematic than helpful. It is now a tool used to call out behaviors that are not related to its initial purpose.

It shames women for having certain interests that do not go with the flow, assuming that their interests only revolve around seeking male validation.

This toxic label is used against women by “feminists,” becoming an excuse to drag other women down for any attitude that has the potential to arouse male interest, regardless of whether this behavior is harmless and self-serving or not. Now whichever way girls turn, they are susceptible to being named and shamed.

The assumption that women’s actions and words are only used to attract men is by itself a misogynistic thought—and this is exactly where the problem in the “Pick Me Girl” trend lies.

Tearing women down is the opposite of what feminism promotes, and targeting internalized misogyny in such a context is the only solution: Women need to help each other by pulling themselves and others out of these ideologies rather than falling back into the tricks and traps of patriarchy set out to create a wall between women.