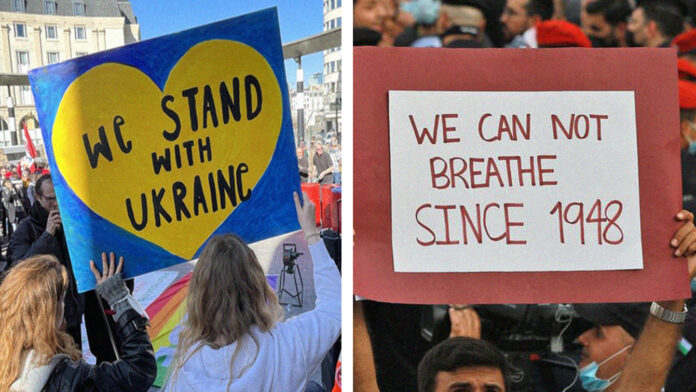 Parallels have been recently drawn between the Russian invasion of Ukraine and the Israeli-Palestinian wars. The point being made is that the former has been met with unrelenting support to Ukrainians, while the latter is usually met with controversy and often antagonistic views. The West has stood up fiercely in opposition to the Russian invasion of Ukraine, whereas caution has to be exercised in the Palestinian case—despite being one of the world’s longest running conflicts.

Except for some shy statements and non-binding resolutions, the deafening silence of the world in the Israeli-Palestinian conflict is startling compared to the unflinching support of Ukrainians. Putin claims that Ukraine was carved out of Russia, denying the country’s statehood in a way that is similar to Israel’s systemic aggression on Palestinian historical land, notwithstanding the disparities in historical claims.

We are witnessing a media frenzy over the Russian invasion of Ukraine, but when it comes to Israel’s flagrant violation of international law, the world is deemed to take a “cautious stance.” International media standards stipulate that the conflict be portrayed through the lens of “objectivity.” All the while, women and children are killed and international media outlets are getting bombed—aside from daily clashes resulting in a carved out land separated by a nation state which barely makes for a future Palestinian statehood.

Nevertheless, the world’s cautious stance towards the Israeli-Palestinian conflict stands in stark contrast to the almost unanimous show of unity towards the Russia-Ukraine war. While the Russian aggression must be called out, the media still fails to bring to the surface the underlying causes of this aggression.

All the media portrays is Russia’s act of aggression, looking the other way when it comes to debunking the Western version of events where NATO’s expansion in Russia’s backyard amounts to a national security threat as the West wrestles Ukraine into its fold.

Russia argues that a preceding “Western aggression” triggered its reactionary response, which culminated in the invasion of Ukraine. If memory does not serve us well, history does. History may be narrated by those who write it, but war crimes are beyond being another point of view.

Just as the whole world is denouncing Russia, similar condemnation must go out to Israeli’s aggression through the systemic oppression and crimes of apartheid as documented by human rights organizations.

We must take the chance now, while we denounce the Russian aggression, to also call out the double standards of the West. Humanity cannot be measured by race, nationality or ethnicity. Humanity is not a point of view, there’s no ambiguity in understanding human rights values or characterizing human rights violations.

As the world rises to a just cause, it overlooks equally egregious violations committed elsewhere in the world. Last month, the story of a 5-year-old boy who fell in the well and was trapped for five days gripped not only the Moroccans, but the entirety of the Arab world as well.

The incident was followed by pan-Arab news stations around the clock, with live coverage of the rescue mission and analysts hosted before eventually mourning the death of the boy.

The incident that awakened the national conscience took precedence over equally atrocious events from the war in Syria and Yemen, to the on-going daily struggles in Palestine and Lebanon—the latter being a country that witnessed one of the largest non-nuclear explosions in history over a year ago and is now experiencing an unprecedented economic and financial instability.

Lebanon is mired in political turmoil while its corrupt elite are still enjoying recognition by Western powers, instead of being persecuted around the world for siphoning off national wealth into Western hideaways. In that sense, the West is enabling an abuse of its financial system and empowering corruption, which makes it complicit in fueling global conflict and insecurity.

A recent report published by Transparency International identified massive money laundering schemes of Russian elites. The report says: “For too long, leading economies have turned a blind eye to dirty Russian money for fear of standing up to powerful economic interests. Secrecy laws and lack of oversight from authorities have allowed the Russian elite to hide their wealth, funding corruption back home and abroad.”

At a time where Western governments should revise their secrecy laws and address lack of oversight, all we saw were some hollow sanctions imposed on oligarchs linked to almost £200m of property in London and the home counties and German authorities reportedly seizing a $600 superyacht belonging to Russian billionaire Alisher Usmanov in a Hamburg shipyard.

After three years of conflict, a resolution referring Syria to the ICC was backed by 13 member states of the Security Council only compared to 37 countries formally referring reports of atrocities committed in Ukraine to the ICC on day 8 of the conflict—the largest referral in history of the ICC led the prosecutor to actively begin an investigation into the war.

Western interpretation of international law is unsurprisingly stunning. When it was Syria being investigated, at a time when the country had witnessed over 150,000 civilian deaths and the displacement of millions, Russia and China veto meant that Western nations utterly failed to refer the country to the International Criminal Court (ICC), leaving the door open for more atrocities.

Ukraine accepted the jurisdiction of the court for crimes occurring on its soil whereas in the case of Syria, there’s no jurisdiction for the ICC to investigate crimes committed on Syrian soil.

As a human rights activist put it, “there’s political hypocrisy and there’s the law.” But it seems even the interpretation of the law is subject to Western interests and global power structures.

As the West denounced Russia’s support to pro-Russian separatists in Eastern Ukraine, the US forces supported the Syrian-Kurdish separatists in northeastern Syria—posing a direct threat to the national sovereignty of not only Syria, but Turkey as well.

The US supported the Kurds in the northeastern Syria, a resistance group thought to be an extension of the PKK (Kurdistan Workers’ Party)—designated as a terrorist group in Turkey, the EU and the US—long fighting for its independence in the southeast of the country.

While the invasion of Ukraine might prove to be a quagmire for Russia, the stillness of the West has fed into a long-lost Soviet glory over the rubble of a nation.  From the US support to groups such as the Kurdish separatists and their subsequent abandonment in Syria, to the US invasion and its bridal runway show in Afghanistan, it all lays bare the truths behind the power of law, and the law of power.