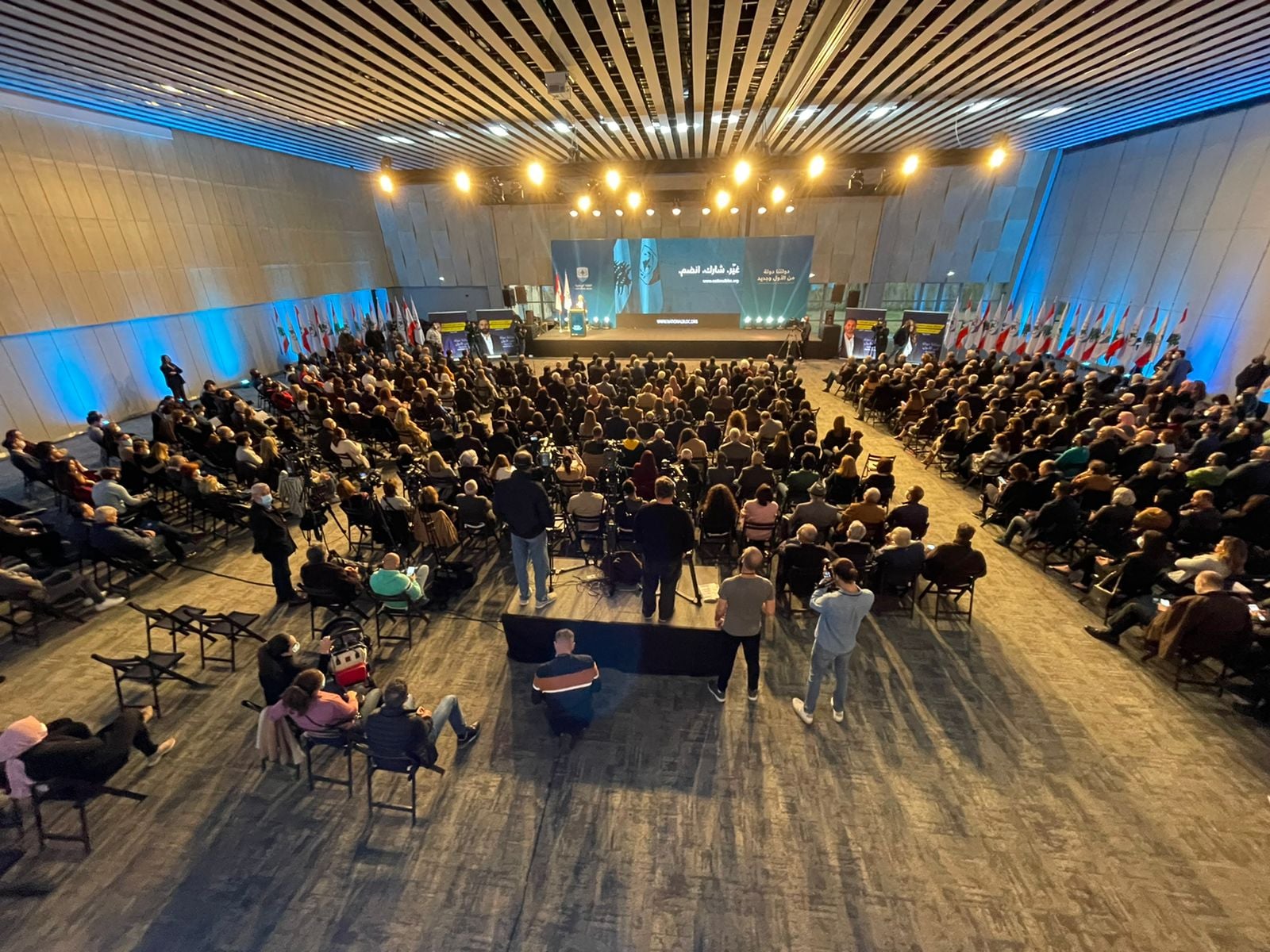 The Lebanese National Bloc launched its 2022 parliamentary campaign under the slogan “rebuilding our nation all over again” in a conference hosted at AVA Venue Achrafieh on Saturday, February 19.

The program is divided into multiple sections: Home of the People, Economy of Tomorrow, Time of Justice, Smart Cities Sustainable Villages, Power to the People, Lebanon is My Identity, and a Neutralized Sovereign State, and A Women’s Nation.

“All the forces for change have become united in an ongoing battle against the alliance of the militia and mafia, and in the continuous struggle to reveal the truth behind the August 4 blast that decimated Beirut,” said Pierre Issa, Secretary General of the National Bloc, in the introductory speech that kicked off the conference.

“We want to remain united, and preserve our spaces and leave them with nothing but alleyways and barricades,” he added. After Issa’s speech, each of the Bloc’s candidates gave their own speeches.

The National Bloc’s Attachment to the Taif Agreement

“The revolution was first a space to demand accountability reforms, social justice, and a secular state,” said candidate Kamil Mourani (North II). “Later, a well-defined political discourse that does not accept doubts or succumb to bids was established. It questioned the state’s right to use violence and demanded an end to the rule of militias.”

Mourani identified Hezbollah in his speech, describing the party as the “regulator of the system’s rhythm and its protector.”

Mourani said he agrees with the Taif agreement in this critical and delicate time in Lebanon’s history, stressing that alterations to the Lebanese constitution at this time will not incur positive change.

Gistelle Semaan (North III) emphasized the importance of regaining trust and described it as “the key to exiting the crisis.”

“The government today is incapable of doing that because of its members and their shortcomings and because it has lost the trust of the Lebanese and international communities. From this standpoint, certain qualities must be present in those in charge of public affairs,” she said.

Semaan defined these qualities as a clean past and present, successful life experiences, morals similar to the Lebanese public, and a clear sociopolitical and economic program, in addition to great personal qualities.

“Where did you get this from?”

“In our journey to parliament, we are counting on your votes and trust to hold them accountable and take back every dime they ever stole,” said Wajdi Tabet, the National Bloc’s Mount Lebanon I candidate.

Tabet stressed that the alliance will apply “the golden rule” of General Raymond Eddé, by posing the question “Where did you get this from?”

Michel Helou (Mount Lebanon III) gave the final candidate speech. “It’s true that the Syrian left and the Israeli left but the struggle is not over yet,” said Helou. “To build a state, we need true sovereignty.”

The National Bloc said that Israel has withdrawn from Lebanese lands—despite its occupation of Shebaa Farms and Kfar Chouba Hills, which both Lebanon and Syria have claims over.