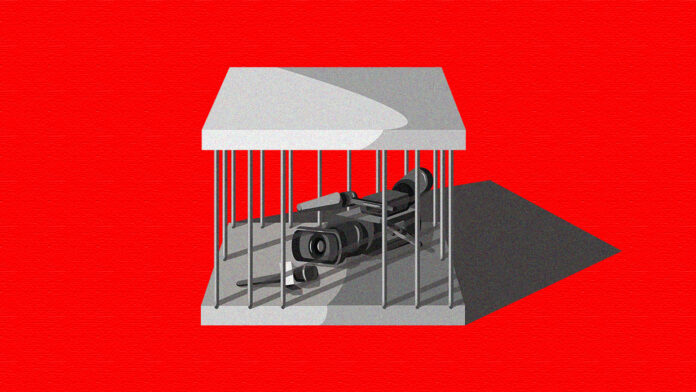 Between a self-preserving syndicate that represents the political parties in power and a change-seeking alternative that emerged with the October 17 revolution in 2019, the ongoing journalistic dispute in Lebanon stands in place as a microcosm of the country’s political conflict.

The Lebanese Press Editors’ Syndicate turned to the judiciary to prevent the Alternative Press Syndicate from carrying out any activity under penalty of an LBP 100 million fine for each violation, but was turned down by Judge Elias Salah Mkhaiber.

The head of Press Editors’ Syndicate, Joseph Al-Kassifi, had submitted the urgent legal request to Baadba last Friday in an attempt to prevent the alternative group from publishing any news, statements, or articles of any kind through visual, audio, and electronic media.

The judicial request came after the Alternative Press Syndicate submitted an appeal through its candidate Elissar Kobeissi to nullify the results of the syndicate election that took place on December 1, during which the alternative group documented ten violations.

The appeal to nullify lists Kobeissi being threatened with syndicate, disciplinary, and penal action upon demanding her rights and should she pursue legal action against the union.

“When the Lebanese Press Editors’ Syndicate submitted a lawsuit to gag and silence journalists, a fair decision was made to preserve freedoms as recognized by the constitution and treaties signed by Lebanon,” said Kobeissi. “The decision did justice to the Alternative Press Syndicate, and is evidence that judges can issue exemplary rulings that achieve justice.”

In a statement, the Alternative Press Syndicate said that the freedom of expression registered a victory in the face of systematic practices of oppression by the regime and its political, security, and syndicate tools.

The Press Editors’ Syndicate will appeal the judicial decision

The Press Editors’ Syndicate did not comment on the judicial decision, but a source from the syndicate told Beirut Today that its lawyer will go through the necessary judicial procedures to appeal Mkhaiber’s decision.

The source refused the claim that the syndicate was accused of trying to silence others. “This accusation is returned to the accusers, because we are concerned about the freedom of expression and the freedom of the press,” said the source. “What we’re trying to do is to prevent the use of the word syndicate because they did not obtain a permit to establish an association or gathering or club from the Ministry of Interior but are using the word.”

“We are defending our rights as a syndicate, want to preserve our legal status, and represent journalists and their interests,” asserted the source. “We will wait for the legal procedures being carried out by the syndicate’s lawyer.”

Kobeissi reaffirmed that the Press Editors’ Syndicate is silencing journalists instead of protecting them, describing the act as a discouraging start to a new council and a clear indication of the oppressive role it will play.

The judicial decision is tied to the constitution

Judge Mkhaiber based his decision on international and local conventions that Lebanon acceded to, as well as the preamble and Article 13 of the Lebanese Constitution—all affirming the need to respect and protect freedoms.

Mkhaiber considered that the “right to freedom of opinion and expression constitutes one of the essential pillars of a democratic society, and plays a pivotal role in both protecting citizens’ rights and maintaining democracy, the rule of law, and the development and reform of society.”

Mkhaiber tied the right to peaceful assembly to the right to freedom of opinion and expression, considering the link between them to be close. He cited Article 21 of the International Covenant on Civil and Political Rights, which states: “The right of peaceful assembly shall be recognized. No restrictions may be placed on the exercise of this right other than those imposed in conformity with the law and which are necessary in a democratic society…”

The judge also discussed the principle of proportionality, highlighting that the urgent appeals judiciary only takes measures that limit freedoms or lead to the implementation of censorship prior to publication in exceptional cases and only after it is proven that the right to preserve an individual’s reputation has exceeded the right to information.

The legal request from the Press Editors’ Syndicate did not include evidence of any offense by the Alternative Press Syndicate nor any infringement on the former’s rights protected by law, according to Mkhaiber.