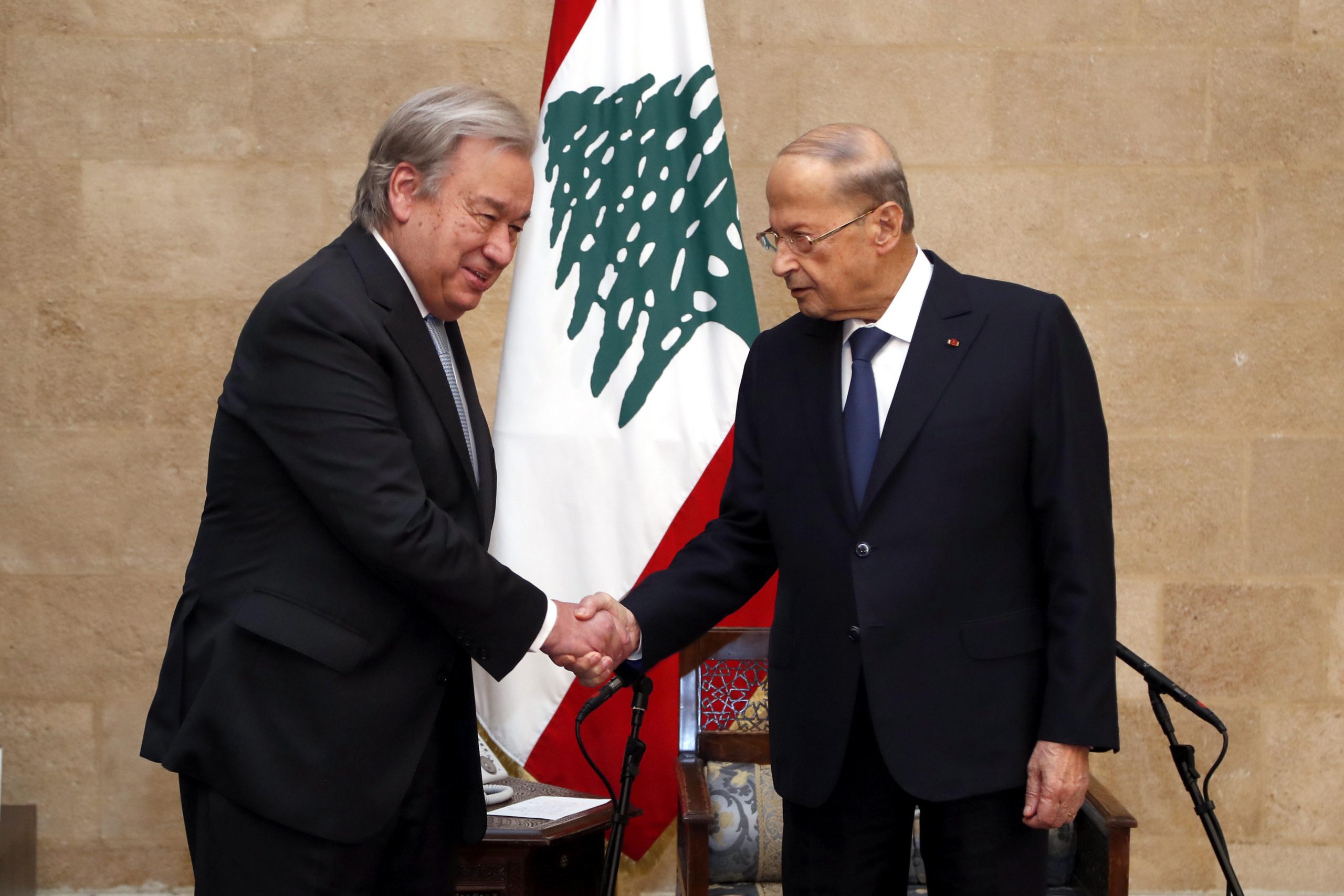 UN chief: Lebanese political leaders don’t have the right to be divided

United Nations Secretary-General Antonio Guterres urged Lebanon’s politicians to work together to resolve the local deep crisis and called upon the international community to strengthen their support of the country, in a press conference at the Baabda Palace on Sunday, December 19.

“The Lebanese people expect their political leaders to restore the economy, provide a functioning government and state institutions, end corruption and safeguard human rights,” said Guterres following his meeting with President Michel Aoun at the start of his visit to Lebanon.

On Monday, he toured the Beirut port to inspect damage caused by the August 4 explosion which left more than 215 dead, 6,000 injured, and 300,000 homeless. The UN chief also laid a wreathe at a memorial on site.

Lebanon’s leading politicians continue to evade and obstruct justice for the blast more than a year since it occurred, failing to show up for interrogation and filing multiple complaints to remove the lead investigator off the case by claiming he is “biased.”

“My objective is to discuss how we can best support the Lebanese people to overcome the current economic and financial crisis and promote peace, stability and sustainable development,” said Guterres at yesterday’s joint press conference with President Aoun.

Aoun asserted that efforts were underway to overcome the multi-layered crisis that has crashed the value of the local currency and left 80 percent of the population in poverty.

The president said officials are developing an economic recovery plan to present to the International Monetary fund, which Lebanon initially sought out in March 2020. Negotiations hit a stalemate in July 2020 because Lebanon’s central bank, banks, and politicians did not agree with the previous government on the scale of the country’s financial losses.

Yesterday, Deputy Prime Minister Saadeh Al Shami told Al Jadeed that a ministerial committee agreed with Central Bank Governor Riad Salameh that losses amounted to $69 million and that a preliminary deal could be struck with the IMF in January or February.

“The objectives are to expose officials to the losses that have befallen the country over the past years,” said Aoun. “The goal remains to adopt sustainable governance that corrects the imbalance that has plagued state institutions.”

International donors are declining to support the Lebanese government and public institutions, bloated by decades of corruption and mismanagement, before a reform plan is set.

Guterres said Aoun must be a symbol of necessary unity. “Seeing the suffering of the people of Lebanon, Lebanese political leaders don’t have the right to be divided and paralyze the country,” he said, calling the March 2022 elections as key to how the country moves forward.

Lebanon will welcome any UN support in the elections which, according to Aoun, will be “transparent and fair.”

More than 7,000 violations were registered by the Lebanese Association for Democratic Elections (LADE) during the 2018 parliamentary elections.

Watch | Why boycotting Lebanon’s upcoming election is being discussed

Aoun also asked Guterres and the UN to “find a new approach” to the displaced Syrians in the country. Guterres admitted that the international community “has not done enough to support Lebanon” and other countries that have opened their borders to refugees, with more powerful and wealthier states closing their borders.

Lebanon hosts the largest number of refugees per capita in the world, with an estimated 1.5 million Syrian refugees residing in the country. Nine out of ten Syrians in Lebanon are living in extreme poverty—and politicians often blame them for issues that preceded their arrival to the country.

Guterres will meet with political, religious, and civil society leaders during his three-day visit, and is being accompanied by Jean-Pierre Lacroix, Under-Secretary-General for Peacekeeping Operations; Rosemary DiCarlo, Under-Secretary-General for Political Affairs and Peacekeeping; Joanna Wronecka, Special Coordinator in Lebanon; General Stefano Del Col, Commander of the Interim Force in Lebanon; and Miguel Graca, Director and Coordinator.