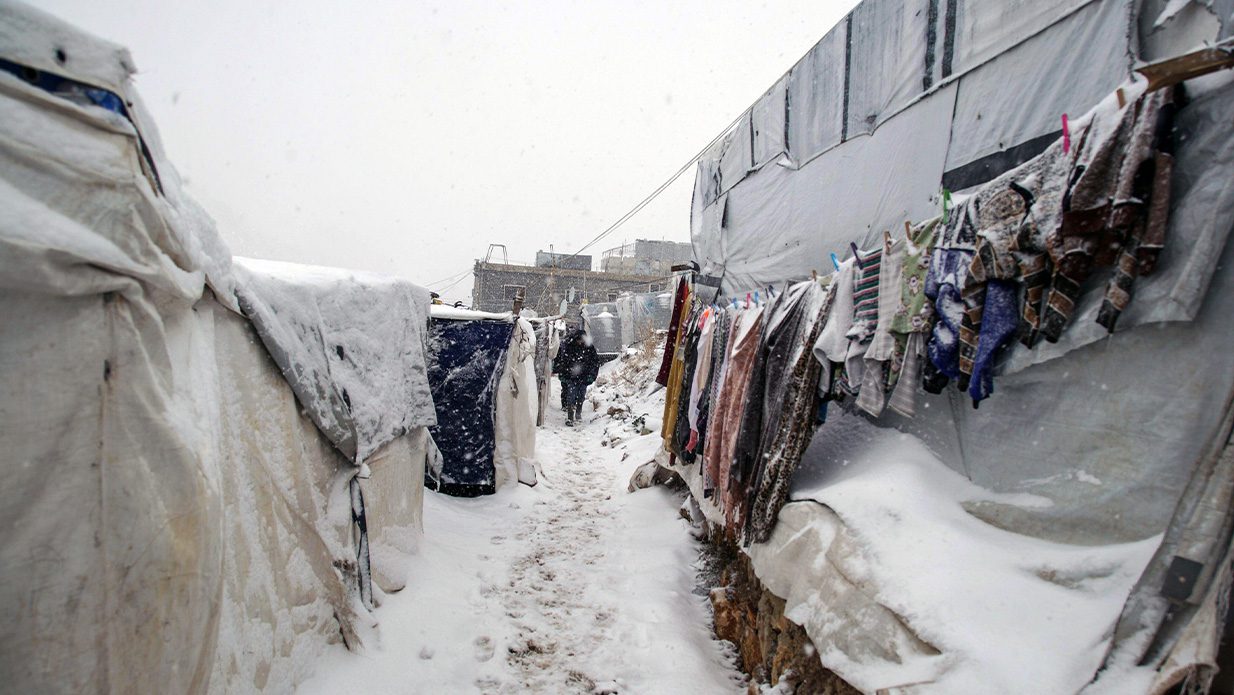 This year marks the tenth winter Syrian refugees spend outside of their country, leaving their homes and livelihoods behind after fleeing a war that discriminates against none. In doing so, they sought out safer and more stable countries, including Lebanon.

While the majority of refugees in Lebanon reside in apartments or stable homes, an unofficial 20 to 30 percent live in camps concentrated in areas with extremely harsh winters—such as the Bekaa Valley and Akkar.

“Before 2019, camps were able to cover basic winter necessities as a result of savings, production, or resources available to them, in addition to aid from the UN and grants from local and regional organizations,” Field Coordinator Meshaal Hammoud from SAWA for Development and Aid, a civil society group dedicated to Syrian refugees’ rights in Lebanon, told Beirut Today.

However, the coronavirus outbreak, the economic crisis, security instability, and the lack of resources in the present day have changed that. Syrian migrants in the Bekaa Valley camps and Akkar are now facing extraordinarily difficult conditions, due to the lack of heating equipment and food aid.

“It is now difficult to provide the bare minimum of the camps’ needs,” said Hammoud.

The Dalhamiye camp in Bar Elias reflects the harsh reality of the displaced in winter. Bar Elias is a town in the Zahle district of the Bekaa Valley governorate, and can be easily reached from multiple directions and through the center of the valley. It is 900 meters above sea level, and about 51 kilometers away from Beirut via the Damascus–Chtaura highway.

The camp was renovated in 2017, and consists of 76 tents that 83 families live in—around 350 individuals in total.

During the past two autumn and winter seasons, many families in the Dalhamiye camp suffered because they lacked tarps used to cover the tents from rain and sun. Local and international organizations had to intervene to provide winter aid, including Sawa.

Launched in 2011, Sawa joins volunteers and activists from multiple nationalities underneath one roof with the aim of supporting Syrian refugees, ensuring their access to rights. It also conducts research on various topics and keeps in track with important issues pertaining to them.

“To understand the situation this year, local and regional organizations began preparing the camp for winter by securing tarps and firewood. Fuel cannot be secured due to the exorbitant prices,” said Hammoud.

Paired with the coronavirus pandemic, the country’s economic crisis, and the lack of essential resources in local markets, the exorbitant increase in fuel prices is a significant barrier to winter preparations in refugee camps and across Lebanese households.

It is now being sold for over LBP 300,000 per tank, or at nearly half Lebanon’s monthly minimum wage, in light of the devaluation of the local currency by more than 90 percent since the start of the crisis.

While many initiatives are working to provide services, Hammoud says that 80 percent of Bar Elias residents are in need of aid and that 40,000 refugees reside in the area. The displaced are living with minimal protection from the cold and primitive medical assistance.

Not enough aid goes through

According to Mohamad Hassan, the director of the Access Center for Human Rights (ACHR), the lack of coordinated aid planning leaves the displaced to fend for themselves against the biting cold of winter.

Aid related to both repairing and building tents, as well as providing temporary heating solutions across refugee camps, is costly and scarce. Hassan also says the suffering of refugees is not limited to the winter season, despite it being harsher than others..

ACHR was launched in 2017 as a legal non-profit and non-governmental human rights organization in both Beirut and Paris. It specializes in monitoring the human rights situation of refugees, and publishes periodic publications on mass violations against them.

“The collapse of the economy in Lebanon worsens refugees’ living conditions,” said Hammoud. “Around 30 percent of refugees only receive aid that, with the current inflation rates, does not suffice as a family allowance for a few days.”

“The UNHCR must have been able to save part of its total annual budget due to the COVID-19 pandemic and remote working,” said Hammoud. “With those cutbacks in cost, it should put in place a serious plan to aid those displaced in temporary homes and refugee camps.”

According to the latest statistics from the United Nations’ High Commissioner for Refugees (UNHCR), around 865,000 refugees are currently registered in Lebanon. Unofficial numbers estimate the displaced in the country to be around 1.5 million.