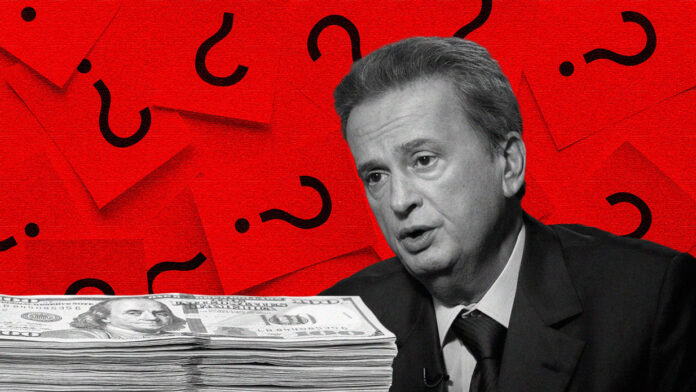 Lebanese Central Bank Governor Riad Salameh says the audit he ordered of certain transactions and investments within the central bank has exonerated him and his brother of any accusations of fraud payments and fees.

In a statement, Salameh said he had commissioned an unnamed firm to carry out an audit of the central bank accounts after several allegations came up against him and his brother Raja of transferring central bank funds into their own private, off-shore accounts.

The statement said that the audit had shown that “not a single penny” was used from public funds to pay fees and commissions to his brother’s company, Forry Associates LTD.

Raja Salameh has not commented on the case thus far.

“No funds from BDL were deposited on this account,” it said.

In the past two years, Salameh has come under heavy scrutiny by media outlets and the Lebanese public alike, which have jointly held him responsible for Lebanon’s economic collapse. Many have even come to accuse Salameh and other members of the ruling class of having conducted one of the world’s best Ponzi schemes, stripping Lebanese account holders of their savings.

Salameh said the audit’s findings would be shared with judicial authorities and any other relevant people.

Authorities in three different European countries are currently investigating Salameh for the above-listed claims, including one Swiss inquiry that states that Salameh “aggravated money laundering” at the central bank, involving $300 million in gains by a company owned by Raja Salameh.

Salameh largely attributes his vast wealth to his successful career as a private banker in Merrill Lynch for around 20 years, which earned him an annual income of about $2 million before he left the company in 1993.

According to Salameh, his net wealth was around $23 million in addition to inherited assets at the time. He says he has invested a large sum of that money, leading it to grow in value.

As a prerequisite for international aid and bailout plans, the International Monetary Fund and other Western governments have repeatedly requested that the bank undergo a forensic audit by a third, independent firm to better understand where the funds have disappeared.

Citizens took to Twitter late Wednesday evening to express their lack of trust and disdain with Salameh’s audit, saying he had actually commissioned himself rather than requesting a proper financial firm to complete the task.

Mohamad Kraytem on comics, learning to draw, and his pets | Quickfire Questions

The long and winding road to Lebanon’s economic recovery

On the importance of media literacy

Jinan Nabaa - September 29, 2022 0
The number of internet users in Lebanon reached 6.01 million at the end of January of this year, which roughly equates 89.3 percent of...

TK Maloy - September 28, 2022 0
Roni Helou, one of Lebanon’s top young fashion designers, has in the five years since launching his signature designs ascended rapidly in the profession. The...

Rayane Al Shami and Shaza Wannous - September 26, 2022 0
Since the summer of 2019, Lebanon has witnessed an accelerating economic collapse - the worst in the country's history - exacerbated by the horrific...

Yara Asmar on puppet-making, her favorite instruments, and time | Quickfire...

Lynn Sheikh Moussa - September 26, 2022 0
In this episode of Quickfire Questions, artist, musician, filmmaker and puppet-maker Yara Asmar talks to Lynn about the metallophone, ambient music, and her one...

Hanin Haidar Ahmad - September 26, 2022 0
Jina al Dar, an initiative by ABAAD, tours the country with the goal of empowering women and girls to prevent and reduce violence against...

Maha Khazem - September 20, 2022 0
Bassem Sheikh Hussein stormed Hamra’s Federal Bank on August 1. He was armed with a gun and tank of gasoline, and held around 7...