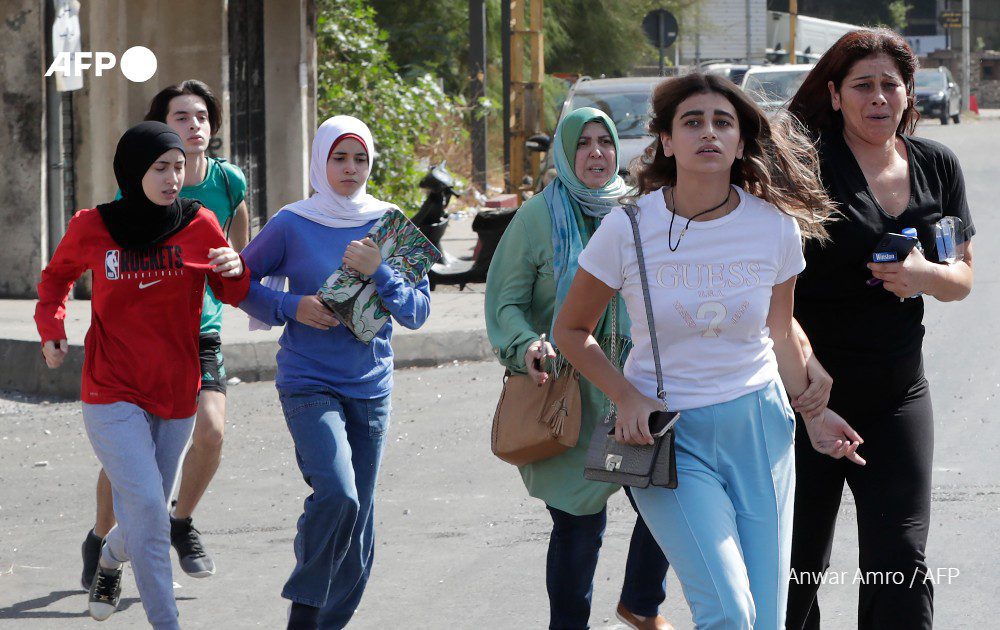 The Tayouneh incident: The people vs the people

The October 17 revolution blew its wind of change and, with it, brought hope for the rebirth of a country marred by sectarianism and fueled by decades of corruption and nepotism.

The younger generation was thought to have been the engine of change, or rather, the game-changers. They were able to present a discourse that has long been missing in the public debate, one that is no longer accepting of the core foundations upon which the ruling class has been feeding off. The youth had categorically rejected all that the deep state has been advocating for.

Following the Tayouneh incident, there was a heightened level of anger and rejection against “the other,” the other mainly taking the form of Hezbollah and its supporters in public discourse for questioning the impartiality of Judge Tarek Bitar in the Beirut blast case.

Whether on TV shows or in public debates, one stark argument surfaced in opposition to what was considered Hezbollah’s defiance of the course of justice. The argument centered around how Hezbollah’s judicial overreach was the direct cause of the incident, which resulted in the killing of seven protestors and the injury of dozens.

THERE’S A PREVALENT VIEW THAT VINDICATES THOSE WHO FIRED AT THE PROTESTORS AND ACCUSES THEM OF DRIVING THE COUNTRY TO THE BRINK OF A CIVIL WAR.

Traditional parties calling for the disarmament of Hezbollah argue that they have exhausted all their civil options with the group and were unfortunately left with taking the violent route to fight fire with fire.

What is surprising is that some of those who hold this view are young men and women who belonged to the October 17 revolution, while others were enrolled within traditional parties such as the Lebanese Forces and Kataeb.

Some others are still vaguely unable to find their place, as ironic as it seems. They still define themselves as being in support of their political leaders and enrolled under the 17 October revolution—the very same revolution their leaders were being targeted for.

The very generation that was relied upon for an overhaul of the system is giving these remarks, falling into the trap of the ruling class in a failed system, albeit through the seemingly always-in-fashion traditional methods of stoking fear and anger.

“We’ve had enough … for how long do you think we would permit being pushed back in our own backyard?” one asked in reference to Hezbollah’s protests that ran down the “Christian” neighborhood of Ain El Remmaneh.

This dangerous rhetoric justifies the use of violence when/if democratic routes have failed to bring about the desired change. Some international news outlets have also wittingly or inadvertently supported this logic by portraying the clashes as if it were the Christian areas under attack by Shiaa Muslims, further fanning the flames of sectarianism.

It shies away from giving the full picture by stating that the casualties were all from one sectarian group, further perpetuating a narrative put forth by security apparatuses.

Calls for the disarmament of Hezbollah and the country’s disengagement from regional conflicts are one of the basic requirements to transition into a civil and democratic state. But to justify the use of violence erodes all the slogans that political parties, including the Lebanese Forces, have long been chanting: Equally culpable are those who remain silent, as silence is endorsement.

An equally shocking picture was the protests that once again brought together young men and women who stood against the summoning of LF leader Samir Geagea to testify over the Tayouneh incident. The same party that launched an offensive over Hezbollah’s obstruction of justice is now obstructing justice in its defense of the “Zaim” or leader.

IT SEEMS, FOR ALL PARTIES, JUSTICE IS ONLY EVER APPEALING WHEN IT IS MOUNTED AGAINST THEIR OPPONENT.

Seeing the younger generation more eager about their Zaim than the blood of their fellow citizens stood in stark contrast to the scenery and kind of discourse they presented in the October 17 revolution.

The recent events raised a red flag and were followed by a national discourse that stoked fear and anger, as extremist views generate equally extremist views on the other end.

In the face of the mounting attack against Hezbollah, an Islamophobic rhetoric is brought to the limelight. Suddenly, Shiaa Muslims who do not identify with the party, some of whom are even vocal against it, found themselves having to stand up with the party line against a rhetoric filled with bigotry and hate.

Extremist rhetoric only serves the establishment, as it finds a way to steer public opinion back to realign itself with the sect and pits the people against people when the true goal is collective organization.

Deep-seated hatred only serves established political parties. It kills nuances from within the same group, it crushes non-conformity as individuals seek refuge within the party—the sect—when their fellow people turn their back on them. The systematic attack of Hezbollah, which has gone as far as to condone violence, only serves the party’s agenda. National discourse filled with hate and anger drives people to find refuge along party lines and conforms people to the status-quo.

And so in the framework of the country, this all begs the question: In the lead up to the parliamentary elections, what forces of change—if any—are we going to see? Will it be the establishment playing the people, or will there be an unforeseen turn of events for this seemingly invincible regime?