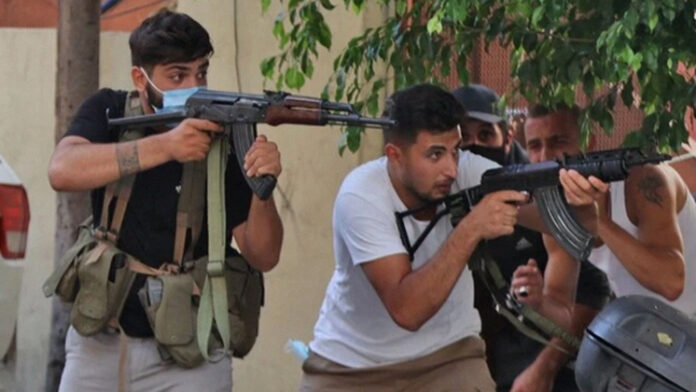 Gunfire by armed political factions in Beirut has killed at least six people and wounded more than 30 others, according to the Lebanese Red Cross.

As of now, guns have fallen silent for about an hour.

Pistols, Kalashnikovs, hand grenades, snipers and RPGs were used, as seen in videos circulating on social media platforms. The clashes come in light of a protest organized today in front of the Justice Palace by Hezbollah and the Amal Movement to demand the dismissal of Judge Tarek Bitar, who is the lead investigator in the Beirut Blast case.

Hundreds of protestors gathered in front of the Palace on Thursday to demand the removal of Bitar, accusing him of “political bias.” In the past few weeks, several MPs and suspects called in for investigation have submitted requests for his removal, including ex-MP Nohad Machnouk.

It is unclear who instigated the clash and the identity of the snipers remain unknown, but the nearby Tayyouneh roundabout witnessed long and heavy hours of violence. A joint statement by Amal and Hezbollah accused groups from the Lebanese Forces party of positioning snipers on rooftops and opening fire on protestors on the ground.

The identities and affiliations of the shooters were not immediately clear to many, but the Lebanese Army was soon heavily deployed in the area and warned that its units would shoot at any armed individuals in the streets or elsewhere. The clashes resumed for several hours.

Interior Minister Bassam Mawlawi told reporters that demonstration organisers assured him it would be peaceful, adding that security agencies did not have intel about the events that unfolded.

“The security agencies knew about the gatherings that took place, but had no indicators that could develop into shots in the head with live ammunition,” said Mawlawi, adding that an investigation is ongoing and the necessary security measures will be taken. “Civil peace between the Lebanese is not to be played with.”

The army evacuated the area, with many homes damaged in the blast and two women killed in their apartments by stray bullets. One jarring picture shows school children cowering in hallways as clashes escalated, with many on social media condemning the passing on of intergenerational trauma in a country that has witnessed constant violence.

Prime Minister Najib Mikati called for the restoration of calm and warned against attempts to drag Lebanon into violence. France, and the European Union, also voiced their concern over the security situation in Beirut, calling for an end to the clashes.