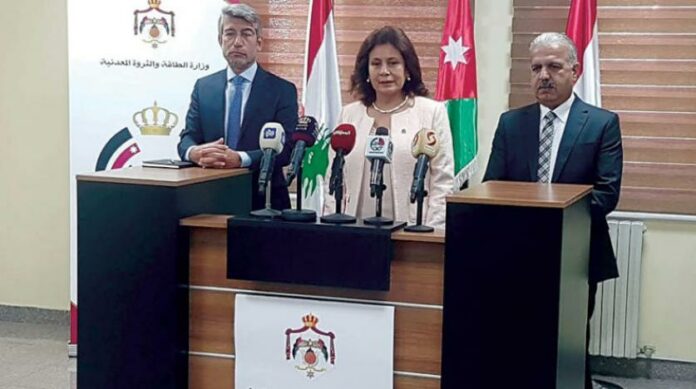 The energy ministers of Lebanon, Jordan and Syria agreed on the details of an electricity and natural gas transfer plan on Wednesday.

“I was agreed to provide Lebanon with part of its electrical energy needs from Jordan through the Syrian electrical network,” a statement from Jordan’s Energy Ministry said.

Fayyad also attended a meeting earlier this week in Cairo to discuss details of the plan to deliver Egyptian natural gas to Lebanon through the trans-Arabian pipeline, which goes through Jordan and Syria.

Zawati told reporters that a new action plan and a schedule for initiating the electricity interconnection line between Jordan and Syria was presented during the meeting, in addition to the necessary technical studies and agreements prepared to implement the supply process.

Lebanon’s severe electricity and fuel crisis has left parts of the country in darkness for up to 22 hours a day. The action plan aims to reduce the costs of generating electric power in Lebanon and ensure the stability of gas supplies to the Deir Ammar station.

She also stressed the importance of the meeting, which is part of a joint cooperation between Lebanon and Syria to support joint endeavours in the energy field.

Zawati added that a technical meeting was held on Tuesday with the stakeholders in the electricity transmission companies across the three countries in preparation for the ministerial meeting.

Earlier this year, Jordan assured Lebanon that it was capable of supplying up to 220 MW of electricity through the joint powergrid with Syria.

According to Syria’s energy minister Zamil, the workshops of the General Organization for Electricity Transmission and Distribution have already begun in order to fix the interconnection line, which sustained severe damage during the past few years largely as a result of the war in Syria.

The interconnection line has been out of service since mid-2012.

Syrian authorities have started collecting information on the generation plants to provide them to the Jordanian side, as part of the technical studies needed for the synchronous connection between the Syrian and Jordanian networks.