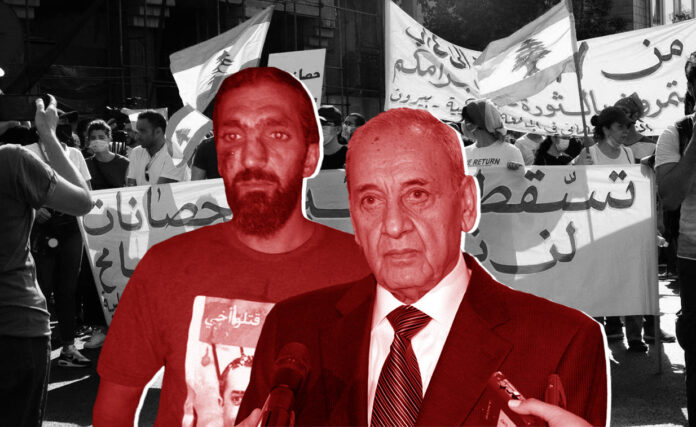 With only 39 MPs attending at the UNESCO palace, today’s Parliamentary session was cancelled for failing to meet the 59 MP quorum following pressure from the families of Beirut blast victims.

Prior to the session, hundreds of demonstrators and families of the victims of the Beirut blast gathered facing the UNESCO palace.

The families of the victims called on parliamentarians to boycott a proposal that stalls and undermines judicial efforts to hold senior officials accountable, the only item on the August 12 session’s agenda.

Major parliamentary blocs, including the Free Patriotic Movement, the Progressive Socialist Movement, the Lebanese Forces, and the Future Movement, did not attend the session.

The proposal by several MPs calls on senior officials to be investigated by the Supreme Judicial Council, which hears cases against former presidents and ministers, instead of the judicial investigator.

The session was also set to discuss MPs’ request for further evidence and documents from Beirut blast investigator Judge Tarek Bitar prior to granting him permission to lift parliamentary immunity and prosecute parliamentarians for their role in the deadly ammonium nitrate explosion. Bitar previously rejected their request to submit further evidence, his legal right.

“The law says the judge should provide them with a summary of the facts only, and he shouldn’t provide them with all the evidence because of the confidentiality of the investigation,” Legal Agenda lawyer and researcher Ghida Frangieh told Beirut Today in a previous interview.

See Also | Lift the immunity: A look into the Beirut blast investigation so far

The investigation has so far been stalled as many senior officials, including the head of the general security, have refused to sit for investigation under the guise that they are legally immune to such proceedings.

Families of the victims of the Beirut Blast also gathered to protest the session near Berri’s residence in Ain el Tineh, Beirut, on Wednesday evening, where they were attacked by men in civilian clothing.

Many identified these men as part of the parliamentary police, who have previously been filmed and photographed beating up peaceful demonstrators near Parliament in Downtown Beirut.

As these men continued to beat demonstrators, security forces reportedly stood idly by and watched. Annahar photographer Hossam Chebaro was viciously attacked and beaten on the head with sticks, his camera and motorcycle then confiscated. Other photographers also reported being attacked, including Hussein Beidoun and Zakaria Jaber.

According to a spokesperson on behalf of the families of the Beirut blast victims, the men accused them of insulting Berri before attacking them.

What kind of mental health support is available to Lebanese and...