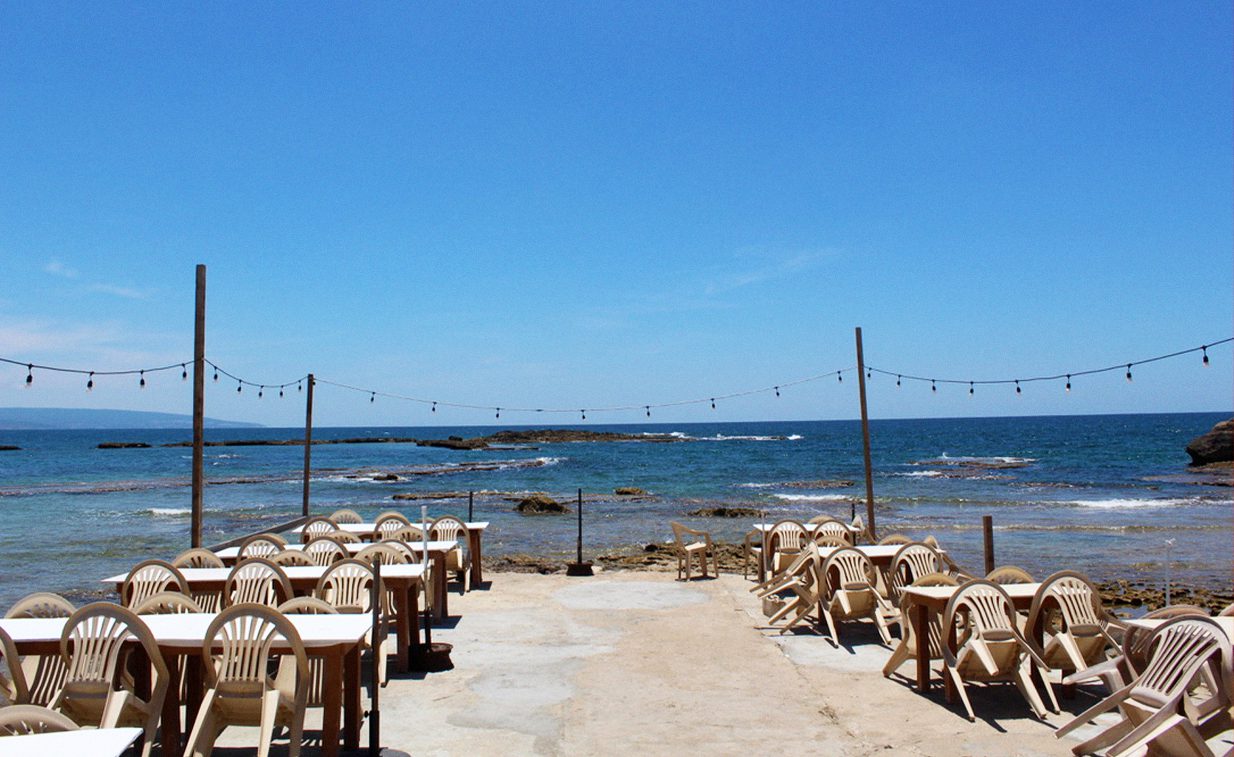 The city of Sour sweeps me away into a separate world I would describe as a charming storybook –but my mother would disagree. She knows the historic place, often described as “The Queen of the Seas,” better and has witnessed its evolution over the decades.

As one of the oldest continually inhabited cities in the world and a UNESCO World Heritage Site, the “Metropolis of Phoenicia” once garnered wealth and fame through its sea ports and maritime trade. Later, centuries of rotating colonial rule, entanglement with Lebanese sectarian politics as well as Israeli aggression would all leave their assertive mark on Sour’s crooked roads.

My earliest memory in Sour (or Tyr) is that of its shore, where my little toes would tickle the water and send joyful giggles up my spine. My mother, who grew up in the south, nurtured in me a nostalgic feeling of calm and belonging attached to the place, which we reserved to visit on special occasions and family trips.

The shore that retains my warmest memories is Al Jamal, a popular yet secluded place on the water where people would gather for afternoon lunches and argileh between dips in the rocky sea. The nostalgia the beach spot pushes to the surface is not reserved for my family alone, it reflects dissonant feelings of a magical and utopic past-Lebanon still rooted in current destruction.

Al Jamal has a cluster of seaside cafés run by generations of local men. It is a short strip along one end of the shore to the other where each café makes its own setup. Reached only through an alleyway sandwiched between a wall and a cemetery, this line of cafés has been in business for over 30 years, employing family and friends of the local populace.

A future hanging in the balance

Some speculate the shacks erupted on this particular shoreline as a result of the construction of the Nabih Berri Boulevard, which erased a significant amount of the sandy coastal line in the city.

Jad, an employee at the 3Ashtarout shack near the far end of Al Jamal, tells me that it is believed shack workers relocated to Al Jamal after a plan to remove the shore and build a street left them without work. With time, more people would set up shop and liven up that end of the seashore.

Their mission in adding to the spirit of the city has since been successful, giving a warm welcome to tourists and locals alike. Recently, it has grown more difficult to live up to their customer’s expectations for many reasons. But it all kicked off a couple of years ago when a project to renovate Al Jamal was announced.

The project was proposed and activated by the Municipality of Sour, which planned to beautify the seaside cafes, make them safer, environmentally-friendly, more professional and accessible to the public. Their promise for an economically and culturally beneficial social space for the people has since been postponed several times and put on hold due to multiple crises, including the COVID-19 outbreak.

Jad welcomes us into the shack, shoulders crispy brown and glistening with sweat under the heavy sunshine. Cautious yet eager, he motions for us to sit at one of the tables and politely recites the routine, “Can I get you anything?”. The dripping cold bottle of water arrived to waken the senses, pushing back against the heat and kicking off our conversation.

Jad tells me that he started working at the shack a year ago, after having been approached by his good friend, the owner. He naturally accepted the offer because he loves the sea and is used to working beside it.

When asked if he makes his whole living from working there, he explains that the shack only covers a part of his income but acknowledges that, for others, their salary is entirely dependent on these businesses.

“Even Ali, before he died, his life and his mother’s life were dependent on the shacks, and during his father’s days it was the same. His father had no other work but here,” he tells Beirut Today, recalling the story of a fellow coworker he knew.

I ask him whether the shack receives many customers.

“Yes, for sure, thank God,” Jad replies. He pauses, contemplating a moment before going on to explain that last year had been difficult because of all the problems accumulating after the project’s announcement.

“And this year, the problems are still ongoing. The shack owners refused the project proposition because under its plan, they are guaranteed work for only three years. And then it’s gone,” he said.

He waved his hand in the air at these last words, demonstrating the swift disappearance of the Sour shacks and their owners.

“They let them stay for three years, continuing their work and then some guy will come down, someone from outside who has millions. He’ll buy them all out,” he said  matter-of-factly.

For some, the fear of losing their jobs was more than just about unguaranteed employment in the future –it was also about losing a lifestyle and a rich history. Jad describes the shacks as the center and meaning of some owners and workers’ entire lives.

One such person is Hassan, who resides in the shack just left of Jad’s. Hassan tells me that he’s been working there for 25 years. I tell him he looks young, which garners a warm smile.

All the shack owners and their workers, their souls are tied to Al Jamal.

“So, you’ve been working here since you were five?” I asked.

Hassan and his friends would come to the shack together and help his father out. The image of the kids running around and resting by the shore in the late afternoon reminded me of my own time there as a child.

“Yes, exactly.” He continues, “And we work seasons. We work here during the summer and sit at home in the winter. We don’t have work in the winter.”

Hassan tells me he is not opposed to the project in Sour. “On the contrary, beautifying and renovating is very nice. My issue is with the three-year contract. There is talk of making it five years, but who knows what is going to happen.”

Hassan is less pessimistic than Jad, but I could still feel his stifled concern for the future.

“All the shack owners and their workers, their souls are tied to Al Jamal,” he tells me.

“We were in support of the project. It would be beautiful to fix it up. We are all for this. If there wasn’t the issue of the three-year contract, no one would stand in their way. The years are passing by fast. One year, two years, three, it’s nothing. You would set up shop and the next thing you know, the three years have ended.”

I ask if he has an idea of what he’d do once the project is put into action and his contract has ended. After some thought, he says, “We don’t know anything. One doesn’t have anything but this work. We’re not in normal times. We have no idea when things will be stable again.”

Jad has a darker view of the municipality’s project and contends that the eventual consequence is private individual gain.

“If you were coming to create a project for the people, you would need to remove all the conflicts, fix it up nicely and hand it back to the people, this is possible,” he tells me.

“You wouldn’t say no if they made the project something for the people?” I ask.

“Yes, and the shack owners have their rights of course. You can’t pay them then kick them out, no. The owners could be the ones directing the project, for example. It’s easy. It will stay theirs. You’re coming to clean and fix it up to create something for the people. But for you to come and take the place for your own private gain, of course not. They don’t say this, naturally, but we all know it will be this way.”

Both Hassan and Jad are weighed down by uncertainty. Their answers reflect their limited knowledge of the situation, and the frustration that ensues because of that.

Through the unfolding project, the municipality has gradually tightened the issuing of licenses and enforced road closures that affect the shacks and Al Jamal area.

The journey to and from the shacks must be taken on foot or by motorbike, as the general road leading to the area has been blocked off. This has limited customer turnouts. However, it has most of all, made operating the shacks and transporting the necessary materials and resources strenuous for workers.

It has also been prohibited for them to extend their terraces the way they normally do across the water.

“We usually widen the terrace by building the floor outwards on top of the water. We take it apart and rebuild it, it’s not concrete, it’s wood. We grow bigger for many reasons. First, because it’s more presentable. Second, the seating arrangement is nicer, and the swimming would also be safer because when we grow the platform over the rocks and place stairs, you would be able to go down directly in the water. But this is all banned now,” Jad explains.

The reasons for such decisions are unknown to the shack owners. Hassan expresses the same frustration at these limitations.

“The issue of the road, we don’t understand it. It is supposed to be open and organized. They should put supervisors to organize it,” said Hassan. “The licenses for expansion are also supposed to be granted. We are just like the shacks on the public beach. We are exactly the same. Their licenses have been granted. So, what’s the difference?”

The shacks, like all the resorts, hotels, and restaurants built on the sea, are not legal.

The Rest House, a 4-star and beach-side hotel, is primarily owned by Randa Berri –the wife of Nabih Berri, Lebanon’s Speaker of Parliament since 1992.

It has been two years under these conditions, and the multiple crises have only added to the suffocating circumstances. Jad speculates that the reason the project has not gone through yet is because there could be some internal disagreements about the plan itself.

He also mentions that there have been environmental concerns raised about how the project could affect the water and also cause damage to the Roman ruins across and around the shore.

“But they are determined to complete it. And in my opinion, they would do it for sure, because no one can stand in their way. Even the owners of the shacks. In the end, they will be bribed and bought and then they will be kicked out,” said Jad.

The confusion and lack of control on one’s livelihood and future are a reflection of the daily struggles that the Lebanese face in the irresponsible hands of a careless and criminal government.

“The issue is much bigger than these seaside shacks. This is only a symptom of the larger corruption that has made our country a jungle,” said Jad.

Further investigation is warranted and may reveal important details about the project to renovate Al Jamal. However, still kept in the dark, and their futures heavy with doubt, these men naturally dismiss the project proposed by untrusting superiors. There is little known about the project, its benefits and goals. It might well turn into a beautiful and accessible place made for the people of Sour.

However, the frustration of shack owners is not unwarranted –given the looming crises over the heads of every Lebanese person and Lebanon’s political history of perpetual dishonesty and corruption. The men on the seaside of Sour, a city where Roman ruins are only footsteps away from your nearby KFC, have lost their grip on a place rich with their own, and many others’, sense of belonging.