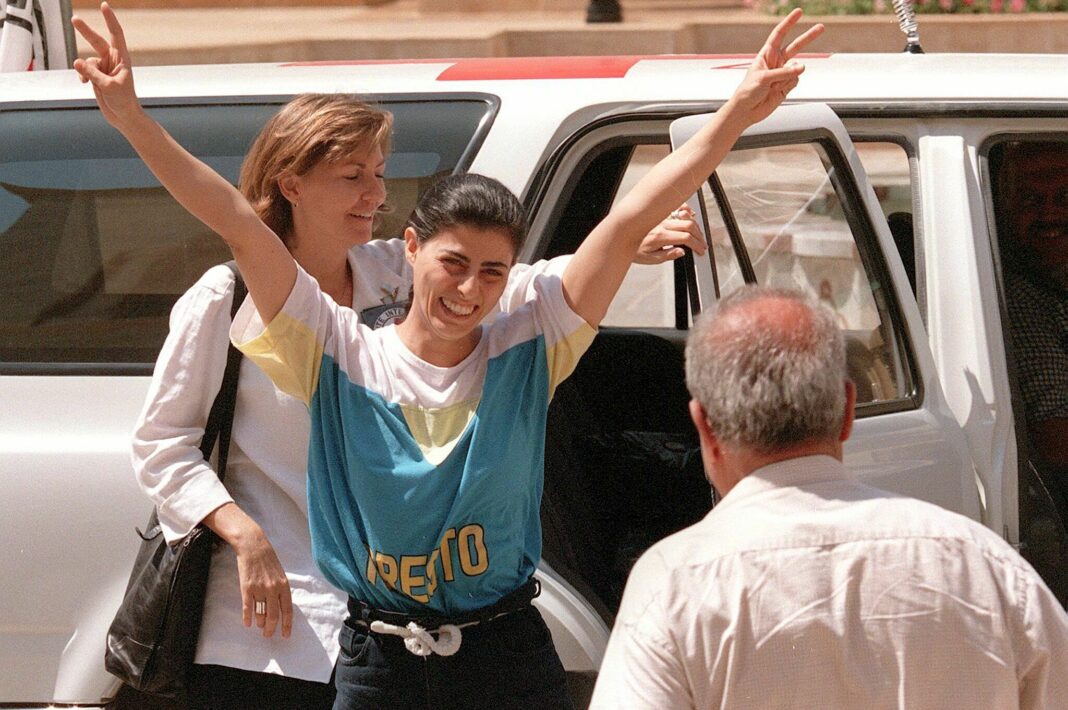 On 17 November, 1988, Souha Bechara undertook a dangerous operation: the attempted assassination of General Antoine Lahad of the South Lebanon Army (SLA), a Lebanese Christian-dominated militia founded during the civil war and funded by Israel.

The operation paralysed Lahad’s left arm, but failed to kill the general. The 21-year-old Bechara was found guilty for her crime, and would be imprisoned in the notorious Khiam prison in Southern Lebanon for the next 10 years. Yet in spite of her imprisonment, Souha Bechara would become a symbol of freedom, strength and resistance in Lebanon.

Today marks her 54th birthday. We take a look at the resistance fighter’s life, from her early years in Deir Mimas up to her recent participation in pro-Palestinian solidarity protests in France.

Souha Bechara was born in Deir Mimas, Lebanon and raised in an Eastern Orthodox Family. Her father, Fawaz Bechara, was a member of the Lebanese Communist party and Souha’s most important political figure.

“He was a communist and trade unionist, and had been so probably since his teens. I say “probably” because he didn’t drum his beliefs into our ears -quite the contrary. He was a silent man, though always ready to struggle for the cause,” wrote Bechara in her 2000 memoir, Résistante.

In March 1978, when Bechara was only 11 years old, Israel invaded Lebanon under the guise of “Operation Litani.” They officially withdrew later that year, but left behind a proxy militia which they funded: the South Lebanon Army.

Israel invaded the country once again in 1982, the year when the Sabra and Shatila massacre claimed the lives of anywhere between 460 to 3,500 men, women, and children. Israeli invaders were in the vicinity of the Palestinian refugee camps in Beirut at the time of the massacre, with journalists reporting that they connived at or coordinated the massacre with the Phalangists.

In her memoir, Bechara writes that the LCP “touched me deeply, waking parts of me long numbed by the fratricidal slogans and rallying cries.”

As a university student in Beirut, Becahra came into the public eye as a result of her communist politics and avid chess playing. She garnered multiple death threats from the Amal party, and was the subject of several attacks on the Lebanese left.

In one incident, Bechara was attacked with acid by extreme Islamists. Although it missed her, her mother retained some minor burns.

In 1988, Bechara undertook the assasination mission of Antoine Lahad. She headed to his home in south Lebanon, introducing herself to his wife Minerva as an aerobics instructor. She familiarised herself with the family’s members, and became a regular visitor.

On November 17, Lahad’s wife invited Bechara over for a cup of tea. She accepted the invitation and remained until Lahad himself arrived. Once he arrived, Bechara pretended to pack her belongings in preparation for her departure, but she then shot Lahad twice, once in the chest and once in the shoulder.

Bechara is said to have thrown the gun away as his bodyguards came to arrest her. As a result of Bechara’s shots, Lahad would spend eight weeks in the hospital, suffering serious health complications. His left arm was paralysed, but he survived the attack.

Bechara was taken by the SLA to Israel briefly for interrogation, where she was brutally beaten. Without a trial or any charges pressed against her, Bechara was then taken to the Khiam prison –known internationally as a symbol of human rights violation. She suffered electric shock therapy, and six years of solitary confinement in the prison’s notorious miniature cells –so small that you could only sit in them, but not stand or lie down.

Bechara was held in the prison for ten years, up until her release on September 3, 1998, following an intense Lebanese-European campaign for her release.

After her release from the Khiam prison, Bechara emigrated to Paris, France, and then to Geneva, Switzerland. She married a Green party politician, and became a mother to two children.

She began to teach mathematics, but continued to be politically active in her work with Collectif Urgence Palestine–Genève. In 2000, she published her memoir, which was later on translated to Arabic in 2000 and English in 2003.

She has had three film biographies made about her life and time in Khiam prison. In 2011, alongside former Khiam internee Cosette Ibrahim, she published her second memoir La Fenêtre: Camp du Khiam.

In 2003, Lebanese-Canadian playwright Wajdi Mouawad began the production of his play Incendies, largely based on Bechara’s life and Khiam imprisonment.

Most recently, Bechara took part in pro-Palestine protests in Switzerland during the 11-day war Israel waged on Gaza. Her politics and life continue to inspire generations of leftists and is the topic of many debates worldwide. Bechara is, and will forever remain, a symbol of communist, anti-zionist, anti-fascist resistance in Lebanon and worldwide.