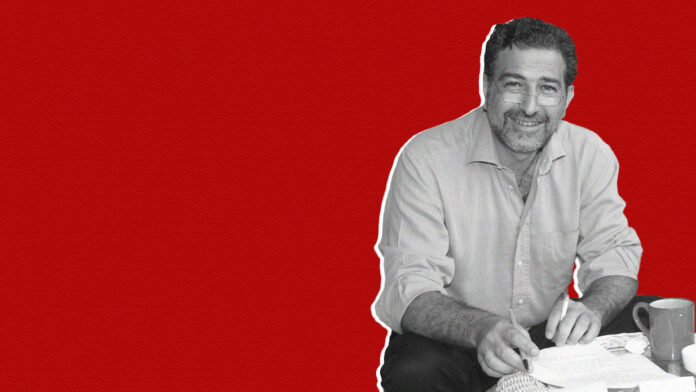 Today would have marked the 61st birthday of renowned Lebanese-Palestinian journalist, professor, activist and historian Samir Kassir. Kassir was assassinated in a car bomb in Beirut on June 2, 2005, only a few days after the country’s general elections.

The investigation into his death remains underway, with no one indicted so far. However, many in Lebanon speculate that the assassins were part of the Lebanese-Syrian security apparatus since he had been receiving constant threats from Lebanese and Syrian Intelligence Officers, particularly Jamil El-Sayyed, in the days leading up to his death.

So far, the Syrian government has denied these charges. On June 4, hundreds flocked to Beirut to attend his funeral ceremony.

The Life of Samir Kassir

As per the Samir Kassir Foundation, Kassir was born on May 5, 1960 to a Lebanese-Palestenian father and a Lebanese-Syrian mother. He grew up in the Ashrafieh neighborhood of Beirut, and attended the local Lycee Francais.

The Lebanese Civil War began in 1975, around when Kassir was turning 15. A few years afterwards, Kassir left Lebanon in pursuit of higher studies at Paris in the year 1981. By 1984, he had earned a Master’s degree in political philosophy from the Sorbonne (Universite Paris I), and would complete his PhD in contemporary history from Universite Paris IV.

While Kassir studied in Paris, he became a regular contributor for a few Lebanese newspapers, most notably Al-Hayat and L’Orient-Le Jour. He also wrote for Le Monde Diplomatique, with regular contributions to The Seventh Day, and the French edition of the Journal of Palestenian Studies.

At the time of his death, he was married to talk-show host Giselle Khoury, and is currently survived by two daughters, Mayssa and Liana, from a previous marriage.

His most notable achievements

In 1992, Kassir co-authored a French book with Syrian historian, publisher, and friend Farouk Mardam Bey on France’s policy in the levant, with particular emphasis on the Palestenian Nakba and the Arab-Israeli conflict.

In 1993, Kassir returned to Beirut and assumed a teaching position at the Universite Saint-Joseph’s political science institute, in addition to joining An-Nahar newspaper as an op-ed writer and the director of the paper’s publishing house.

In 1994, Kassir authored his second French book, titled The Lebanon War, largely basing most of the writing off of his doctoral thesis and discussing the conflict dynamics and the relations between internal and external factors during the Lebanese war, between the 1975-1982 period.

In 1995, Kassir launched his own publication, monthly magazine L’Orient Express. The publication skyrocketed Kassir to fame, quickly becoming the most prestigious cultural periodical in Lebanon. However, the publication was shut down in 1998 due to financial difficulties.

At the same time, Kassir founded his own publishing house, Al-Layali. The house was responsible for releasing several books of articles initially published in L’Orient-Express, in addition to catalogues of old advertisements for Mediterranean cities and Egyptian movies during the 1960 – 1970 period.

Kassir has authored multiple books, the most prominent of which are Histoire de Beyrouth, published in French in 2003 and then translated into English, and Being Arab, published posthumously by Verso in 2006.

Much of his work has been translated to foreign languages, including Swedish, Danish and Turkish.

Kassir identified as a left-wing activist, and strongly advocated for the freedom of Palestenians in light of the Arab-Israeli conflict, in addition to promoting democracy in Lebanon and Syria, and secularism in the greater Middle East.

At the time of Kassir’s residency in Lebanon, Syrian forces had yet to fully withdraw from Lebanese land. In light of this, Kassir advocated against Syrian presence in Lebanon. He was also known for his non-compromising views on the Ba’ath government, a popular pan-Arabist movement.

Despite his opposition to Syrian presence in Lebanon, Kassir was incredibly interested in Syria and developed close ties with many Syrian intellectuals. He helped found the Democratic Left Movement as a new political party in Lebanon, and in the 2005 general elections, the party succeeded in winning one seat in parliament.

The party played a key role in triggering a mass of protests following Prime Minister Rafik Hariri’s assassination on February 14, 2005.

Kassir was one of the few journalists unafraid to voice his strong opinions, making him known amongst the public for his courage. He chose to act as a mentor for several young pro-democracy activists, including Wissam Tarif.

Many believe that the journalist’s unwillingness to compromise and strong political views are what caused many to perceive him as a threat to the Syrian and Lebanese governments, eventually leading to his assassination.

Beyond Kassir’s political views and achievements, the journalist’s assassination triggered the start of an essential conversation on press freedom in Lebanon. The killing of a journalist for their unwavering ability to speak openly about politically taboo topics leads us to question whether Lebanon is truly a safe-space for the press, activists, grassroots organizations and others.

A look at Lebanon today shows that we are anything but the conventional definition of a democracy. The country itself has been praised for being a beacon of “democracy” and “freedom of speech” in a region known to suppress opinions and popular movements that oppose democracy, but those on the ground will voice a different reality.

While the world celebrated World Press Freedom Day on May 3, Lebanese journalists grieved the state of the industry. In past years, media in Lebanon was largely backed by political parties or organizations, creating an impenetrable monopoly for many. TV stations such as OTV or Future TV were funded by the political parties in exchange for biased representation.

As such, “objective” media had no room in the commercial or popular scene. Those who launched their own independent media platforms often suffered financially or received copious threats forcing them to shut down, as was the case with Kassir’s L’Orient Express and feminist writer Joumana Haddad’s Jasad magazine.

According to the Samir Kassir Eyes Center for Media and Cultural Freedom (SKEYES), around 106 media workers have come under attack by non-state workers from the start of the popular uprisings in October 2019 and until today.

The 2020 Reporters Without Borders World Press Freedom Index ranked Lebanon 107 out of 180 countries; a grim reflection of the state of freedom of speech.

In recent years, new independent media outlets have become active players on the scene, challenging these traditional conventions. Platforms such as Megaphone News, The Public Source, Daraj Media and Beirut Today are unafraid to publish content challenging the government’s proceedings and questioning the ruling class. Yet in spite of this, they are still faced with a number of financial, economic and political barriers.

Content published by such platforms are known to receive massive praise from like-minded individuals, normally part of Lebanon’s newer generation and active actors in the recent popular movements. However, they are also recipients of intense hate messages and backlash from followers of political parties, who find such platforms void of any use or purpose.

Even with their commitment to publishing ground-breaking content, these media platforms often have to seek outside sources of funding, usually in the form of grants, as the government is incapable and will, in any case, refuse to fund such mediums.

Independent journalists, intellectuals, activists and critics are also at heightened risk of danger considering the nature of their work. On February 4 of this year, prominent intellectual Lokman Slim was assassinated by unidentified assailants.

Slim was most famous for his criticism of Hezboallah, and is one of many coming under fire for their political views. Three months after his death, the investigation has yet to yield any new findings.

In spite of this all, independent media remain operative, with many advocating for the same principles Kassir stood for. The situation in Lebanon is dire across all fronts, and while the freedom of the press is not one of the more pressing issues in light of recent circumstances, it is well worth recognising the struggle media workers endure.