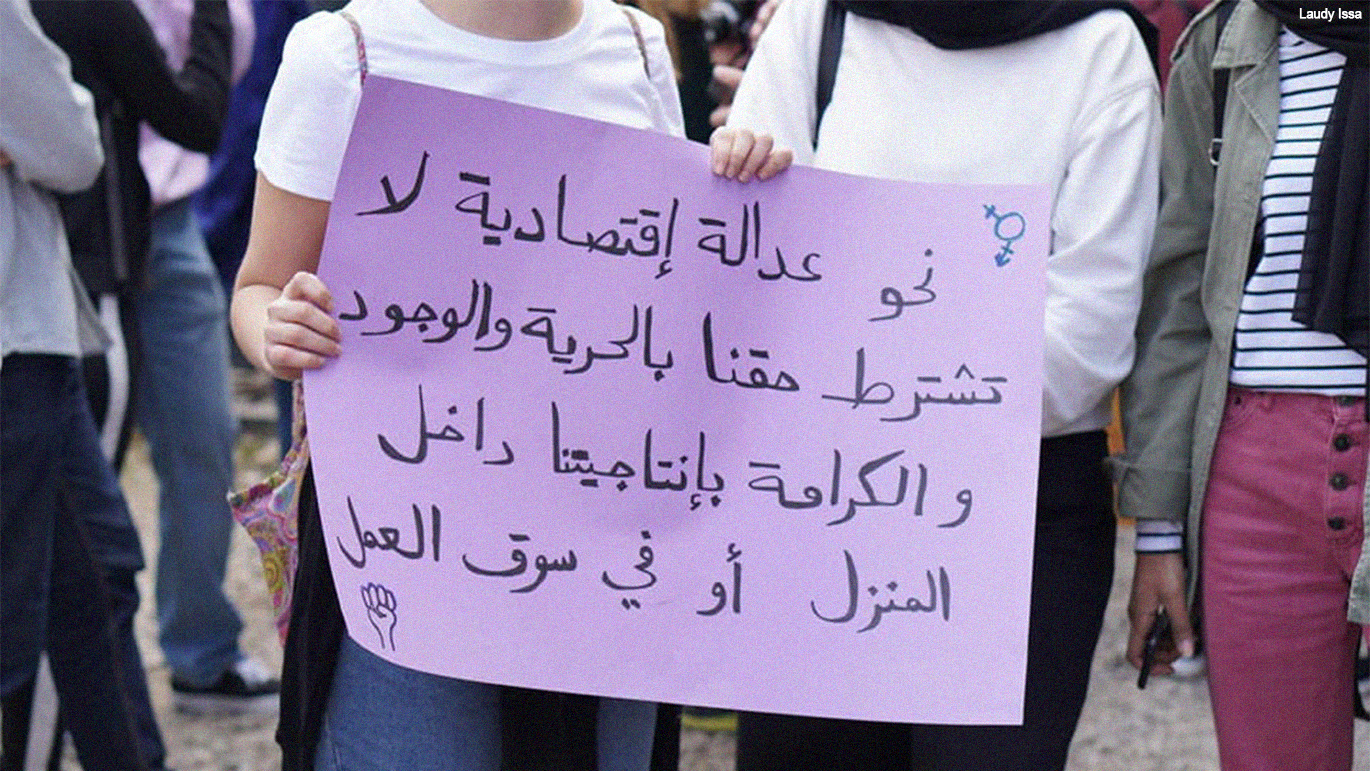 Every year on March 8, the world celebrates International Women’s Day as a symbol of the feminist sruggle and its demands to better women’s rights in the face of discrmination and gender inequality.

In 2021, we continue to see women demanding basic rights in the patriarchal Lebanese society that continues to wrong them under the guise of customs and traditions at times, and the cloak of sects and religions at other times. Women, who constitute more than half of our society, remain tied down by authorities using outdated and discriminatory laws.

This year’s IWD falls under the theme “Choose to Challenge,” a commitment to calling out gender bias and question stereotypes to create an inclusive world, and comes at a time when women are standing on the frontlines of the COVID-19 pandemic.

The National Commission for Lebanese Women (NCLW), an official institution working on women’s rights, launched its “From the challenge, change comes #ChooseToChallenge” awareness campaign as part of IWD.

Through this campaign, NCLW aims to highlight the achievements of Lebanese women, their excellence across different sectors, and their essential role in building societies.”

Aoun saluted the “sacrifices of women in Lebanon in various fields, as they have played a fundamental role in facing crises and responding to the needs and demands of society.”

Meanwhile, the United Nations Development Program prepared a one-minute animated video that sheds light on the multiple and essential roles that Lebanese women play in society. The video also calls for equal representation in decision-making processes.

The reality of women in Lebanon has its many woes, from outdated customs and practices that result in legislative and educational shortcomings to the COVID-19 pandemic and abysmal economic crisis that worsen domestic violence and women’s financial dependency.

“There are other necessary laws needed to protect girls and women and achieve equality between women and men, and we are still seeking to pass them,” said Aoun. “The most important ones are the law preventing child marriage, the law acknowledging Lebanese women’s right to pass their nationality to their children, and a unified personal status law.”

Social activist Nahla Salameh wondered about the “situation of Lebanese women today in light of gender discrimination, the economic situation, widespread unemployment, domestic violence, unfair legilative laws, and the failure to implement them in a way that is fair to women and grants them their rights.”

She told Beirut Today that Lebanese women, even during the COVID-19 pandemic, are still standing before spiritual courts demanding custody and visitation rights of their children despite all pushes under the feminist movement to raise the legal age of child custody.

According to Salameh, granting women custody of their children turns into the personal preference of each judge, who issues a decision according to each woman and how vocal she is on social media.

“Lebanon has not taken any step towards issuing a personal status law unified for all sects without discrimination and which guarantees women’s rights in matters of divorce, property rights, and custody of children after divorce,” said the activist.

In Lebanon, personal status is subject to a set of sectarian, legal and civil laws which differ according to the sect of each person. This negatively affects the rights of women and their children, especially in terms of divorce, custody, inheritance, and the age of marriage.

Aoun highlighted Parliament’s approval of the “Law to Criminalize Sexual Harassment and for Rehabilitation of Its Victims” at the end of last year as an “achievement in the process of eliminating discrimination against women.”

In 2014, Lebanese authorities approved a domestic violence law –a quantum leap in terms of securing legal protection for women and their families –that was amended in December 2020 to widen the definition of domestic violence as criminal practices that occur “during or because of marital life.” The amended law also included the types of punishable crime, notably including economic violence.

While Salameh acknowledges the importance of the law as a milestone in a country that has long considered harassment to be normal, she believes more can be done.

“This step is not enough to protect women in their workplaces,” she said. “There are harassment and extortion cases that happen in workplaces where the law cannot interfere as there is no written clause imposed on the employer not to harass and protect workers. Can a woman report her employer when harassment occurs without concrete evidence, for example?”

A semblance of International Women’s Day began to appear in 1909, when women raised their voices to reject discriminatory work practices and demanded their right to vote.

The first version of IWD can be traced back to March 19, 1911, when more than one million people protested for women’s rights in Austria, Denmark, Germany, and Switzerland.

In 1914, socialist women gathered on March 8 to demand their right to vote.

As for today in Lebanon, Aoun renewed NCLW’s pledge to support women.

“On this day, we renew our pledge to continue working on achieving equality between women and men in laws, to develop the public image of women, and to change the prevailing culture that does not recognize the full citizenship of women,” said Aoun.

“The situation of women and girls in Lebanon needs more awareness, personal protection and full laws without discrimination,” said Nahla Salameh. “Otherwise, women will stay stuck in the same loop without gaining their rights and without being treated as human beings with a right to live with dignity as stipulated by universal women’s rights.”

Women’s rights activists often ask why a law that acknowledges underage marriage as a crime against children and their right to a childhood has not yet passed in Lebanon, a fundamental question given the long-term negative psychological and social consequences that child marriage has on girls.

“The nationality law that grants the children of women married to foreign men the nationality has not been decided upon,” she said. “Lebanon’s failure to implement laws to protect women has led to many crimes recently. Women have not been treated with justice, and the law has not seriously dealt with victims of domestic violence even after they report abuse. The [legal] process is stalled and abuse may turn to murder.”

On March 8 of every year, the world remembers women –so it gives her flowers, shares tweets about her, or writes articles on her. But the role of women cannot be reduced to one day every year. Her struggle for equality, justice, and liberation continues throughout the year.