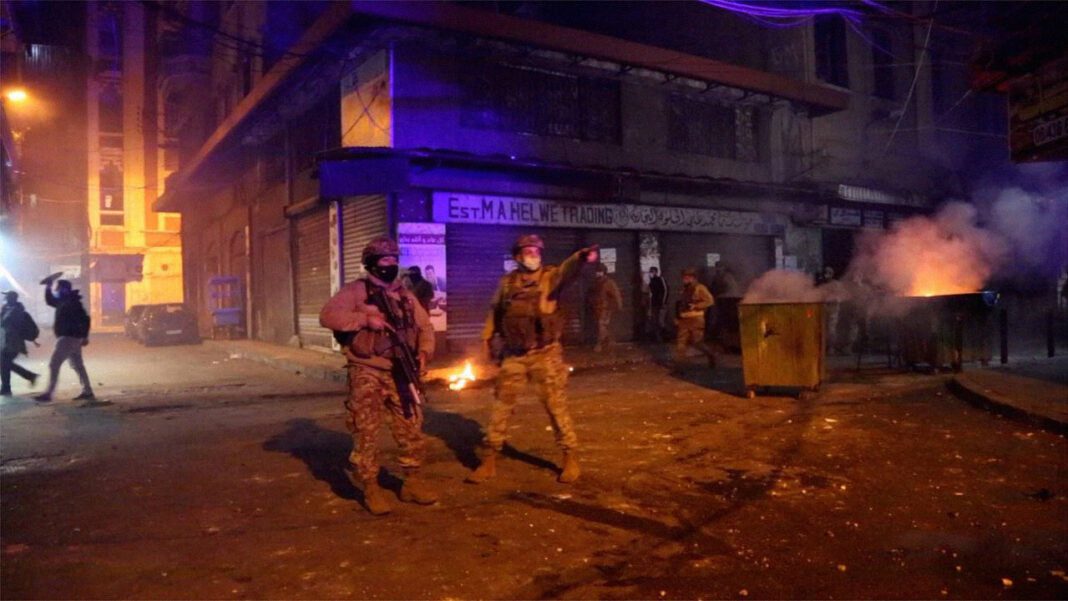 Lebanon’s Military Court has charged at least six protestors from Tripoli with terrorism and theft, as per a statement by lawyer Ayman Raad.

A live video posted by Lebanese lawyer and activist Wassef Al-Harakeh shows Raad explaining the court’s decision, stating that the Military Court is escalating the charges against the detainees under the premise that “every Shiite is an Israeli operative, and every Sunni is a terrorist.”

“They are painting Tripoli as a terrorist city, because a few people went down to protest,” said Raad.

Why the protestors were detained

On January 31, 24 people were detained in connection to the torching of the Tripoli municipality building during a protest earlier in that month.

Protests sparked as a result of widespread poverty and a lack of financial or social support from the government during the pandemic. In mid-January, Lebanon entered an incredibly strict COVID-19 lockdown with a full 24-hour curfew.

Demonstrations turned violent after a few days, following confrontations between security forces and demonstrators. Protestors attempted to storm the Serail while throwing rocks to renounce the lockdown.

On January 28, Internal Security Forces used live rounds against protesters and fatally wounded 29-year-old Omar Tayba. Tayba died the next morning at the hospital, from a bullet wound in his back.

This in turn partially led protestors to set the municipality building on fire the following day.

The conditions surrounding the arrests were the initial cause for concern: Detainees were not allowed to contact a lawyer or even inform their families of the arrests. Some reported undergoing beatings while detained.

See also | Protesters demand release of those arrested in Tripoli

The government has stated that those detained are suspected to have taken part in these violent acts, while many lawyers and activists remained doubtful of that.

“My husband and I were arrested last week, along with three other protestors, for no reason,” one woman who told Beirut Today at a solidarity protest for the arrested. “We were released that night, but my husband stayed for three days and there were no reasons for him to remain imprisoned.”

Many are still suspected to be unlawfully detained with no connection to the burning of the municipality building, and this sentiment was later echoed by lawyer Ayman Raad.

“Some protestors were arrested illegally,” said another protestor. “They summoned, arrested and even took some of them from their homes. They’re saying that they’re among those who went and burned the Tripoli municipality, but we say that the accusers are liars.”

Only a few of the detainees were released since their arrest, with around fifteen formally charged with rioting, forming a gang or assaulting security forces. They remained in custody before appearing before the Military Court for their charges.

As of now, the government appears to be silencing protestors in an attempt to halt demonstrations in Tripoli. Some detainees are still being denied the right to lawyers or to communicate with their families.