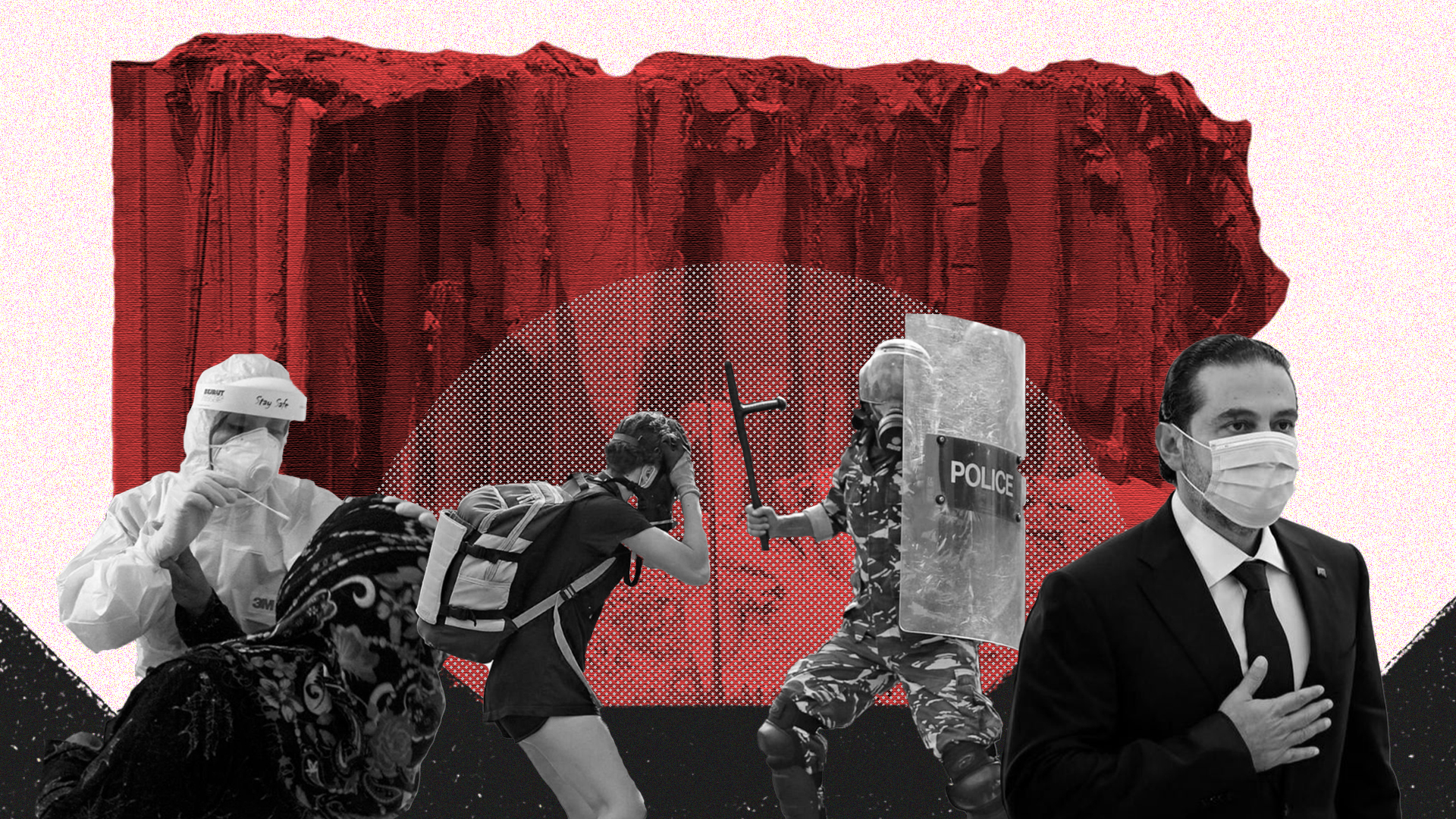 Remembering 2020: 12 terrible things in Lebanon that we shouldn’t forget

Like an alarm set and forgotten, Lebanon rudely awakened to a new disaster almost every month in 2020. And although the first day of 2021 already bore news of injuries caused by celebratory gunfire, we’re glad to say that Lebanon’s year from hell is finally in the rear-view-mirror of our barely-functional cars. Despite that, there are certain things that happened in 2020 that we should not –and often, cannot– forget.

The Beirut blast destroyed lives and the city

The August 4 explosion at the Beirut port left over 200 dead, thousands injured, and plenty more homeless. Caused by more than 2,700 tonnes of ammonium nitrate fertilizer haphazardly stored for years near some of Beirut’s most bustling residential areas, the blast is a painful reminder of the criminal negligence of the ruling class of warlords that have been in power for decades.

Months later, unexpected thunder still keeps us up at night because of the blast. At the same time, investigations into the blast have failed to hold Lebanon’s leaders accountable.

COVID-19 spiralled out of control

The deadly virus was well-contained in the first months of its arrival to Lebanon thanks to a strict but short-lived lockdown. When the lockdown ended, a series of bad decisions from the government, non-compliance of citizens with precautionary measures, and the port explosion pushed the number of cases to spiral out of control at the expense of the country’s strained healthcare system. Intensive care units in hospitals across Lebanon are at full capacity and doctors are emigrating elsewhere due to the financial crisis.

While vaccines are set to arrive in Lebanon during February, caretaker Health Minister Hamad Hassan warned that Lebanon will be entering “the eye of the storm after January 10” as a result of the holiday season surge in cases.

At some point, finding Panadol in pharmacies was difficult during 2020. A pharmacist at humanitarian group Amel Association told AP in November that six out of every ten brand drugs had become unavailable. That includes medication for heart, diabetes, cancer, and other chronic illnesses that can prove to be fatal if left untreated.

For now, friends and family coming home from abroad lug around suitcases of missing medication for their loved ones and strangers in need. 2020 is marked down as the year of panic buying, whether in the form of food or medicine.

More than half of the people are living in poverty

According to the United Nations Economic and Social Commission for Western Asia, more than 50 percent of the Lebanese population is living under the poverty line. The World Bank similarly estimates that 1.7 million Lebanese are now poor, or one-third of the population.

A joint study by the World Bank and the UN Refugee Agency highlighted inflation, which rose to 136.8 percent by the end of October, as the strongest reason behind the increase in poor families. As for 2021, the report sees no decrease in poverty for Lebanon in sight.

The Lebanese lira plummeted in value

The Lebanese lira lost more than 80 percent of its value since October 2019, severely limiting people’s purchasing power and destroying the value of their life savings. In 2020, the value of the lira reached a record low of LL 10,000 per one US dollar at some point on the black market, compared to the pegged official value of LL 1,507.5 per one USD.

Today, the local currency is valued at approximately LL 8,400 per 1 USD on the blackmarket –which is the rate used by most merchants and how supermarkets price their stock. Food prices have tripled in the past year, as the country’s unsustainable economy heavily relies on imports priced in dollars. With government subsidies on non-essential goods soon ending, many will be forced (and have already been forced) into skipping meals or a diet consisting of only bread.

When 2020 started, banking restrictions had already helped spark the fuel of Lebanon’s economic crisis by causing mass panic about depositors’ money and savings.

Depositors with dollar accounts now find themselves unable to withdraw in dollars, rather forced to withdraw a limited amount in liras –at the new LL3,900 per USD “bank rate.” Depending on the bank, the “international spending limit” now ranges between $0 and $50 dollars per month on average. Meaning, Lebanese people can just forget about any online purchases while the rest of the world shifts towards them.

Banks, however, graced us with the never-before-heard-of invention of “fresh money accounts.” Any hard foreign currency that newly comes into the country can be withdrawn with a pesky daily limit that forces you to look at the bankers you’ve come to despise for multiple days in a row. Meanwhile, Lebanese lira accounts also have limits and have lost more than 80 percent of their value on the market. The unlawful limit on how much of your own money you can withdraw per day and month caused (and rightfully so) hatred towards Lebanese banks.

Students could no longer pay their tuition fees

Whether abroad or within the country, Lebanese students are struggling to pay their tuition fees as a result of banking restrictions and the plummeting value of the lira. More recently, the American University of Beirut and the Lebanese American University of Beirut announced their decisions to price tuition fees at LL 3,900 per USD –with other universities following suit.

Such a decision takes away the future of Lebanon’s youth, whose families are most likely still getting paid at the official LL 1,500 rate and can no longer cover their fees. Meanwhile the Lebanese University, the country’s only public university, remains severely underfunded and overcrowded.

As such, students have taken to the streets –led by independent student groups–  to express their rage and protest against dollarization decisions only to be met with significant violence from internal security forces in cahoots with university administrations.

Police violence was not limited to students in 2020, but was generalized to many of the protests held since the start of Lebanon’s October Revolution in 2019. ISF and army forces used batons, tear gas, rubber bullets, and sometimes live rounds to suppress protesters who were demanding accountability and better living standards in Lebanon. Lethal force was used against protesters, health workers, and journalists alike on site.

Saad Hariri was reappointed as PM… for the fourth time

Much to the dismay of protesters, Saad Hariri was re-appointed one year after he was forced to resign as prime minister. He was tasked with forming his fourth government on October 22. On that note, Nabih Berri has been the Speaker of the Parliament of Lebanon since 1992 and 2020 did not change that.

Since then, Hariri’s task has proven to be impossible given the internal squabbles of Lebanon’s politicians –most notably at the moment, President Michel Aoun’s Free Patriotic Movement. And while Hariri claims to be forming a government based on skill and qualifications, it appears to be yet another attempt at slicing the pie to the benefit of Lebanon’s different sectarian leaders.

Multiple deaths related to sectarian clashes in Lebanon occurred during 2020. Most notably, gunfire broke out in Khaldeh between Sunni Muslims and Shiites that led to the death of a 13-year-old boy. Anti-government protests also had their fair share of sectarian tension, often with Hezbollah and Amal party supporters.

Similarly but on another note, Lebanese in Christian-majority town Bcharre forced an entire community of Syrian citizens to flee from their homes after a personal dispute between one Syrian man and one Lebanese man led to the death of the latter. In another form of communal punishment for one person’s actions, Lebanese burned down the tents of 75 Syrian refugees. More than 370 Syrians were forced to flee, their entire lives burned down in front of them.

In a recent survey, 56 percent of Lebanese respondents said they prefer a civil / secular system of governance. Despite that, only 37 percent said that authority positions historically reserved for specific sects should be available to all sects.

COVID-19 brought out the worst in xenophobic municipality curfews against refugees, and Lebanese politicians continue to scapegoat Syrians for the failing Lebanese economy as a way to push attention away from their own shortcomings.

Meanwhile, a law to “end the Kafala system” in Lebanon and provide migrant workers with their most basic rights (like Sundays off, a maximum number of hours of work per day, permission to contact their families, and a less-than-decent minimum wage) did not pass because of lobbying by migrant domestic worker recruitment agencies that are likened to centers for modern-day human trafficking.

Women in Lebanon continue to live as secondary citizens. New legislation passed in December to criminalize sexual harassment in Lebanon and penalize offenders with fines and prison. Despite that, the law blatantly omits marital rape. On another note, women are still underrepresented in politics, can’t pass their nationality to their children, and face a wide array of stereotypes in public life.

Remember when Lebanon’s Interior Minister, Mohammed Fahmi, said that women can’t be prime ministers in Lebanon because they’re too fragile? And to “let women go back to cooking” on Sundays when delivery services are not operating because of the COVID-19 lockdown? Yeah, that was this year and not in the Stone Age.

As for the LGBTQ+ community, Lebanese officials can’t even be bothered to pretend to care for its rights. Lebanon was the only country that refused to sign a statement by the Media Freedom Coalition that advocates for the safety of journalists because it included a phrase about the commitment to protecting members of said community.