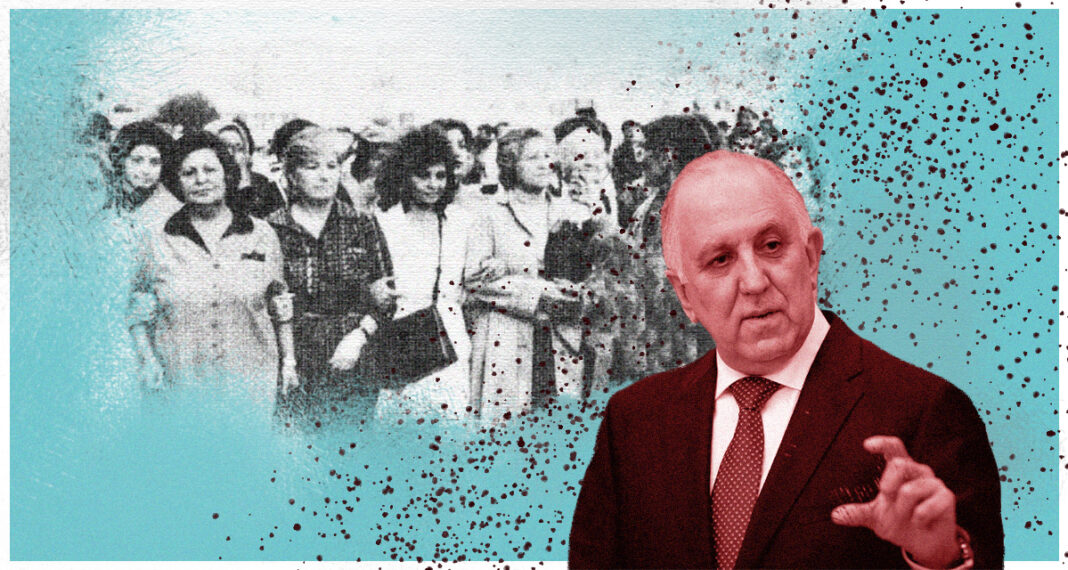 Lebanese caretaker Interior Minister Mohamed Fahmi has come under fire by the Lebanese public after making two sexist remarks in less than a week.

Last Saturday, Lebanon entered a two-week lockdown to curb the spread of COVID-19 following months of mass outbreak. One of the proposed lockdown measures was to ban food delivery services and shops from functioning on Sundays. When a journalist asked Fahmi what Lebanese people are expected to do in such a case, the minister responded by simply saying “let women cook.”

His second remark came the very next day, when asked by Neshan whether he believed a woman can take on the role of prime minister.

“Yes, but in the current situation in Lebanon, you need someone who isn’t gentle. The woman is gentle, the woman is soft and timid,” he responded.

Fahmi’s comments unleashed a massive wave of backlash online, as citizens came together to voice their anger and frustration at the sheer sexism and misogyny. Lebanon, despite being hailed as one of the most “progressive” countries of the Middle East, still maintains a patriarchal social structure upheld by misogynist men such as Fahmi.

The dominance of men within Lebanese political institutions has not only made these institutions inaccessible to women, but has essentially allocated the decision-making process to men.

A lack of representation

Lebanon has one of the lowest rates of women’s political engagement in the region. In 2011, Najib Mikati’s government came under fire for failing to include any female ministers among its ranks. Current president Michel Aoun, then the leader of the Free Patriotic Movement, responded by saying that “women lacked the experience for public service.”

Aoun has famously opposed giving women positions of power, urging them instead to fight for it.

Over recent years, few women have been elected into parliament or government. In fact, a growing trend has appeared with regards to female parliamentary members: Many of those elected had only reached these positions due to the death of a male relative. Nayla Tueini, for instance, inherited her parliamentary seat from her late father, Gibran Tueini.

Even when women are able to obtain seats within these political institutions, they are often either uninterested in advocating for gender equality reforms or are opposed at every turn.

Tueini, for instance, has failed to advocate for any gender equality reforms, despite the fact that she has been a victim of heavy sectarian and misogynist criticism due to marrying a man outside of her sect.

In more recent years, ex-MP Paula Yacoubian, one of the handful of women brought to power in Parliament within the last 10 years, has come under the same criticism simply for being a woman. Yacoubian has consistently proposed a number of bills aimed at achieving gender equality and eliminating corruption within the country, only to be met with adamant opposition.

A cruel reality for women

In light of a lack of representation within political institutions, and the inability of women in positions of power to drive long term change within the country, women remain the victims of a crippling patriarchal social structure.

The misogyny perpetuated by this structure takes on several forms, and Fahmi’s comment –unfortunately– only symbolizes the tip of the iceberg.

To date, issues such as domestic abuse, honor killings, sexual harassment and more continue to deter women’s ability to lead normal lives. In April 2020, a Lebanese man went on a mass murder spree, killing his wife and nine others, after he suspected that his wife and brother were having an affair.

A research done by ABAAD, a local NGO that aims to achieve gender equality in the MENA region, showed that the number of calls to their helpline had doubled in the first quarter of 2020. Calls to the ISF domestic abuse helpline had also doubled from March 2019 to March 2020. This is the period when Lebanon entered lockdown, forcing women into confinement with their abusers.

The judiciary system is still lenient on murderers who commit honor crimes as a result of rage induced by the victims.  Earlier in 2011, parliament annulled Article 562 of the criminal code, which mitigated the sentence of people who claim they killed or injured their wife, daughter, or other relative after witnessing a transgression, such as extramarital affair, to protect their family “honor.”

In 2014, Manal Assi was tortured by her husband prior to her subsequent murder. In spite of this annulment, Assi’s murderer was convicted with a lenient sentence of only five years in prison for the killing.

Local NGO KAFA led a series of protests in opposition of the verdict, and because of this, the case was then appealed and reopened at the Court of Cassation. In 2017, Mohammad al-Nhaily, the murderer in question, was given the death penalty.

What can be done?

Local initiatives outside of government, such as KAFA and ABAAD, have taken on the responsibility of combating gender inequality. Their work has been successful in filling some legal gaps in the system, giving women a safe space they can reach out. Yet in spite of this, there is only so much that these institutions are capable of doing without being met with some form of legal opposition.

Even when working within a political or legal framework, long-term change is difficult and tedious to implement due to the deep-rooted corruption and failure of the systems and structures at play.

To guarantee women their full set of rights, the system itself must be dismantled and replaced, because it is this system that has led to the rise of misogynist politicians who have denied women the right to lead safe, and healthy lives.

Until then, comments such as Fahmi’s will continue to be made, while activists, initiatives, and political groups lead the towards gender equality.