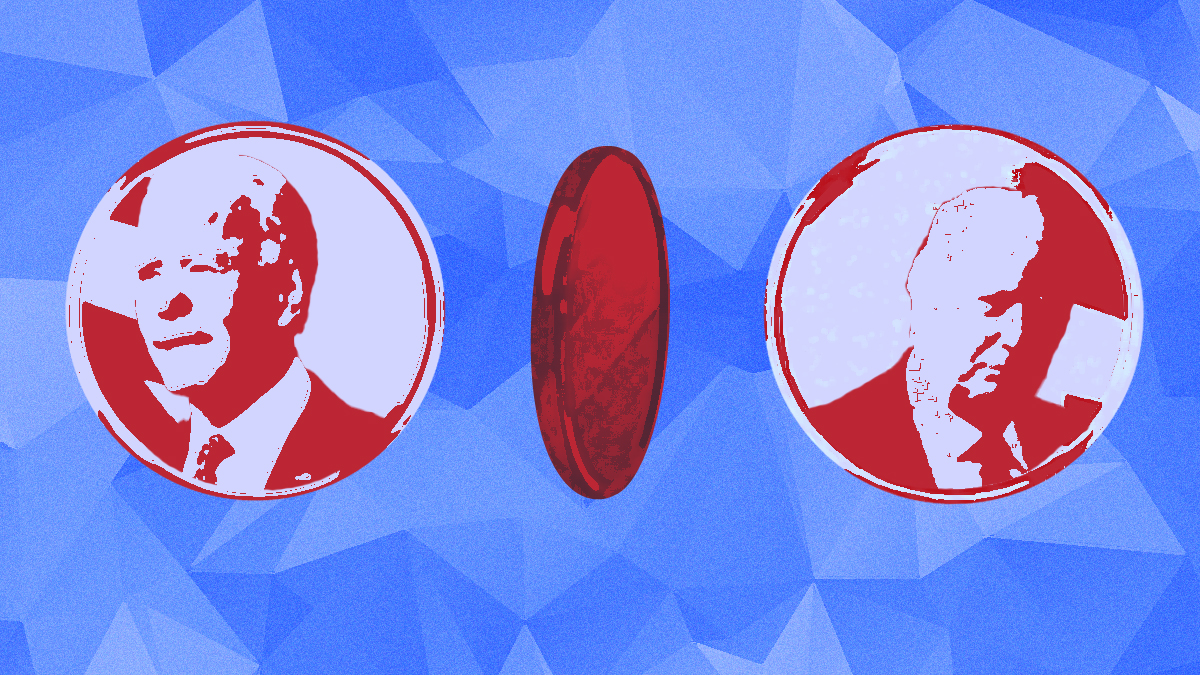 What Happened in America? An Imperial and Neoliberal Triumph

Joseph Biden and Kamala Harris have been elected President and Vice-President of the United States, although President Donald Trump has promised to challenge these results in court. To many observers, this outcome is not surprising.

There are, however, two important caveats to the results. The first being that Joe Biden, like Hillary Clinton before him, massively underperformed in both the polls and general expectations.

Secondly, a serious political realignment appears to have been finalized. Non-white voters and women supported Trump by larger margins than in 2016, with him only seeing losses amongst white suburbanites.

This was no coincidence, but rather, a consequence of the Democrats’, and Joe Biden’s, choices. Joe Biden himself is deeply aligned with the American right generally, and the Republican Party specifically.

His political career, which extends nearly half a century, saw Joe Biden ally with segregationists attempting to prevent school integration, push for cuts to social services, pass a disastrous and racist “anti-crime” bill, lead the charge for the the Bushs’ (father and son) wars against Iraq, and build the draconian immigrant “detention centers” he now uses as a cudgel against Trump.

In short, one wing of the American right has triumphed over the other. As Julius Nyerere, anti-colonialist and first President of Tanzania, rightly observed, “The United States is also a one-party state, but with typical American extravagance, they have two of them.”

Obama’s coalition was lauded for its diversity and youth, including voters that crossed racial, economic, and religious lines.

One of the more impressive elements of this coalition was the unity of Northern, largely white, voters in the rust belt, and record numbers of black voters. It would seem that the new Biden coalition, dominated by Iraq War hawks and Silicon Valley capital, has proven less effective.

This Biden coalition has two central appendages: the advisors, consultants, and campaign officials who made the case for the coalition, and the voting block which ultimately carried it to (seeming) victory.

The Lincoln Project (TLP), a political action committee led by a strong contingent of former Bush officials and boosters of the Iraq War (although, judging by Tuesday’s “results” not a popular contingent), was crucial to the Biden Campaign.

Although their primary focus was critiquing Trump, the group endorsed and supported Biden. Even conservative columnist Max Boot noted their efficacy. Boot believes that TLP will create, “a sane and sober center-right party in America.”

Although Boot is longing for a “sane and sober” Republican Party, TLP’s rhetoric has found a home among the Democrats, not Trump’s own party. The “sane and sober center-right party in America” that the Lincoln Project is molding will be dug out of the hollowed carcass of the Democrats.

The Project is not solely dedicated to removing Trump, and has backed Democrats in various races. Rick Wilson, a Republican political strategist and former apparatchik for Dick Cheney’s Defense Department, is one of the founders of TLP and its main spokesman.

Wilson appeared on Democratic strongholds MSNBC and The Daily Show to great acclaim, indicative of the warm welcome he’s found generally with Democrats.

What does TLP intend to do with its influence? One need look no further than the advertisements they have produced.

In an ad called Betrayed, a former Navy SEAL declared that ”any commander-in-chief with a spine would be stomping the living shit out of some Russians right now.”

One of TLP’s primary functions appears to be to push American militarism. The group’s other ads carry the same tone, with one alleging that Trump is in league with Russian communists, one boosting the war in Afghanistan, and yet another encouraging aggression against the Chinese government based on the neo-con memoir of disgraced National Security Adviser John Bolton.

Not only is TLP doing its part to further the Democrats’ Cold War mindset, its founders are getting rich in the process. This is of course a feature, not a bug, of the Lincoln Project’s operations.

In an impressive feat even for the grift-mill that is the “political action committee,” TLP manages to funnel over 90 percent of the money it takes in directly to groups and businesses affiliated with the group’s own founders.

While the Lincoln Project’s money was largely being recycled into its founders’ coffers, the Biden Campaign was not without deep-pocketed allies. The most important of these allies is Silicon Valley. 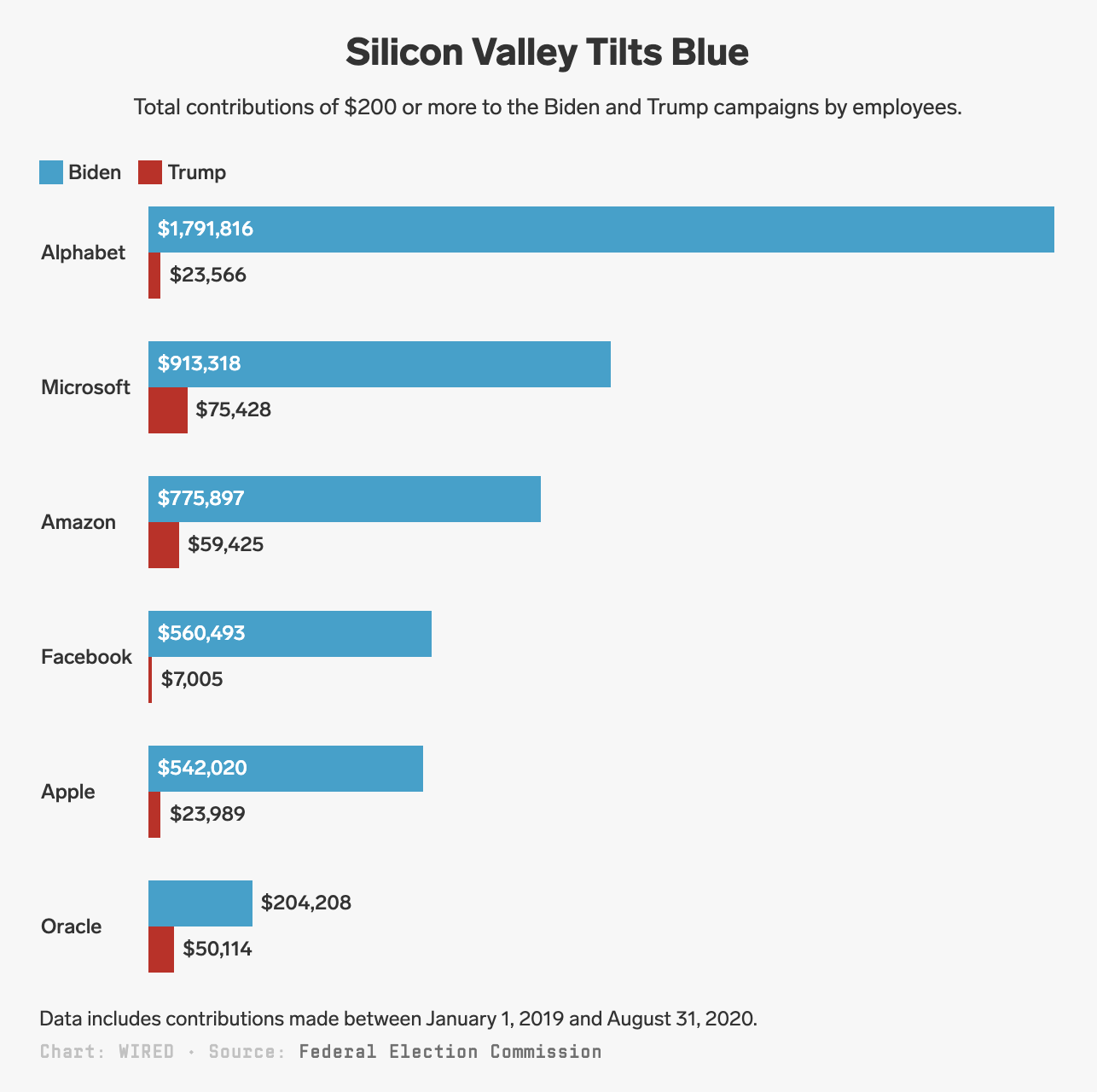 A Wired analysis found, “that employees at Alphabet, Amazon, Apple, Facebook, Microsoft, and Oracle have contributed nearly 20 times as much money to Biden as to Trump since the beginning of 2019.”

This chart, from the Wired analysis, reveals just how stark the difference is between tech contributions to Biden and to Trump:

Tech giants in the valley were satisfied with their results, as CEO of Amazon, the COO of Facebook, and the founder of Microsoft, all expressed their pleasure. They certainly had reason to.

The Biden-Harris administration will likely be far more friendly to (read: will reduce regulations on) the tech sector. Why, after all, would Vice President Kamala Harris turn on her partners in the tech sector?

The campaign manager for her district attorney race now runs policy for Google in California, her brother-in-law is the general counsel of Uber, and Harris even helped Facebook COO Sheryl Sandberg market her book, the magnum opus of corporate feminism, Lean In: Women, Work, and the Will to Lead.

While TLP’s money-laundering operation may have served to push the Democrats’ further to the right, it does not seem to have encouraged many Republican voters to turn their backs on their party.

The Democratic Party of Joe Biden has become the home of Silicon Valley, and the architects of the Iraq War. While the reasons for the party to swing right are largely economic, why would their base accept this realignment?

One answer is that for the party, hating Donald Trump, in and of itself, brings you into their electoral coalition. All political disagreement has been entirely flattened.

The Lincoln Project’s advertisements encapsulate these flattened politics perfectly. They commit to being staunchly anti-Trump, while containing little political or ideological content. What little content there is tends to be interventionist and right-wing. Trump’s polarizing personality has allowed a remarkable infiltration of the Democratic Party.

Did you try to run for governor of a Republican state, with a moderate record on domestic politics and worse one on foreign matters? It’s irrelevant if you helped get the vote out against Trump (Stacey Abrams). Do you support the Saudi-American war against Yemen, and oppose the Green New Deal? It’s irrelevant if you also say you oppose the President (Doug Jones). Are you an anti-abortion former CIA agent who wants to invade Syria (Evan McMullin)? Welcome to the #Resistance.

Google Stacey Abrams and the results largely describe the “New Georgia” she has created, or laud her for Democratic gains in the state. What they, almost uniformly, never discuss, is her actual record.

Her record is complicated, and consists, in large part, of her working with Georgia Republicans as a “collaborator” (her words) and making cuts to the public school system.

Although the Democrats are nearly uniformly terrible on the question of Palestine, Stacey Abrams stands out from the pack. She explained her opposition to the BDS (boycott, divestment, and sanctions) movement, going so far as to call it anti-Semitic, in a Medium post:

Doug Jones and Evan McMullin are even worse than Abrams. Jones, the now-defeated Democratic senator from Alabama, is even allegedly being considered as Biden’s Attorney-General.

He is being considered despite his opposition to Sen. Bernie Sanders’ resolution to end US support for the Saudi war against Yemen.

McMullin who, again, is an anti-abortion war hawk, was also a Republican until 2016. He challenged Trump for the state of Utah, but was crushed utterly in the election.

Despite, or perhaps because of, his extensive conservative credentials, McMullin was highlighted as a “leader of the resistance” to Trump by Rolling Stone. How far they have fallen. At least Barack Obama had the dignity to pretend to want to close the torture center in Guantanamo Bay. New resistance figures like McMullin openly support Guantanamo’s abuses.

In the Rolling Stone feature, McMullin goes on to say that, “Trump will blur the line between the right and left.” Although McMullin’s star power may have faded over time, his prediction that this line would blur has come to pass. Nowhere is this clearer than in the field of foreign policy.

The Lincoln Project and Evan McMullin are not alone in renewing the American Dream of empire, which seems to have slumped during the Trump era. Trump and his administration’s lack of focus and sheer incompetence meant that his attempted coup in Venezuela was swiftly defeated, and the empire’s victory in Bolivia was short-lived with Evo Morales’s socialist party recently returning to power.

Trump has weakened American imperial hegemony in NATO, and even fired his Defense Secretary, Mark Esper, for opposing Trump’s attempt to withdraw American troops from Afghanistan.

The imperial order has therefore thrown its weight behind Joe Biden and Kamala Harris. Biden and Harris have the full support of the American national security state.

The full list even includes former Secretary of State Madeleine Albright (a lynchpin of the first Iraq War) and Bush’s Deputy Homeland Security Advisor Steve Abbot. Even 130 national security officials who served under Republican administrations have lined up behind Biden.

Stacey Abrams summarized the feelings of many Democrats in a conversation with the Council on Foreign Relations, “I may have disagreed with George Bush and George H.W. Bush and Clinton and Obama on things, but I never disagreed fundamentally with the position the United States held in the international order.”

The two parties have far more in common than their proponents would have us believe. The pro-war lobby has already claimed Biden’s transition team. More than a third of Biden’s agency review team for the Department of Defense list their “most recent employment” as weapons industry organizations, or organizations funded by the arms trade.

The Democratic Party, although always a faithful servant of capital and war, has truly capitalized on the Trump moment.

The distinctions between the Biden and Bush organizations have become ever narrower. Artificial resistance to Trump’s personage has allowed the Democrats to turn ever rightward. All of the largest political questions in America have been flattened into one: How do you feel about President Donald Trump?

The Empire is resurgent, Silicon Valley is satiated, and the “Never Trump” neo-cons have found a lovely new home amongst the Democrats. Where does this leave America’s nominally “left” party?

In the words of an excellent Jacobin article, it leaves them as “little more than a benevolent society, a make-work program for the fail-children of those Post-War professionals, who did not anticipate their inability to reproduce their class.”

Trump –although not “Trump-ism”– has been defeated but the forces that are now ascendant in both parties are just as, if not more, dangerous than the former reality show host.