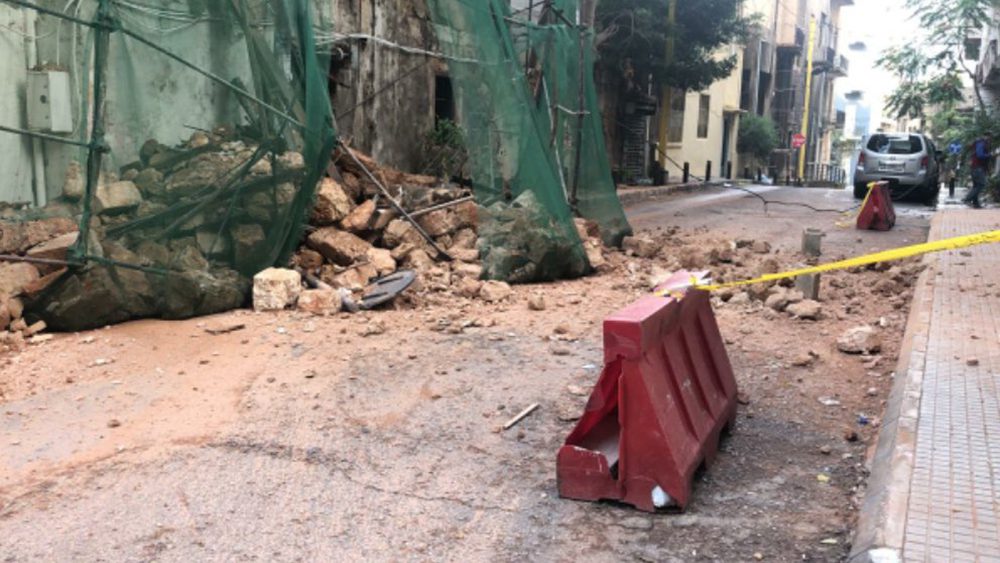 A building in Achrafieh partially collapsed on the morning of November 6 as a result of torrential rain the night before. The building, which sustained damage in the Beirut port explosion on August 4, previously housed the world-famous Hanna Mitri ice cream shop.

Another residential building collapsed in the Medawar area of Beirut two days prior due to the thunderstorm. Residents in the next door building first heard the Medwar building collapse and assumed it was another bomb, similar to the Beirut blast that decimated a fifth of the city.

No injuries were sustained from either collapse, with the Achrafieh building empty of residents.

Citizens of Beirut expressed fright and panic over the weekend at the season’s first thunderstorm, which triggered painful memories for those who lived through the port explosion.

Aside from the psychological damage of the Beirut blast, Lebanon’s infrastructure has not fully recovered three months after the explosion.

Tens of thousands of homes took damage in the blast and have not yet been repaired. The blast left 300,000 homeless and without shelter as the gripping cold of winter approaches.

Among the damaged structures are 640 historic buildings, from which 60 are at risk of collapse. Officials are expecting more incidents as the weather worsens.

The day prior to the collapse, Internal Security Forces asked citizens to stay away from badly-damaged buildings and to avoid parking near billboards during the storm.

Authorities said they will also be demolishing the explosion-damaged grain silos at the Beirut port.

Lebanon’s infrastructure has been abysmal for years

Even prior to the blast, Lebanon’s infrastructure could not withstand storms of large magnitude. Since 2015, heavy storms have caused the overflooding of roads and manholes, hindering the mobility of many.

On December 9, 2019, the streets of the suburban Ouzai neighbourhood flooded, stranding motorists and driving one resident to utilize a surfboard as means of transportation. The storm was so catastrophic, it gained the attention of international media platforms.

Since the 1990s, Lebanon’s roads have also suffered from significant traffic congestion that costs the country an estimate of $2 billion per year.

And while no recent road conditions survey exists, the Ministry of Public Works and Transport estimated back in 2000 that only 15 percent of the roads in Lebanon’s main network are in good condition. 50 percent are in fair condition and 35 percent are in poor condition.

Lebanon also has one of the highest rates of officially registered vehicles relative to the population, with Lebanese people preferring not to use the country’s unorganized and unsafe public transportation system. Added to the fact that road violations often go undocumented, these factor significantly worsen congestion and the state of our roads.

Straying away from roads, Lebanon’s electricity, garbage disposal, sewage, and water sector all have their respective crises.

Because of the economy, this winter will hit Lebanon’s population even harder

The winter season is already difficult in Lebanon, especially in Beirut, a city overcrowded and bursting at the seams. But now, citizens face life-threatening circumstances.

More than 70,000 people have lost their jobs since the explosion, many of whom can’t afford to repair their homes during the ongoing economic crisis. UN surveys suggest that 50 percent of the Lebanese population now live under the poverty line.

The season is expected to be extremely difficult for many, especially for families in badly-affected areas such as Karantina. The area overlooks the Beirut port, and hosts many of the city’s poorest citizens and migrant workers.

Those with homes and windows that remain intact have other winter expenses to consider: warm clothes, blankets, heating systems, and medicine for when they’re sick. A sharp increase in the price of goods –as well as shortages– makes many of those unattainable.

Four months earlier, citizens took to the streets to help clean and reconstruct the broken city after the blast. Current efforts for rebuilding Beirut are largely led by non-governmental organizations (NGOs) and charities.

Local and international investigations have so far failed to provide any meaningful conclusions as to whom or what caused the explosion of the 2,750 tonnes of ammonium nitrate sitting in the port for the past seven years.

However, investigative reports have demonstrated that many political leaders were aware of the presence of the deadly substance prior to the blast.