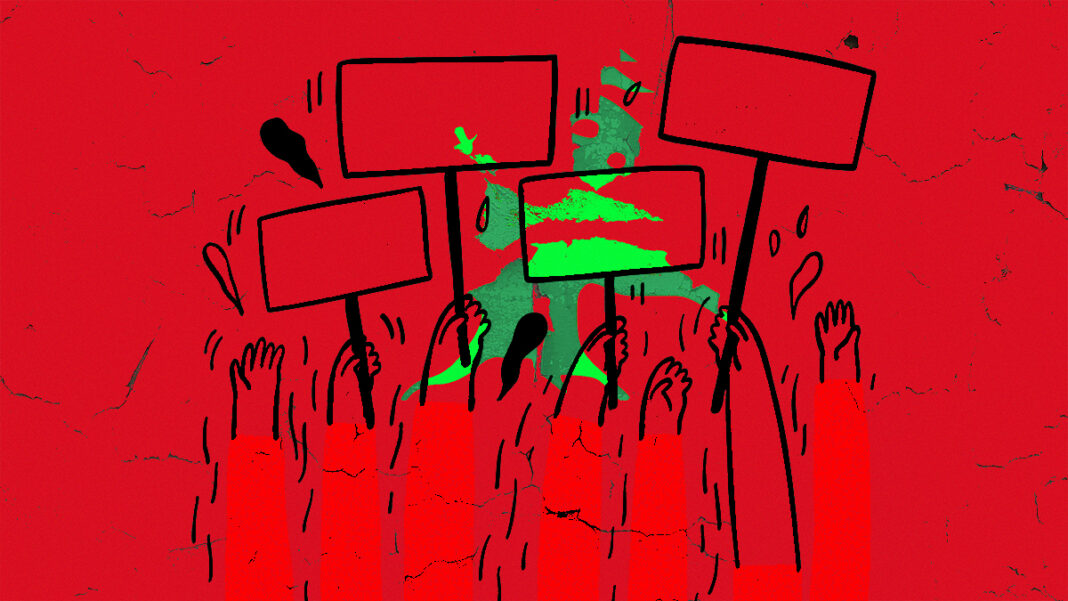 In Sunday’s plebiscite, the Chilean people voted overwhelmingly in favor of striking down the constitution from the brutally dictatorial Pinochet era and drafting a new constitution through the election of a citizen council. The referendum comes against the backdrop of major protests opposing the prevalence of socio-economic inequality and elitism that had taken place at almost the exact same time as the protests in Lebanon.

Following the eruption of the 2019 October Revolution and the rise of civic activism, one of the foremost demands of the massive movement in Lebanon and throughout the diaspora was not only the removal of the current political order and an overhaul of the institutionalized sectarian system, but also that Lebanon hold early parliamentary elections.

In the early phases of the revolution, the outcome of a representative government and the pursuit of justice seemed very plausible, especially in light of the resignation of the Prime Minister Saad Hariri.

Elections are the principle tenets of democracy, and serve to represent the interests, authority and sovereignty of peoples. In Lebanon, this has not been the case. The decks have been stacked against any adequate representation of the Lebanese people.

In order to cement their supremacy and that of their affiliates, the political establishment has used a variety of tactics and state apparatus that include but are not limited to the disproportionate electoral law, clientelism, nepotism, and the installation of a police state to subordinate the will of the Lebanese people regardless of race, class or gender.

Nonetheless, prominent members of the political elite continuously assert and justify their legitimacy and presence by referring to their victory in the 2018 elections.

In addition, French President Emmanuel Macron reiterated the same point in a press conference during his trip to Lebanon following the harrowing August 4 explosion: The Lebanese people had reelected the political establishment, irrespective of an unjust electoral law.

the population in Lebanon and throughout the diaspora is at a bottleneck or Catch-22.

He stated that in order to change the electoral law, “we must be pragmatic and work with what we have.”

In his speech, President Macron virtually reaffirmed France’s recognition of a political class whose people had essentially rejected their legitimacy and effectively denied citizens of their right to legitimate representation.

Last week, Prime Minister Hariri was reappointed much to the chagrin of the peoples in Lebanon. He promised to form a technocratic government as soon as possible, under the auspices and governance plan of President Macron.

Within the context of the aforementioned series of events, it would appear that the population in Lebanon and throughout the diaspora is at a bottleneck or Catch-22. If early elections are held, the electoral law may not only reinforce the political class’s grip on power, but will likely not lead to major change, even if a handful of “independents” are elected.

However, the alternatives of a referendum or plebiscite have scarcely been discussed. A referendum is a national direct vote on a particular proposal that could lead to the adoption and implementation of a new law or policy, such as a new electoral law.

Since its establishment, the much-anticipated 2017 Parliamentary Electoral Law has been heavily contested. While it introduced a change in the electoral voting system, the 2017 law introduced a disproportionate division of districts that widened the gap between voters-per-seat ratios.

In other words, the law enforced the gerrymandering of districts that could contribute to both inequality in representation and the reassertion of authority and legitimacy by traditional and dominant political parties in Lebanon.

Needless to say, the results of the proceeding 2018 elections illustrated the likely outcome of the electoral law. In addition to the inequity in the distribution of seats, voter suppression and intimidation and lower voter turnout than previous years also led to a landslide win for the political establishment.

Even after the 2019 mass movement’s rejection of their legitimacy, prominent political figures pointed out the “weaknesses” of the revolution and its lack of leadership, and refused to hold early elections.

Nevertheless, the fact still remains: Without a representative and proportional electoral law, early elections are not the most effective apparatus to achieve the goals of proportional representation and legitimate leadership.

The term referendum may be a familiar one that was used ubiquitously during the 2016 Brexit elections in the United Kingdom. A referendum, or plebiscite, is a national vote that includes the diaspora on changes to the constitution or in legislation and is a direct expression of democracy and the will of the people.

If implemented without undue influence, referendums have proven to be an opportunity and a vehicle for immediate action, as with the case in Chile.

It is also often used for changes to constitutions and the voting system, among many other issues, within the context of illegitimate elected officials that are unwilling to act.

A referendum could serve to “officially” delegitimize the political elite on a large scale.

The logic for the preference of changing the voting system through a direct vote is that if politicians were allowed to make the rules that govern their election, it would deter the impartiality of the government and allow for the abuse of authority to consolidate their position.

However, critics of referendums highlight the problematic aspect of hosting a direct and definitive vote to determine important issues, such that even if a vote prevailed by a margin of 50.5 percent, it would still be considered as the winning vote.

In the case of Lebanon, the October 2019 massive political protests are a clear reflection of the people in Lebanon’s vehement frustration after decades of political turmoil, deteriorating economic circumstances, exacerbated inequality and poverty, lack of decent of job creation, brain drain, and the denial of the right to dignified living conditions and the right to representation.

According to the Arab Center for Policy and Research’s annual large scale Arab Opinion Index (2019-2020), 91 percent of surveyed Lebanese citizens found the political situation in Lebanon to be either bad or very bad, and 67 percent supported the protests in Lebanon. Finally, 75 percent of respondents rated the performance of their representatives as either bad or very bad.

A referendum would not only enable the genuine expression of the will of the Lebanese people, but would also allow the movement to build on the momentum of the diaspora’s visible predominant rejection of the current political class without having to go through the technicalities and the bureaucracy of early parliamentary elections.

A referendum could serve to “officially” delegitimize the political elite on a large scale, and to potentially institute a just electoral law.

When President Macron and members of the political class declare their steadfast rhetoric of parliamentary proceedings as the only legitimate authority for political change, they reaffirm the structurally enforced subordination of any alternative to the present system and unjust political order.

The undermining of a populace’s political will is precisely the sort of malicious trope that hinders durable political and economic development.

By discrediting the mass movements in Lebanon and throughout the diaspora, and continually asserting gradual nature of change through “democratic means,” the political establishment in Lebanon and President Macron are effectively deploying the same tactics and rationale that the League of Nations used to justify the Mandate in Lebanon, Syria, Palestine and Jordan and deprive the peoples of the Levant of the right to self-determination.

Article 22 of the 1924 Covenant of the League of Nations states that “advanced nations” should be entrusted with the “tutelage” of assisting “peoples [in colonies and territories] that are not yet able to stand by themselves… there should be applied the principle that the well-being and development of such peoples form a sacred trust of civilisation.”

Meaning that the nations under Mandate were meant to progressively reach a threshold of civilisation and development to be granted independence.

Throughout history, the undermining of a populace’s political will is precisely the sort of malicious trope that not only hinders durable political and economic development, but also promotes the perpetual institutionalized consolidation of authority and oppression by colonial and neo-imperial powers, as well as undemocratic and despotic regimes.

Whether or not the current ruling class would consider a referendum is questionable. However, the viable option of a referendum should be endorsed and undertaken by President Macron and the international community if they are truly concerned about the welfare of the population in Lebanon and sustainable socio-political and economic development, but are unwilling to bypass democratic processes.

Moreover, the subject matter of the referendum does not necessarily have to address the disproportional distribution of seats in the electoral law. It could very well consider direct changes to the constitution. It could even concern the formation of an independent governmental council that is directly elected and rightfully represents the genuine will and interest of the people by drafting a new constitution.

While even the theoretical scenario of holding a referendum would appear to be another futile effort at changing the vicious political and sectarian circle in Lebanon, it could serve as the last nail in the coffin of the Lebanese political establishment’s claim to legitimacy.

This is not to say that a referendum is the wave of a magic wand that will jumpstart immediate political reform. The road to independence from national, regional and international powers and to sustainable economic development is a continuous struggle.