Lebanon’s most recent Parliamentary elections, the first to be held after more than 9 years, brought about very little changes in the country’s overall political scenery. Results have just been released, yet I try in the below to summarize some main facts and observations about these elections (since I was closely involved in one of the independent formations running for office), in the hope that a more detailed (and much needed) analysis will follow through.

1. Voter turnout was almost the same as the last elections, with drops in several areas: Voters were obviously not excited to participate in the elections. It seems that the mobilization of the ruling parties works in many areas, but this does not exceed a 50% rate. Too many factors for this average turnout could be in place: Voters don’t vote where they reside, many could have left the country, and many could have been discouraged by seeing the same parties run again, with no clear and powerful political alternative in place. It is also striking that many districts where independent or “civil society” lists were present voter turnout actually decreased compared to 2009 rather than increase. Independent groups need to have a reflection on this and other related trends. 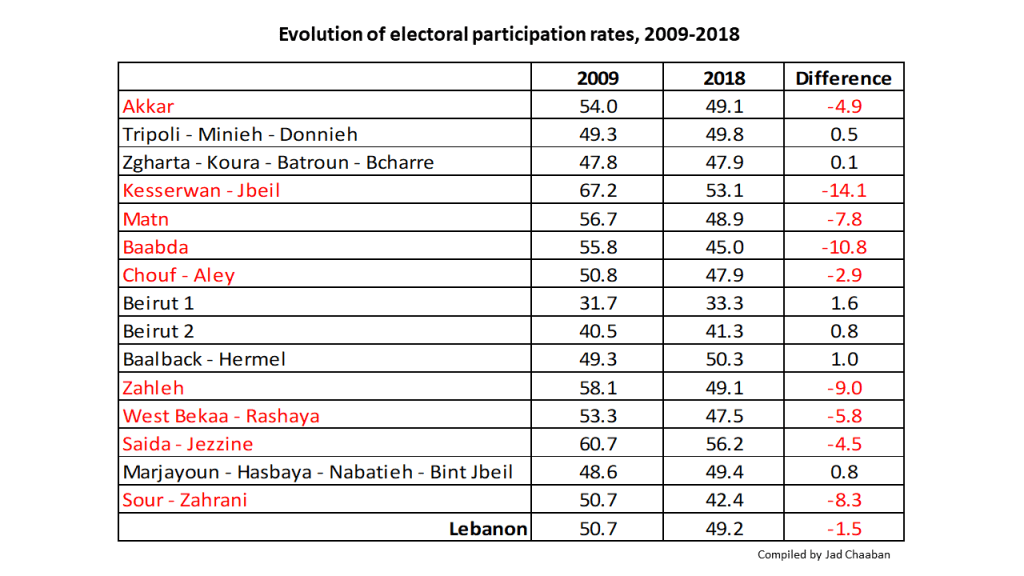 2. Ruling cartel confirmed its grip on power: The ruling political parties have seen their seats increase, with the exception of Hariri and Jumblatt’s lists who have suffered a minor setback, with no real implications on their respective political weights. The regeneration of more or less the same distribution of power is the natural result of an electoral law that was drafted by incumbents who made sure all the details in the process would allow them to come back, or at least suffer very minor losses. Remember that it took years for them to approve a new electoral law, and they only approved it collectively once they all made sure they will be re-elected!
This situation is not to the disliking of the so-called “International Community”, which prefers to see a sectarian corrupt cartel maintaining “stability” in the country as compared to the chaos in surrounding countries.

3. Political money and massive intimidation and pressures were used: This was also expected, as it would be stupid to assume that the groups in power would not use their ministries, the public money and the political power to pressure voters and buy off loyalties. But the scale of it was massive. Voters were given massive cash donations just prior to elections (the vote ranging from 200-1000$), people were promised jobs in public entities (especially armed forces), public medical disbursements skyrocketed, etc. Citizens were also threatened (even in polling stations during the vote), pressured in their jobs, their families, their villages, especially in areas dominated by major political parties (Hezbollah and Amal in the South and the Bekaa, PSP in the Mountain, etc.).

4. The media played a major role in blocking independent voters: The new law did not make sure that candidates have equal access to billboards, TVs, radios, and other media, regardless of funding. The media companies in the country made sure to profit from this loophole, in a very greedy and opportunistic way. All TV and radio companies (all private, barely anyone is reached by the public television or radio) agreed to charge the same rates for political talk shows and TV political ads, with an average radio show costing 2,000$/episode and a TV appearance 15,000$/show!! Billboard rentals ranged between 1000-5000$ per billboard, and online news portals charged 500-2000$ per tailored news package! For the average candidate to get proper exposure, it would have cost him/her a minimum of 30,000$, which is beyond the reach of most candidates. This situation, which was made entirely legal by the new law, had the effect of favoring only rich or politically connected candidates to be exposed to voters.

5. Breakthroughs only came from the most organized and the better funded groups: A quick look at the winners from outside the parties in power shows that they all come from either: a) Very rich backgrounds with a large service network (Mikati, Makhzoumi, Mrad) and b) Organized parties with a strong partisan and/or sectarian ideology (Ahbash, Nasserite). One independent (Paula Yakoubian, famous TV anchor) representing the new party Sabaa won a seat, although until 1 month before elections she was employed by Hariri’s Future Television and was close to his party.

6. Independent lists suffered major losses in almost all districts: Many independent or so-called “civil society” lists had high expectations that the new proportional law could help them get some seats. Although some forecasts gave independents about 10-15 seats nationwide, only Paula Yakoubian managed to get through, with her campaign spending massively and benefiting from good TV exposure.
Independent lists have failed to incorporate two key features of the new law which would have been required to succeed: a) Strong candidates with an established on-ground network in the districts and/or a recognizable public image and presence there; b) Strong and differentiated political discourse that engages the voters and incites them to participate, especially the new voters. It is obvious that independent lists have missed one or both ingredients, and while the first could be attributed to the complexities of the new law and the need to form lists in a record time in complex districts, the second is entirely the responsibility of the new campaigns. Most of them ended up with platforms promising conventional broad reforms, and not able to showcase a credible political alternative to the status-quo. The hype most of these independent groups created around elections and the “promise for change” inflated into a bubble that burst on elections day.