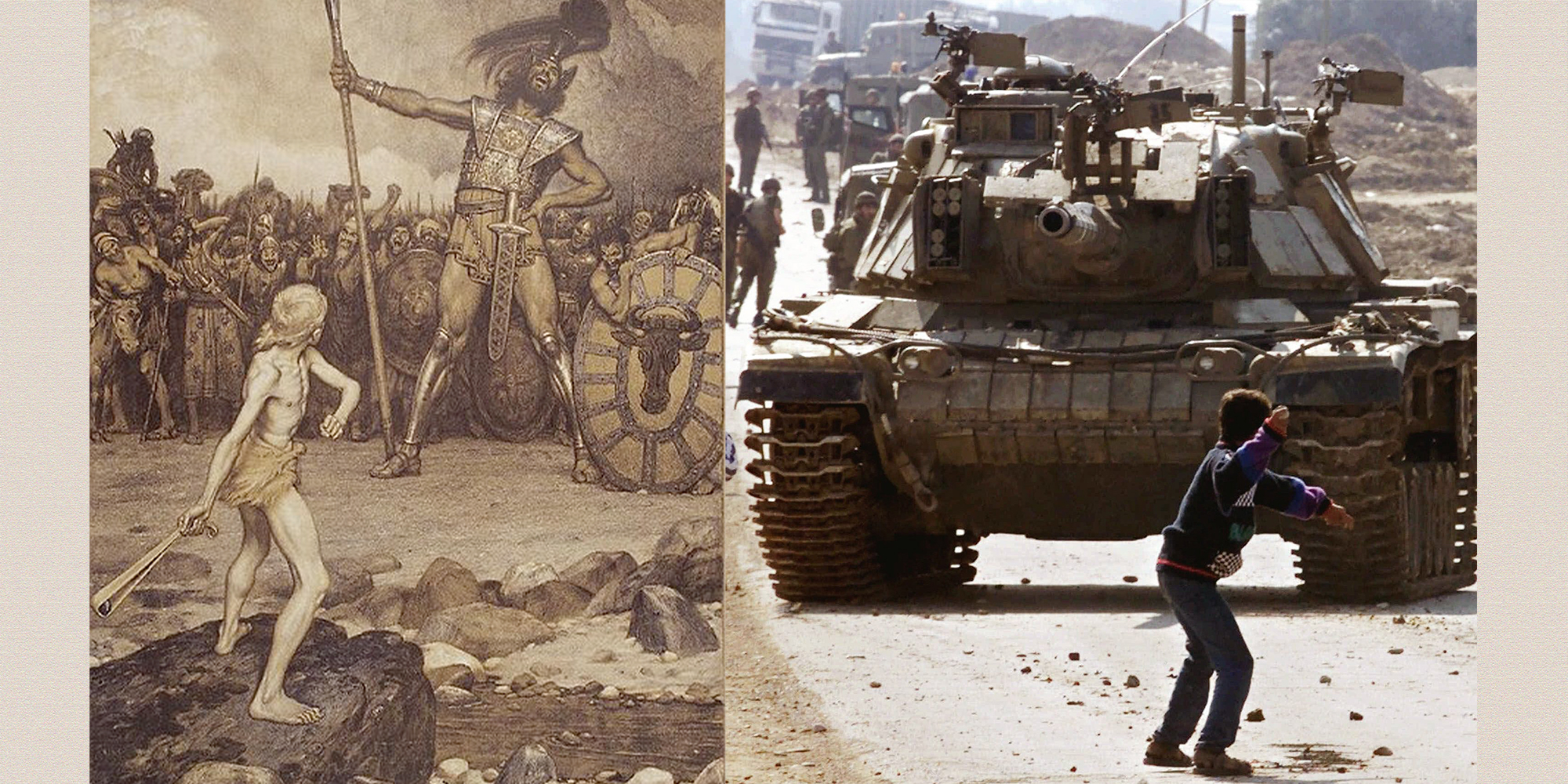 On the left is Osmar Schindler’s 1888 painting “David and Goliath.” On the right is 15-year-old Faris Odeh throwing a rock at an Israeli tank during the Second Intifada. He was killed by the Israelis ten days after this picture was taken.
Home
Politics
Lebanon

Making Goliath into David: Israeli Aggression in Lebanon and Palestine

Following the August 4 explosion at the Beirut port, the Israelis lit up their city hall in Tel Aviv with the colors of the Lebanese flag. In the early hours of August 26, they lit up the skies over south Lebanon with flares, white phosphorus bombs, and artillery shells –all confirmed by villagers in the south.

It is still not entirely clear exactly what sparked the conflict, as both sides appear to maintain the other fired the first shots, but it seems Israel, at a minimum, used chemical weapons once again.

Why, then, did the Washington Post, New York Times, and Reuters, all run headlines saying merely that Israel had reported a “security incident?” They also could have potentially mentioned the events leading up this issue.

Al-Manar, a Hezbollah affiliated media group, for example, immediately made the connection that if there indeed was a Hezbollah attack, as the Israelis claim, it would have been retaliatory for an earlier Israeli raid which killed a Hezbollah fighter. Additionally, only a few days before this clash, an Israeli drone was shot down over Lebanese air space.

While it is technically accurate to say that Israel is reporting a security incident, one would think that one of these prestigious news organizations might have led with the fact that a country, one backed by the United States and Europe, used chemical weapons against one of its neighbors. A similar dynamic played out almost two months ago, and the media response was just as predictable.

An Earlier Dispute at the Border

On July 27, something else happened on the border between Lebanon and Occupied Palestine, though it seems nobody is sure quite what it was.  Many media outlets have fallen back on describing this conflict as an ‘incident’ or a ‘flare up’ between the Israeli Army and Hezbollah.

Whether it was an aggressive operation by Hezbollah which Israel intercepted or Israel overreacting to nothing on the basis of fear, as respectively claimed by the Israeli Army and a statement from Hezbollah, will perhaps never be clear.

What is clear, however, is that these are not isolated incidents. While the July incident made its way to the Western press, including the New York Times and The Washington Post, it again does so in a strange context.

The Times and the Post ran nearly identical headlines, NYT going with “Israel Says it Thwarted a Hezbollah Raid at Lebanon Border” and WP with “Israeli says it repelled incursion from Lebanon; Hezbollah Denies Launching Attack.”

Both headlines again lead with Israel’s claim, and make only casual reference to a prior Israeli air strike which killed a Hezbollah fighter (this earlier aggression, of course, not meriting its own article in most cases). Still, they mention only the killing of a Hezbollah fighter in an airstrike in Syria.

Why, for example, does it not reach wider media that Israeli planes violated Lebanese air space 29 times in the 48 hours leading up to Monday’s “clash”? Is it not also relevant that again, only days before the border dispute, an Israeli drone violated Lebanese airspace, crashing to the ground in Beirut?

One of the most brutal instances of this media failure was CNN’s coverage. Following last week’s activity at the border, Israeli tanks fired at a village in South Lebanon. That is not, however, how the IDF and CNN interpreted it.

This is not the first time Israel’s aggression has been justified as “defensive.” In each conflict between Israel and its enemies, the narrative usually begins at a particular point, the point at which Israel is “attacked.” One of the more recent and more prominent examples is the 2006 Israeli invasion of Lebanon.

Goliath and David: The 2006 Israeli Invasion of Lebanon.

In 2006 the Israelis invaded Lebanon in relation to Hezbollah kidnapping several of their soldiers, so the story goes. Again, however, we come to the same question: Why does this conflict start on July 12 with a small Hezbollah incursion into Israel?

Much like in this recent dispute, Israel had spent the months and years leading up to the war assassinating its political opponents. The clock always appears to start when Israel is attacked, regardless of whatever provocation preceded it.

Shockingly, it also appears that Israeli and American intelligence were preparing for a military offensive against South Lebanon long before the Israeli soldiers were even taken. While the media has certainly failed in properly describing the origins of these conflicts, it is equally faulty in how it characterizes the wars themselves.

Defenders of Israel often invoke the biblical story of David and Goliath as an analogy for the country’s conflict both with its Arab neighbors, and the Palestinians.

In the biblical narrative, a young David (who would later be king of Israel) defeats a massive opponent, Goliath, in single combat by using a slingshot and a stone. The story is the classic archetype of the “underdog” story.

In the analogy, Israel is of course David, surrounded and outnumbered by their numerous enemies, the powerful Arab Goliath. Israeli Prime Minister Benjamin Netanyahu even went as far as to name one of Israel’s missile defense systems “David’s Sling,” proclaiming at its inauguration: “Whoever threatens our existence—places himself in existential danger.”

Israel’s existence is always threatened, under siege. In 2006, Hezbollah represented the Goliath to their David. However, in their prosecution of the war, it is clear that Israel is the Goliath, threatening the existence of the Lebanese.

General Gadi Eizenkot, commander of the Northern Front of the IDF, developed the so-called “Dahya Doctrine” during the war. Named after the southern suburbs of Beirut, which are largely supportive of Hezbollah and its Secretary General Hassan Nasrallah, the doctrine legitimized targeting civilian infrastructure and even the people of Lebanon themselves.

In the words of the general, what happened in Dahye –widespread carpet bombing and war crimes–  will “happen in every village from which shots were fired in the direction of Israel.”

The Israeli Army openly admitted their desire to crush the civilian population. How, in any understanding of their favorite biblical myth, could they possibly not be Goliath? Even Hezbollah, long designated as a “Terrorist Organization” by the United States and its proxies, publicly claimed it made efforts to avoid targeting civilians.

Even outside the context of their conflicts with Lebanon, the same pattern of Israel portraying itself as beset on all sides by powerful adversaries is quite clear. In fact, this dynamic has existed since the very founding of Israel in 1948.

During the 1948 War and ethnic cleansing undertaken by the Zionists, they referred to their homemade mortar as the “Davidka” or “Little David.”

Again, they invoked the idea of Israel as the small David, facing down the Arab Goliath in 1948.  Not only was the mortar named after this myth, but they went as far as to dedicate a square to their weaponry following the war’s conclusion, complete with a model of the weapon.

So, does the history of the 1948 War, or al Nakba, bare out the identity of a Defensive David? While in Israel and the United States this war is often remembered for the Arab states invading Israel, “determined to wipe it off the map,” nothing could be further from the truth.

In fact, the armies of the Arab states only entered into areas which the United Nations had allotted for a Palestinian state. Still, many of these areas (such as the Palestinian cities of Acre and Nazareth) would ultimately fall to invading Zionist forces, again belying the idea of Israel defending itself.

The maps below, of the partition prior to the war and the post-war armistice line, reveals the extent to which the Zionists encroached on Palestinian land. And thus, the cycle repeats itself.

Even the 1967 War, again remembered as Israel defending itself, was pure aggression. In less than six hours, the Israeli Air Force struck targets in Egypt, Syria, and Jordan, and wiped out their enemies. This attack was not “preempting” any imminent Arab invasion, as US and British intelligence now reveals. It was merely another case of Israel portraying itself as a victim, and conquering vast swaths of territory –the entire West Bank, Gaza, and the Golan Heights–  in the process.

Former Israeli Prime Minister Golda Meir once gave US President Richard Nixon an ominous warning. She told Nixon that, in the event the US needed to send troops to assist Israel, “by the time you get here, we won’t be here.”

Israel is always in danger as, essentially, a marketing ploy. How else can one justify the massive amounts of military aid flowing from the US to the Israeli Army? Until today, the US has supplied Israel with more than 140 billion dollars.

All this money is flowing in despite the fact that in 1948, at the dawn of the country, Israel already vastly outstripped its neighbors in terms of military might:

Today, Israel’s military budget dwarfs that of its Arab neighbors –with the exception of Saudi Arabia, which is a close US ally also receiving US funding, and therefore not a threat to the country.

One cannot justify an everlasting state of war, and everlasting welfare funds from the United States, without an equally enduring threat. Despite perfectly encapsulating Goliath, Israel must present itself as David in order to garner international support and US funding. Western media appears ready to aid them in this endeavor.