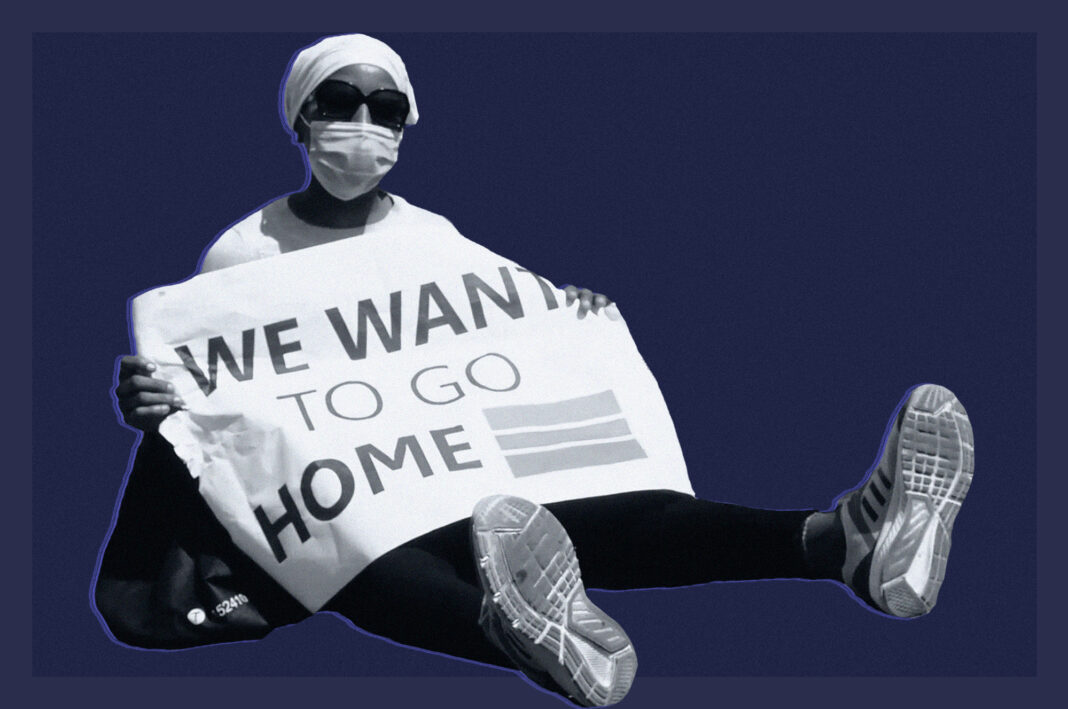 Lebanon’s Minister of Labour recently announced the new Standard Unified Contract for migrant domestic workers. The contract, developed by a Lebanese Steering Committee in cooperation with the Office of High Commission for Human Rights (OHCHR) and the International Labour Organization (ILO), is now set in place to protect the human rights of migrant domestic workers.

Migrant workers have long suffered human rights violations under Lebanon’s Kafala system, which leaves them vulnerable to abuse by tying the residency of domestic workers to the sponsorship of a Lebanese citizen.

Activist groups have used the term “modern slavery” to describe the type of contract that binds foreign workers in Lebanon and grants their sponsors full authority and power over them.

Lamia Yammine, the minister of Labour, went as far as to say that the new contract “abolishes the sponsorship system and enshrines the rights of migrant domestic workers.”

While the unified contract is a stepping stone towards granting migrant workers decent working and living conditions, it does not abolish the Kafala system. The legal residency of migrant workers remains tied to sponsors.

The decrement of such a contract is deemed as solely performative, as per a statement by the Anti-Racism Movement (ARM).

According to the statement, the ministry has, since 2019, “merely suggested basic reforms and has not addressed the root of the issue at hand: the full power granted to the sponsor over the domestic worker, which is guaranteed and reinforced by the Kafala.”

As per the Anti-Racism Movement’s statement, the contract “acknowledges the most basic of human and labour rights.” The most significant amendments include:

At the moment, there is no enforcement mechanism in place for the contract –giving employers the ability to breach the contract without any consequences or accountability.

The contract also outlines a responsibility for the ministry to intervene and retrieve a worker’s unpaid wage and cost of plane ticket home from the employer, should they receive a complaint.

However, ARM states that the ministry has so far been unable to effectively perform its duty towards migrant workers. Since the end of 2020, ARM has documented around 65 cases of contract violations.

The contract is deemed worthless if it is not accompanied by added measures to abolish the Kafala system fully, as the system is constructed of a web of laws and policies enabling exploitation and modern-day slavery.

Lebanon is currently facing the worst economic and financial crisis in its history, leaving the local lira in freefall when pegged against the dollar. Migrant domestic workers are traditionally paid in dollars to send the money back home to their families.

With the ongoing rise of the crisis, employers have been unable to pay workers their due wages. Instead of terminating their contracts and sending them back home, many employers have abandoned workers in front of their respective embassies and consulates.

Ehtiopian, Ghanian, Kenyan and Gambian workers are only some of workers who have taken to protesting their right to repatriation. Their primary obstacles involve their employers refusing to pay wages and plane tickets, withholding passports, and the embassies’ lack of cooperation and aid.

With the help of humanitarian organizations, such as Egna Legna and This is Lebanon, some of the workers were successfully repatriated.

Thirty-eight Gambian women and children have been repatriated to their homeland of the Republic of the Gambia from Lebanon on September 4.

The women took to protesting in front of the Gambian consulate earlier this month on August 20, after the Honorary Consul General of The Republic of The Gambia, Khalid Hammoud, had been unresponsive to their requests for repatriation.

“We want to go home, and we are ready,” one of the women told Beirut Today.

For more than nine months, these women were unable to leave Lebanon after their employers had refused to give them their passports back. The confiscation of migrant workers’ passports is a common, but illegal, practice in the country.

Many are said to have fled abusive workplace environments, rendering them jobless and penniless.

Watch also: Migrant workers protest in front of the Consulate of Gambia in Beirut

According to these women, the Gambian consul was unsupportive and left them to fend for themselves. Some told Beirut Today that they spent months surviving on mostly bread and water, as they had no stable source of income and no means to leave the country.

“We have been surviving on bread for months. Only khobez,” said one migrant domestic worker.

The Gambian women, desperate for repatriation, reached out to Swedish activist Lovette Jallow requesting that she help facilitate communications between them and the Gambian Ministry of Foreign Affairs. Jallow then helped the women mobilize and organize the August 20 protest facing the consulate.

During the protest, a consulate employee arrived to inform the women that he was working on “laissez-passer” travel documents that will allow them to leave the country. The employee neglected to comment further, citing that the documents were with General Security, who had taken over the repatriation process.

This action once again, expressed a lack of empathy for the women’s cases, leaving them no option but to seek Jallow’s aid.

Jallow followed through with their case closely under her organization, Action for Humanity, known for its humanitarian work in Libya since its inception in 2017.

On September 4, Jallow confirmed that the plane had safely left Lebanon with 38 Gambian women and two children. In a conversation with Beirut Today, Jallow said that two more women are expecting repatriation in the coming week.

Upon arrival in Gambia, Action for Humanity has pledged to provide social, economic and financial support to these women in addition to counselling services, as stated in an Instagram post.

“We have also hired a lawyer to look after their rights and interests and to ensure justice for them for the abuse meted out to them in Lebanon,” reads the post.