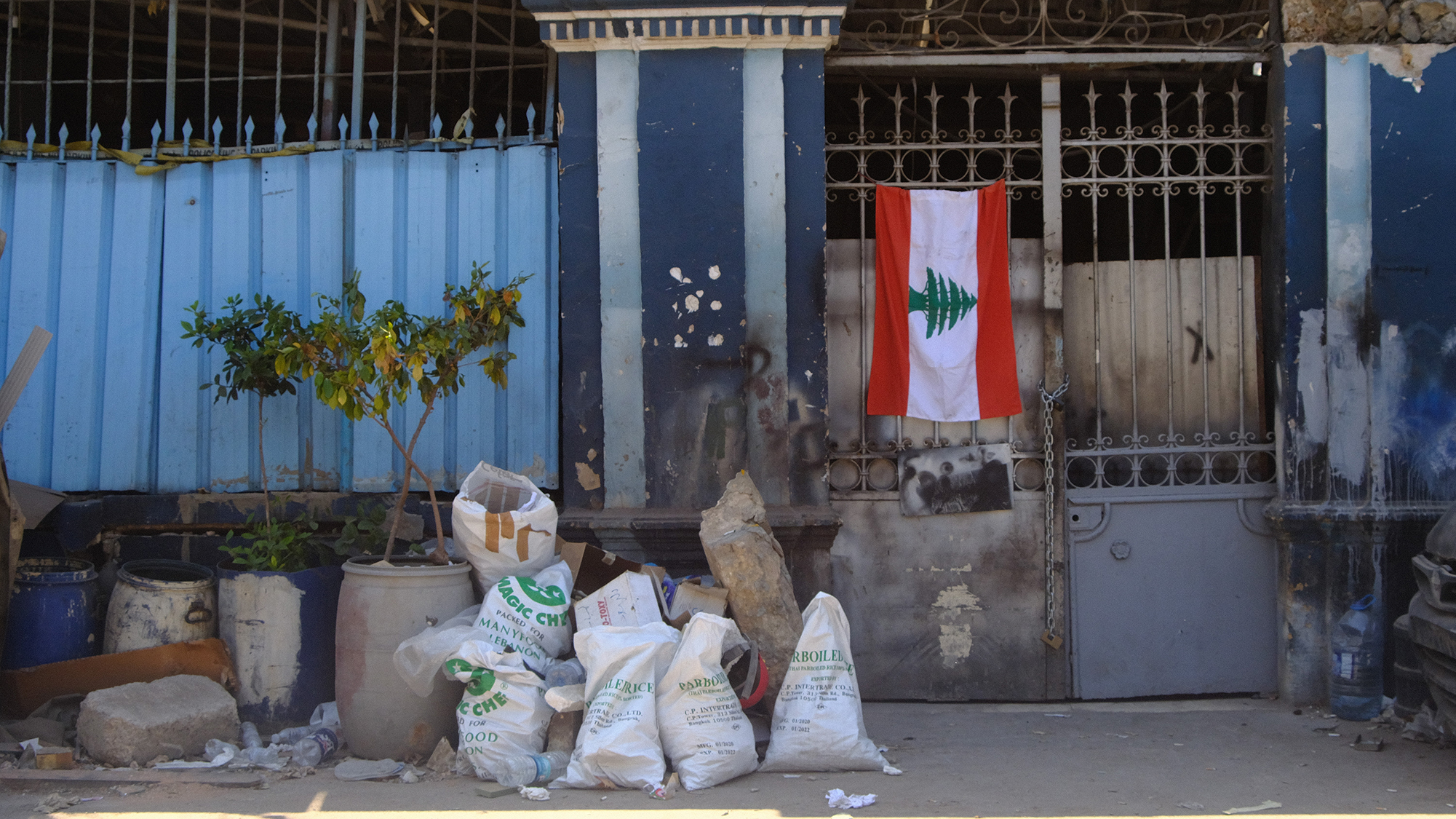 On its centenary: Lebanon celebrates a nation in shambles

On the eve of Lebanon’s centenary, French president Macron paid the country a second visit in less than a month where he had gone to great lengths to speak of a reality that many Lebanese cannot get themselves to accept or reconcile with.

What many Lebanese failed to see was touched upon by the president of the French republic at a time where France seems eager to reinvigorate its historic role in Lebanon as its political patronage but also as the founder of the state of Greater Lebanon a hundred years ago.

Macron’s visit marks the centenary of the birth of the Republic as we know it and yet the public is still unable to envision the common denominators for the Lebanon that they’ve long dreamed of and fought for.

Lebanon celebrates its birth in the wake of the port explosion, a site that also marked its birth a 100 years ago and its death 100 years later –awaiting its rebirth.

The Lebanese are divided more than ever between two competing and often contradictory agendas for their Lebanon. It is a vision that encapsulates all that is liberal and yet it also incorporates the elements for all that is disruptive and destructive. Lebanon’s beating heart is naturally inclined towards the symbolism of liberté, egalité, fraternité.

However and along the way, Lebanon gets entangled in regional rivalries between the East and the West –Iranian regional ambitions alongside China and Russia’s expansionism in the region versus their Western counterpart competing for the same resources.

What the French president said was the utter reality and an unpopular truth –a truth that many are intended on ignoring, which is that Hezbollah represents an undeniably substantive proportion of the public.

As the other half of the republic engages in a symbolic warfare of words and statements against their other half, they fail to practice what they preach. While they call for the respect of democratic values, such as the ones enshrined in Western democracies, they inadvertently silence the winning majority by disregarding them in a show of disrespect for the democratic process that brought their opposing counterparts to power.

Voices calling for the downfall of the regime and the sidelining of the political establishment are the same ones that call for the enforcement of mechanisms that safeguard the democratic institutions and the protection of civil and political liberties.

Yet, they refuse to respect the democratic process they are so keen on when it brings their political and ideological opponents to power. As the Lebanese slip through these ideological blindspots, the gap between what they aspire for and how they set out to achieve it becomes untenable. It doesn’t take a genius to figure out that the public are split amongst themselves between two ideologies of how they envision their republic.

Despite having two different projects in aim and scope, Hezbollah –being the most powerful force politically and militarily– is a force to be reckoned with. At least half of the Lebanese consider Hezbollah as a proxy that carries out an Iranian agenda that does not resemble their Lebanon and some go as far as to designate it as a terrorist group.

What was significant during Macron’s visit is the way in which he regarded Hezbollah. He referred to the group in a much more toned-down manner compared with how the other half of the Lebanese would characterize Hezbollah.

President Macron gave them recognition at a time when the group is being attacked on a national front but also by the Arab entourage for its clandestine operations and alleged terrorist activities in the region and beyond. Hezbollah’s political opponents of the Lebanese fabric have been more fierce in their characterization of Hezbollah than its most ardent opponents. Therein lies the irony.

Macron gave Hezbollah legitimacy as a parliamentary bloc and a party that is representative of a sizable portion of the Lebanese that voted them into power. Hezbollah’s representation and power are realized by its staunchest opponents on the global stage who represent everything that is antithetical to them.

This was evident through Marcon’s statements on the need to respect the will of the people that brought Hezbollah to power where they control alongside their allies almost half of the parliament and whose cross-sectarian coalitions have gained them political foothold backed by institutional, cultural and popular support.

The inability of the Lebanese to see past their differences at a time when the West, a power that the more liberal groups associate themselves with, has already established this reality is quite alarming.

The irony of having a Western power that has forever stood up against Iran and its proxies in the Middle East has finally come to the conclusion that the use of force is not a winning tactic and that pragmatism is the only route towards realizing any substantial breakthrough and thus any potential change.

This is the reality that the Lebanese in opposition to the Iranian proxies in Lebanon need to reckon with. Political factions in Lebanon that stand against Hezbollah have shared seats in parliaments while they also form national unity governments alongside them.

Their political opponents call them out while being complicit by partnering up with what they designate as being a force of evil, once through bizarre election coalitions in return for a few extra parliamentary seats and another by dividing up the cabinet seats amongst each other in a  flawed practice of consociational democracy.

On the eve of the centenary of Lebanon, it is striking to see the insistence of some Lebanese, in the midst of a weakened state and dissolved institutions, to stand up against foreign interventions even in the face of what has forever been a symbol of their salvation –the French colonialist/Godfather.

Many signs were raised as Macron went to honor the Lebanese singer and cultural icon- Lebanon’s symbol of national unity Fairouz. We heard protestors shouting out in French saying “Lebanon shall always be free” sending a clear message to the French president that the Lebanese are fed up with foreign interventions –not least one with a Western mantle.

It also shows an unprecedented level of awareness amongst the Lebanese public where, if history can teach them anything 100 years since the birth of their nation, it is the following: Betting on “the other,” however that other looked like, whether it wore a beard or the Abaya,  was groomed or dressed up in a suit and a tie, the outcome hardly differs.

The sudden comeback to Lebanon on the part of the French is not devoid of Western ambitions nor is it an embodiment of the cries of ordinary citizens who are fed up with the ruling parties and Hezbollah’s rein on power.

However, one could draw on one particular gesture by the French president away from the visit’s political connotations. It is how humbled Macron was as he was able to see through the darkness and into the light of Fariouz.

Macron stood in both awe and appreciation for what Fairouz represents, a vision for a unified Lebanon, a dream in the making. A project that was never realized. 100 years into its birth and Lebanon is still in the making. Despite being a nation in shambles, we should look beyond all the chaos and destruction into what we can perhaps all agree on.

Following Macron’s visits, questions are swirling over whether Macron’s visit came to appease the Iranians by propping up Hezbollah as a force to reckon with. The French blessing of the prime minister designate is also in question given Hezbollah’s approval of the person.

This has pressed questions as to whether the French is strengthening Iranians foothold in the region in return for concessions on a potential revamp of the nuclear deal in the run up to the US presidential elections where Trump is trailing behind the democratic nominee Biden by about 8 percentage points, which could see him win the elections in November and giving Iran a seat back at the table.

Whether Macron is here to support the people in revolt against the system or simply setting the stage for a geopolitical reconfiguration of the region is something that only time could tell. In all cases, no-one is delusional to think that any Western visit to Lebanon would be to stage a coup against the establishment despite any show of support.

Calls for reform and the threatening of sanctions including asset freezes against political leaders accused of corruption is as far as their push for change could ever reach. This sentiment was mirrored by the Lebanese public towards the French president’s visit as the mood has significantly changed between the first and second visit.

Looking back in history, global powers only support the people once they have already succeeded in revolting against their oppressors. Only then would they give up even on their life-long allies when they find it is no longer viable for a system to hold onto power any longer.

The biggest takeaway from this folklore visit is that besides the fact that successful revolutions and sustained change are staged by the people themselves, it is hardly the aspirations of the people what motivates foreign powers to intervene in other nations.

In the case of Lebanon, it is the wider geopolitical goals of the EU in curbing Iranian nuclear ambitions, spearheaded by France to bring Iran back to commit to the Joint Comprehensive Plan of Action (JCPOA).

France is setting the stage in the event that a more lenient president comes and re-enters the agreement with Iran on its nuclear deal and that this demands that France remains open to Iran and Hezbollah –one thing that the countries of the West are ignoring is that they are betting on initiating talks assuming it is the same regime that they left off during Obama’s presidency.

Therefore, to assume that the moderate wing will be waiting for Biden with open hands to rejoin the agreement was a given that might not still be on the table. This hopeful approach also does not account for the more hardliners today compared to the time of Obama when the deal was reached.

Another takeaway is that our politicians could learn a lesson or two from Macron, who as a leader of one of the world’s most civilized nations was humbled as he stood before Fairouz. Our leaders should learn to be inspired by our icon of national unity that has survived all that has tarnished Lebanon’s dream of a nation and yet stood tall.

It could serve as a wakeup call for our political leaders to put their country first and rise above their egoistic and self-serving agendas to salvage this nation by choosing the path towards redemption.

While the carving up of nations by the Western colonial powers is agreed upon as not being their best speciality, it may take another 100 years to carve out Lebanon’s true identity. What the price of that is going to be is a secret to none.