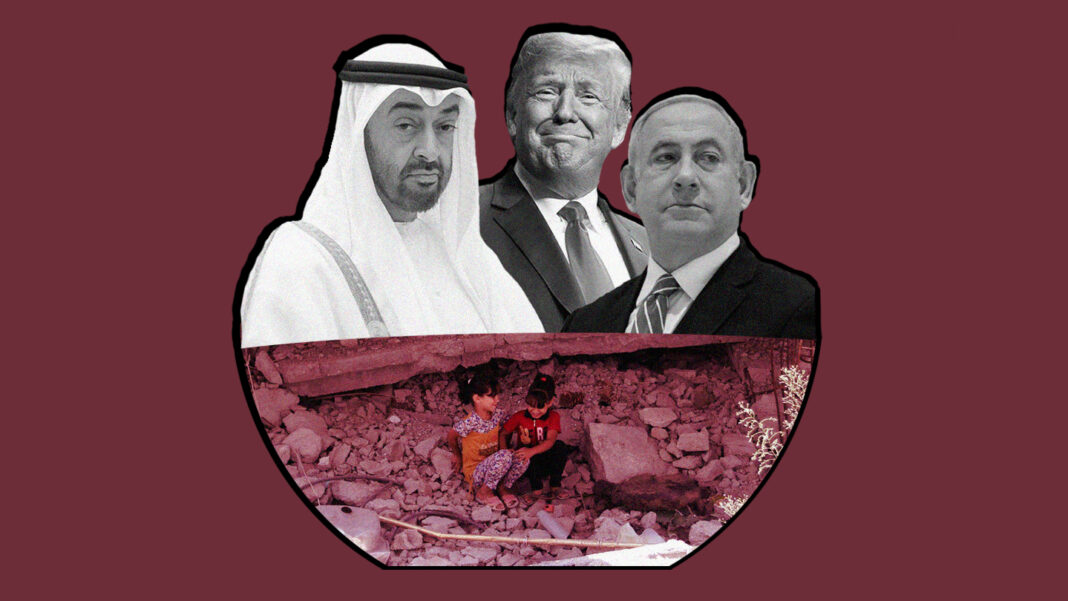 Last month, a joint statement was released by the United States, Israel, and the United Arab Emirates (UAE) to announce the “full normalization of relations” between the second and the last.

While this is not the first time a peace deal was struck between an Arab country and the Israeli state, many have since then noted a possible chain reaction given the developments within the Gulf and wider region.

Two days after the statement was released, Israeli intelligence minister Eli Cohen mentioned that he “expected” Bahrain and Oman to follow suit. Noting these possibilities, reactions amongst the region’s ruling bodies have ranged from a welcoming gesture to utter disdain.

In terms of popular appeal, an article published by the Khaleej Times outlet based in Dubai claimed that Arab residents of the UAE welcomed the initiative. It is however doubtful whether opposition to such a deal was given the space to express itself, especially given the UAE’s reprehensible human rights record on the level of free speech or expression and the right to assemble or organize.

In fact, a poll released by the Washington Institute for Near East Policy suggested that around 80 percent of Emiratis are dissatisfied with the deal. With regards to the rest of the region, demonstrations and protests in Palestine, Pakistan, and Yemen indicate that public opinion is not on the side of the UAE, whose ties with the United States has raised questions over the past decade.

However, one ought to be skeptical about how much public opinion even matters to the systems of power point-scoring one another after the deal. The imperative questions remain: How do authoritarian regimes cash these regional developments? And what does this entail for the fate of Palestinians?

Geopolitics as an instrument of war, not peace

While the region has a rich history of bottom-up protest, resistance, and transformation, the Arab-Israeli “conflict” has gradually become a top-down function utilized by dictatorial regimes to further their domestic and regional interests. The rhetoric revolving around this month’s normalization agreement falls into this pattern.

On one hand, Egypt, Oman, Bahrain, and Saudi Arabia either openly or tacitly welcomed the deal. As all four countries have faced difficulties coping with domestic opposition and calls for democratic transition since 2011, Donald Trump’s public “bribe” mentioned in the aforementioned joint statement aroused their interests.

“Along with the United States, Israel and the United Arab Emirates share […] a […] commitment to promoting stability through diplomatic engagement, increased economic integration, and closer security coordination.”

It’s no surprise that such a trade is rendered profitable for these regimes to sustain themselves, particularly as they feel threatened by the second wave of uprisings taking place in Algeria, Sudan, Lebanon, and Iraq in the past year.

Interestingly enough, the UAE was the Arab country most enthusiastic about Trump’s initial Palestine-Israel peace plan (dubbed the “deal of the century”) despite consensual Palestinian disapproval and despise.

Eventually, the UAE cashed in –two weeks ago, it was reported that the regime will soon be receiving a number of F-35 stealth fighter warplanes from the United States in a new push to sell weapons to the regime.

This is solely one point of the grander comprehensive plan put forth by US President Donald Trump in an attempt to amplify the US’ protection of Israel and blockade on Iran, also exemplified by his insistence on pushing an arms deal worth of $8.1 billion to Saudi Arabia a year ago in the midst of its deadly war on Yemen, waged in partnership with the UAE.

When “resistance” becomes a symbol of soft power

Iran, Syria, Turkey, and Hezbollah each vehemently condemned the peace deal. President of Turkey Recep Tayyip Erdoğan even hinted at the possibility of suspending ties with the UAE, claiming the role of a “leader” in the region and “negotiator” on behalf of Palestinians.

However, most analyses portray Turkey’s sudden extensive “pro-resistance” discourse as disingenuous, relating it to geopolitical tensions between the two countries in the region.

These tensions particularly mounted as both regimes propped up opposing sides in deadly and atrocious conflicts in Egypt, Libya, Syria, and the Gulf, pushing Emirati Minister of State Anwar Gargash in 2018 to suggest that Turkey is violating Arab sovereignty.

“For Erdogan, the UAE-Israel peace deal primarily acts as a method to fortify opposition, alongside countries like France and Greece, to Turkey’s expansionist foreign policy in the Middle East,” said Bachar El-Halabi, an Istanbul-based geopolitical analyst for ClipperData.

“Accordingly, Erdogan is attempting to establish himself as a voice for Arab & Muslim aspirations in Palestine, which continues to be a popular cause among them, in further instrumentalizing the cause as a form of soft power against his opponents,” he continued.

On the other hand, in a televised speech on August 14, Hezbollah Secretary General Hassan Nasrallah not only condemned the peace agreement, but went further to scorn ways in which authoritarian Gulf leaders scapegoat Iran for the region’s problems.

In the same speech meant to commemorate the July War of 2006, Nasrallah instrumentalized the peace deal in order to revive polarized comparisons between countries belonging to a “resistance axis” and those open to normalized ties, with the former constituting Syria and Iran.

This discourse is not surprising given Nasrallah’s recurrent tokenization of the Palestinian cause while fighting the Syrian regime’s battle against the opposition early on in 2013. Given these parallels, it becomes evidently clear that the regional “pro-Palestine” stance is utilized as a cover to protect authoritarian structures.

Nevertheless, given that the Syrian regime has never eliminated the possibility of “peace” with Israel in the past, nor has it hesitated to systematically crackdown on Palestinians in Syria’s Yarmouk camp, the “pro-Palestine” cover transforms into a dangerous ideological hegemony attempting to create a non-existent dichotomy between “good” (resistant) and “evil” (treacherous).

How do Palestinians pay the price?

While regional players find ways to “cash in” the “Palestine commodity,” Palestinians suffer the consequences in a plethora of ways.

The nominal exchange between the UAE and Israel was that the latter “suspend its annexation plans” in the West Bank. This entails that the UAE negotiated on behalf of Palestinians at a time when all Palestinians factions and the vast majority of the Palestinian population rejected the deal and its ramifications.

Nevertheless, the objection to “speaking on behalf of Palestinians” is not solely a rhetoric notice, but also revolves around rejecting ways in which the deal “lowers the bar” and dismisses a radical, structural, and just solution to the conflict: ending the occupation, guaranteeing the right of return and freedom of movement, and dissolving all systems of racial discrimination.

“Lowering the bar” reduces the discussion to a mundane and technical assessment of the number of settlements present in the West Bank and allows Israel to commit its violations with impunity (as it has been doing in Gaza and South Lebanon for the past few weeks).

Finally, the deal feeds into the aforementioned polarization between “resistant” regimes and “treacherous” monarchies. This is happening at a time when the voices of millions of Middle Easterners (including Palestinians) are attempting to break from the narratives propped up by emperors and dictators who cannot be further away from the causes they hold dearly.