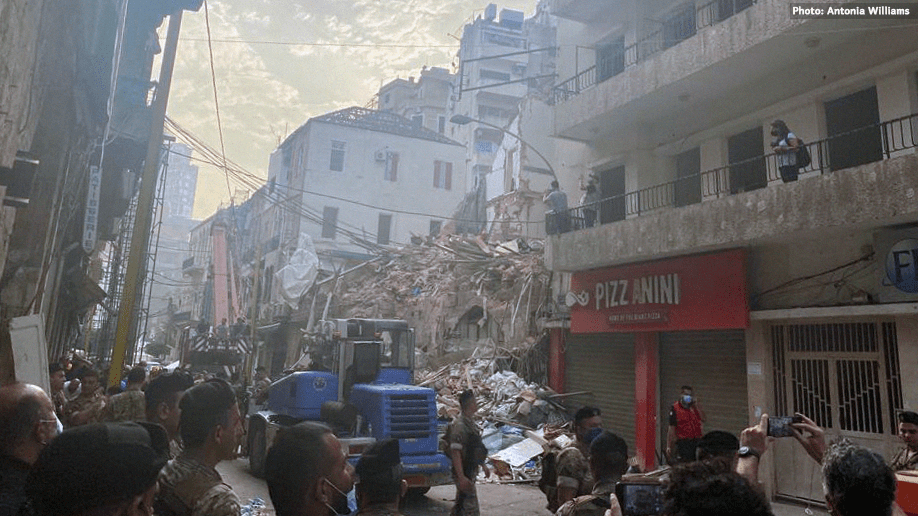 Dozens of rescue workers continued to sift through a collapsed building in Beirut’s Gemmayze neighborhood on Friday, over a day after detecting pulsing signals beneath the rubble.

For the past 27 hours, Chilean rescue workers alongside members of the Lebanese Civil Defense have continued to pluck off layers of concrete, debris, and remnants of personal belongings in a bid to unearth the faint signs of life.

The effort comes one month after a deadly explosion ripped through the Lebanese capital that killed 190 people, wounded more than 6,000, and left nearly 300,000 people homeless.

The search and rescue operation began Thursday evening after Flash, a sniffer dog with the Chilean rescue team, detected signs of life beneath the rubble. By nightfall, the workers continued their operation with light projectors as they maneuvered around the site.

Late last night, the Lebanese army asked rescue team TOPOS CHILE to suspend the search until 8 AM Friday because they could not find a crane to carry forward. Public outcry from those at the scene soon followed, and a crane was brought to the scene by onlooking protesters.

While the source of the pulsing signal is still not known, it was enough to set off a desperate search as the teams alternated between manpower and audio detection equipment designed to scan for signals or heartbeats.

Every several minutes, they would ask crowds of people and journalists near the scene to turn off their cellphones and stay quiet to not interfere with the sounds being detected by their instruments. These short intervals grew increasingly eerie as stillness crept over the site, not a word was spoken, not a whisper nor a sound.

But with passing hours, the chances of finding life beneath the rubble are growing increasingly slim.

On Thursday, in another grim reminder of last month’s explosion, the Lebanese Army said it had found 4.35 tons of ammonium nitrate near the Beirut port. Although it was not immediately clear whether the chemicals were part of the larger stockpile that caused last month’s explosion, which authorities say was about 2,750 tons– it has nonetheless left the public unnerved.

According to the army statement, a team of engineers discovered chemicals in four containers stored near the port. It added that army experts were “dealing with the material,” according to a statement carried by the country’s state-run National News Agency (NNA).

According to the Associated Press, days after the August 4 blast, French and Italian chemical experts working amid the remains of the port identified more than 20 containers carrying dangerous chemicals. The army later said that these containers were moved and stored safely in locations away from the port.

“There are two separate investigations,” civil society activist and political analyst Chadi Nachabe, said. At the request of Lebanese authorities, Nachabe added that “[the] French the Americans are also looking into the source of the explosion.”

While the findings have yet to be released, the move has pushed the Lebanese government further into domestic and international scrutiny for allowing the highly explosive material to be stored at the heart of the Lebanese capital.

However, as foreign leaders called for an international investigation into the explosion, the Lebanese government has created roadblocks and has resisted their demands for a transparent investigation.

According to state media, the latest discovery of explosive chemicals comes days after the judicial investigator in the case issued arrest warrants for Beirut port’s harbor master and the general director of land and maritime transport.

Former and current customs officials have been called in for questioning, but it was unclear if Thursday’s discovery was related to the investigation or part of the port authority’s attempts to prove its competence.

So far, authorities have detained 25 people over last month’s explosion, most of them port and customs officials.

Former PMDiab, who resigned under pressure following the explosion, is the most senior politician to testify before judicial authorities.