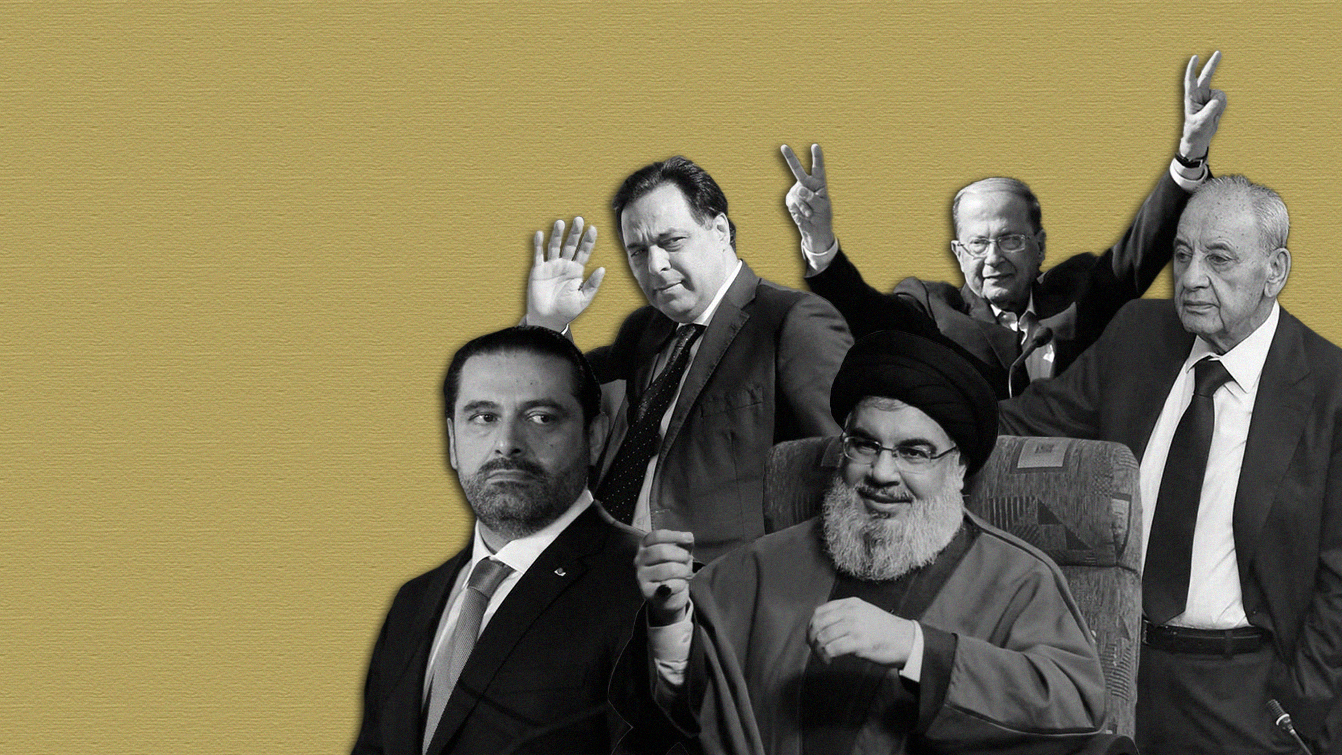 Misappropriation of government funds, embezzlement of public money and siphoning off state resources is all what successive governments have mastered since the end of the civil war. It embodies the definition of a kleptocratic state, a state that is both morally and politically bankrupt.

Corruption has been eating up the state from the inside out, disintegrating public institutions, rendering them dysfunctional. Worse yet, the system remains operational for a selected few who stand to benefit from a system founded on nepotism and favoritism.

What happened at the port of Beirut, storing a ticking bomb within a few kilometers of a residential area at the heart of the capital, exceeds what is currently being categorized as a mere act of negligence. The Beirut explosion is an act of terror in every sense of the word, and there’s an undeniable collective responsibility that falls on a corrupt sectarian power-sharing system that led to an explosion powerful enough to rip through the heart of the capital.

Despite evidence, officials keep to throwing the blame around

It has been reported that the customs, port management, security agencies and the military have all sounded the alarm over the years about the ammonium nitrate stockpile that is being stored at the port. Everyone in the chain of command has evaded responsibility for the detonation of 2,700 tonnes of ammonium nitrate that killed more than 200, displaced hundreds of thousands and destroyed a capital with an estimate of close to $5 billion in losses.

Correspondence documents have emerged of several public officials and port employees warning of the ammonium nitrate stockpile. Despite being warned about the deadly chemical compound, officials failed to prevent the explosion.

It seems that these correspondence were only made as a pretext in the event that a mass murder were to happen like the one Beirut had just witnessed. Questions rise as to whether these warnings were only made as a political cover for those in power, while the intention was to keep the deadly material and not get rid of them as was stated in these letters.

Legal documents surfaced between the director general of Lebanese Customs, Badri Daher, who is now under arrest, and the Beirut judge of urgent matters repeatedly asking for guidance on the need to export or sell the product while warning of the danger that it poses being kept at the port.

Correspondence letters swirling around between the judiciary, military, customs and public officials over the years without any action being firmly taken in that regard seem to suggest that this was all part of an act to give the impression that different officials performed due diligence while the real intention was to keep the product at their disposal.

This does not absolve the customs officials of their responsibility. Despite any shortcoming from the judiciary, Lebanese customs authorities failed to take corrective action at the right time and to inform officials at the highest levels who might have prevented a mass murder of this scale.

Investigative journalists argue that 18 letters were sent between 2014 and 2017 to the Beirut judge of Urgent Matters, whose decision regarding the shipment does not fall within his remit.

It also begs the question as to why the judge who kept asking the customs chief to refer the case to the specialized judicial body did not take further action as a public servant, knowing that the explosive materials endanger hundreds of thousands of civilian lives.

Lebanon’s leaders, including the president and prime minister, were warned in July about the explosives at the port but failed to take action, according to documents published by Reuters.

The president has himself suggested in a press conference that he had limited responsibility, saying he had no authority over the port and that previous governments had been told about the explosive chemicals.

Even if it’s not directly responsible for the blast, Hezbollah partakes in a system that compromises the formation of a functioning statehood

Just like every other public institution, the port is divided upon the ruling class where each sect has leverage over a part of the port. Hezbollah and Amal supporters have always denied full control over Beirut port, while their opponents find their denial absurd and used only to deceive public opinion.

However, despite any leverage Hezbollah has at the port, the group shares the burden for failing to protect a public entity, part of which is under its watch either directly or through its allies, and thereby carries some responsibility for the corruption that led to the explosion.

Officials running the port and politicians in their relevant ministries had been aware of the dangers of the material, that had led to one the largest non-nuclear blasts in history with 10th the intensity of Hiroshima atomic bomb, and were either silent, complicit or complacent –just like the public officials whose only action was to start a correspondence with a judge as they sat around and waited for the explosion to go off.

No direct involvement of Hezbollah has yet been made according to official statements. One thing that is undeniable is the sway that Hezbollah holds over the country, both politically and militarily.

Hezbollah’s involvement in Syria, Iraq and Yemen is not something they care to hide. Hezbollah boasts day in and day out about its cross-border incursions and glorified achievements within the “axis of resistance”as being  preemptive measures, to protect Lebanon against an external attack.

Yet, Hezbollah partakes in a system that compromises Lebanon’s national security, including at a port where it shares a piece of the cake along with the rest of the political class.

This is not a call for blame which prior to the result of an investigation is nothing short of a political attack based on mere speculations.

What is to be blamed for is the security breach that was allowed to happen under Hezbollah’s radar, coupled with a system of corruption and clientelism sponsored by a political establishment that allowed 2,700 tonnes of nitrate to languish in the form of a nuclear bomb strapped to the heart of Lebanon.

It is the security breach that should be accounted for and for Hezbollah to deny any knowledge of the ammonium nitrate is political heresy. What good is scoring “regional” heroic victories whilst failing tragically in safeguarding our national border?

The tacit agreement between Hezbollah and its allies, whereby Hezbollah turns a blind eye to the corruption of its allies in return for more of the same with regards to Hezbollah’s arms, is part of an equation that has perpetuated a system of governance marred by corruption and profiteering.

The Beirut blast signifies the blowup of a fraudulent political class in its entirety, albeit in the face of the Lebanese.

Hezbollah supporters claim that the Beirut explosion has been manipulated so as to tighten the noose around the political party and militant group by reigniting calls for the disarmament of Hezbollah.

It is almost incomprehensible that Hezbollah’s security apparatus, which extends over border crossings, had failed to know about the explosive material –assuming that they had nothing to do with the tonnes of ammonium nitrate that were confiscated at the port en route to Mozambique.

Hezbollah’s Secretary General is fully aware of the amount of destruction that a strike could have on depots of ammonium nitrate. A previous speech made by Nasrallah has been circulating on social media about the ammonium nitrate tanks in Haifa-Israel.

The part circulating did not catch the essence of his speech. It was made to look as if Nasrallah is sanctioning a strike on the ammonium nitrate tanks in Haifa, while he was using his knowledge of the material and successive warnings by Israeli officials as a deterrent against a potential Israeli attack on Dahieh, the southern suburbs of Beirut and Hezbollah’s stronghold.

He was quoting Israeli public officials as they were criticizing their government for putting 15,000 tonnes of that same material in Haifa, which could in effect wipe out the whole city and kill tens of thousands.

Nasrallah had said they did not strike these tanks when they could have back in the 2006 War, but warned against any attack on Hezbollah –which in turn could escalate into a full-blown war that could see the lives of Haifa residents being threatened in a strike that could have the effect of a nuclear-bomb.

To think that Hezbollah had known about the ammonium nitrate tanks in Haifa and not factor the presence of the same product at Beirut port into the same equation Nasrallah was warning about –but in reverse– is the manifestation of either ignorance or arrogance.

On the other hand, to assume that they knew about the ammonium nitrate in Haifa and not the tonnes of the same product lingering just a few kilometers away from their stronghold in Southern Beirut is simply unconscionable.

Based on official statements and even international reports, no direct correlation has yet been established between Hezbollah and the ammonium nitrate at the port of Beirut.

While the group may not have been directly responsible for either the product or its storage, it cannot escape scrutiny as having held key ministerial positions and public offices both in the government and at the port since 2013, when the ship was impounded carrying tons of ammonium nitrate on board.

In the face of the terror that has been inflicted on the capital and given Hezbollah’s role as a key player in Lebanon’s political arena and beyond, the group is surely to be held accountable before its people –along with the rest of the political class, who have also enjoyed a sizable influence over the port as if it were their own private property.

The possibility of an Israeli attack throws into question Hezbollah’s role as a deterrent force against an Israeli aggression. It also amplifies calls for accountability in the face of a major political player leaving it exposed to public scrutiny.

This public scrutiny comes against the backdrop of a Shiite milieu where the vast majority of which dares not question their leader or reconsider their support or commitment to the group.

Everyone is trying to evade responsibility where reports showing almost every security apparatus of the port warning of this time ticking bomb, but to no-avail.

The product languished at the port for six years prior to exploding. Officials vindicate themselves today by saying Lebanon’s inept system failed to heed their warnings, but none of them had even bothered to do the most basic act of all: Leak the presence of 2,700 tonnes of ammonium nitrate to any media outlet and let it do what public officials, the judiciary, customs and port management and security apparatus had failed to do combined.

Embarking on a journey to fight terrorism abroad starts from within by cleansing public institutions from corruption, nepotism and favoritism. Before getting caught up in endless regional wars, isn’t it more pressing that Hezbollah engages in an internal war against home-grown terrorism?

There is a collective responsibility for anyone who aided, abetted or even turned a blind eye in the lead up to the explosion.

Amidst a national memory weighed down by the failure of international probes to bring about justice and a national judicial system that stands accused of being inept, it seems we are doomed to be forever entangled between the East and West; between two forms of nationalism with very little in common; between two different imaginings for our beloved Lebanon.

Along the way, we have been slayed at the hands of a resilient corrupt system that keeps regenerating itself by feeding off sectarian divisions while its leaders have the audacity to call for the abolishment of sectarianism in favor of a secular state. The question that repeats itself now is whether this system would survive yet another scandal tarnished with blood.