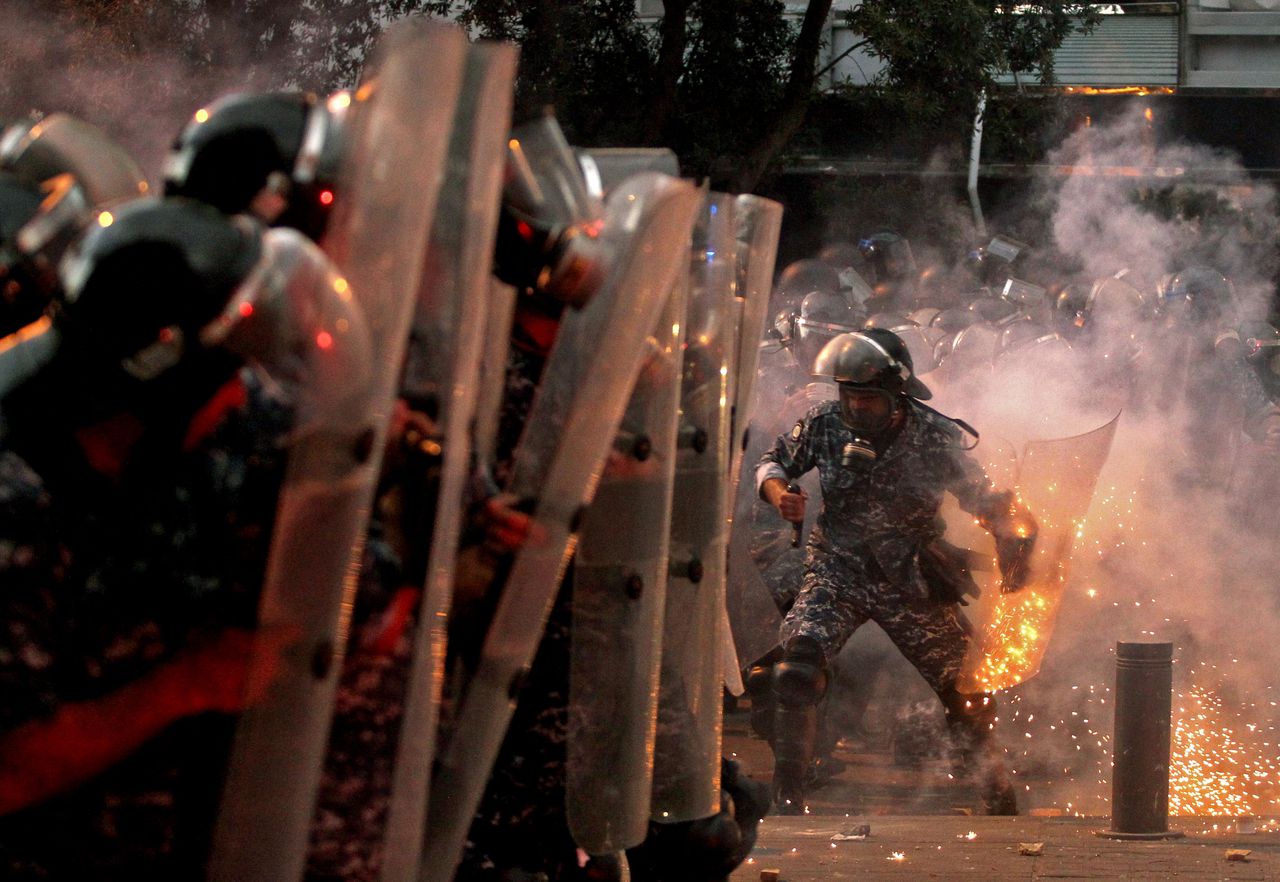 The explosion was triggered by a fire that caused the explosion of an estimated 2,750 tonnes of ammonium nitrate held at Beirut’s port without safety measures since 2014. The highly flammable substance caused a massive explosion that was heard so far as Cyprus.

The government declared Beirut a “disaster” city, and handed over control to the army as a state of emergency was declared.

The army can legally prohibit protests in a state of emergency

According to the Legal Agenda, the army is entitled towards installing a number of laws underneath the current state of emergency. In essence, these laws prohibit protests and can be used to threaten the revolution.

These laws include: Closing down any spaces that allow for large gatherings, entering people’s homes at any time, and prohibiting gatherings that “breach security” among others.

So far, no such laws have been implemented, but with the current power bestowed upon the army, these laws may be used to intimidate and scare demonstrators.

In the previous months, activists and journalists alike began to speculate on the future of Lebanon’s demonstrations. On June 10, Beirut Today published an article discussing how violence is only expected to escalate as the masses grow tired with the ruling class’ refusal to step down.

“The ruling class makes use of several tools in our oppression, from the sectarian rhetoric that fuels horizontal divisions, to violence through militias and the threat of civil wars, to the illegal measures being taken by banks,” said activist Bachir Nakhal, who had previously been detained during a protest, in our previous article.

“There will be a lot more violence. People are starving and a lot of pressure is building up that will end up exploding, and things might get out of hands,” he added.

Despite not implementing laws, security officials are using other, violent tactics to intimidate and scare demonstrators.

Security forces have practically openly-waged a war against protestors

Following 10 months of protests since the beginning of the October 17 revolution, the government had yet to present the people with any feasible solutions to the economic crisis gripping the country –instead burdening them with yet another catastrophe.

In the days that followed the blast, individuals began to openly call for the hanging of all politicians immediately. Anti-government groups and individuals began to circulate a wide call for protest on August 8, inviting thousands to participate in voicing out their anger against the ruling class.

Anger fueled bolder moves by protesters, who would go on to break into and occupy several ministries and burn a photo of President Michel Aoun. In Lebanon, insulting the president is punishable by up to two years in prison.

On social media, expectations of violent confrontations during the protest began to circulate. Activists spoke of how this would be a new turning point for the revolution: “What comes after August 4, will not be like that before it.”

Earlier today, Beirut protester shot in the neck says that he will keep fighting “tomorrow and today and every hour and every day — as long as there is breath in us.” pic.twitter.com/G3G1oDJnXq

The protest called for a march beginning at 4 PM in front of the now-demolished Electricite Du Liban company, reaching Martyr’s Square at 5 PM. By 3 PM, Martyr’s Square was already filled with thousands of individuals, some of which were children and elderly.

Gallows were hung with images of the country’s politicians in them, including President Michel Aoun, Hassan Nasrallah, and Speaker of Parliament Nabih Berri.

Around 4 PM, parliamentary police began to heavily throw tear gas at any protestor –peaceful or not– who came within the close vicinity of parliament. The entrance, near Le Gray hotel and the Annahar building, was then blocked off with barbed wire.

Soon after, tear gas began to rain down on every area in Downtown Beirut. By 5 PM, masses had been dispersed towards nearby areas such as Saifi and Gemmayze. Around 6 PM, reports spread of rubber bullets and live ammunition being openly fired at protestors.

The war waged upon demonstrators by security forces was expected, and violence will continue to intensify as peaceful protests grow ineffective. Masses have radicalized themselves to face security forces who lack empathy towards the anger and pain of the people.

“Take off the suit and come stand with us, then you can wear it with honour again,” yelled one protestor at a line of soldiers. “Tell us what you get from being with them? We really don’t understand it, why are you doing this to us?”

Over 700 protesters were injured that day

Numbers decreased as the night went on, yet many protestors refused to leave. Instead, they chose to exert defensive tactics against security forces. Some shot back the tear gas canisters using tennis rackets, while others tore off nearby metal barriers to use as shields.

Tear gas continued to rain on protestors for the duration of the night, while the army resorted to viciously beating demonstrators away from the masses in the square and ministries.

Red Cross data from August 8 shows that over 700 individuals were injured that day. Many demonstrators sustained life-long injuries, such as losing their eyes.

All of a sudden, Army started beating protesters viscously near ring. As I was filming, army beat me and threw my phone away. Army still beating other protesters. #LebanonProtests pic.twitter.com/COQbWRGzC8

Soldiers, police and protestors also injured at least 14 journalists on the ground. One officer from the Internal Security Forces (ISF) died after reportedly sustaining a gun shot from Parliamentary Police that caused him to fall down an elevator shaft.

Despite this, protestors achieved a number of victories on August 8, such as taking over the Ministries of Foreign Affairs, Economy, Energy and the Association of Banks for a few hours.

On the eve of August 9, demonstrations resumed. A man was successfully able to remove a metal barrier on the road leading to parliament, prompting officers to fire tear gas and rubber bullets, dispersing the heavy crowd within minutes.

Protests resumed outside of parliament on August 10 and 11, with tear-gas and rubber bullets now the norm.

This is not the first time the police state has openly waged a war against its people. The state and its military branch have proven themselves to be ruthless against the grieving masses who have lost friends, family, home and a fifth of their capital.