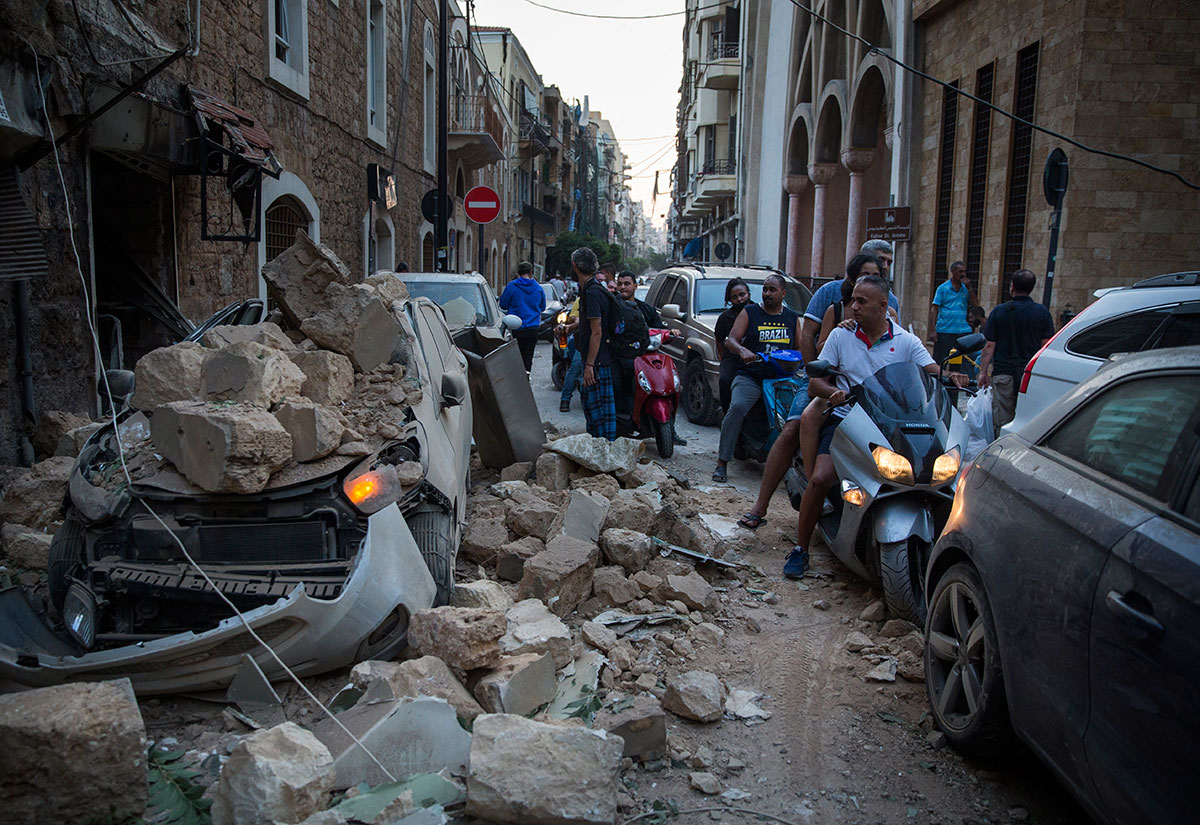 Cracks appeared in a seemingly weakened Lebanese government on Sunday following a series of resignations of key ministers amid the political fallout of a deadly explosion that decimated swathes of Beirut, killed more than 150 people, and wounded some 6,000.

Public rage took a new turn this weekend as thousands of protesters descended upon downtown Beirut, calling for the fall of the Lebanese government in the wake of last week’s explosion and months of economic crisis.

Protesters clashed with security forces for the second consecutive day on Sunday. Security forces fired dozens of tear gas in a bid to disperse demonstrators from hurling rocks and shooting fireworks onto a well-fortified area leading to the Parliament building.

“I believe that my resignation has become more of a duty now,” said Yacoubian.

Lebanon’s Information Minister, Manal Abdel-Samad was the first minister to resign since the August 4 explosion.

“Since change in Lebanon remains elusive and the reality does not match our ambitions, and after the horrible explosions that hit the city, I announce my resignation from the government,” she said in a statement. Her resignation comes as about half a dozen lawmakers offered their resignation in protest over the government’s management.

Local media reported that another minister, and a close advisor to Prime Minister Hassan Diab, was also expected to resign. Diab met with his Cabinet reportedly to discuss the resignations Sunday, but there were no comments after the meeting.

The head of Lebanon’s Maronite church called on the entire government to step down in the aftermath of the explosion.

The Maronite patriarch, Bechara Boutros al-Rai, joined the widespread calls of people pressing Diab’s Cabinet to step down following the explosion, which he said could be “described as a crime against humanity.”

“It is not enough for a lawmaker to resign here or a minister to resign there,” Rai said during a Sunday sermon. “It is necessary, out of sensitivity to the feelings of the Lebanese and the immense responsibility required, for the entire government to resign, because it is incapable of moving the country forward.”

Three more lawmakers announced they were resigning from the 128-seat Parliament on Sunday, joining four others who declared it earlier. Parliament is due to convene later this week.

As fury boiled over central Beirut on Saturday, thousands of enraged protesters blamed the ruling elite for the criminal negligence, chronic mismanagement and corruption believed to be behind Beirut’s deadly explosion.

Hundreds of tons of highly explosive ammonium nitrate, which is used in making fertilizers and bombs, had been stored for six years without any safety measures at the port warehouse in the heart of the Lebanese capital.

In a televised speech on Saturday evening, Diab said the only solution was to hold early elections, which he planned to propose in a draft bill. He said he needed two months to reach an agreement with the country’s factions. But for Lebanese struggling from a disastrous economic collapse and shattered homes, discussion of new political agreements falls incredibly short.

Protesters set up gallows and nooses in central Beirut and held mock hanging sessions of cut-out cardboard images of top Lebanese officials. Many held signs that read “resign or hang.”

On Saturday, a group of protesters in Achrafieh stormed and occupied the foreign ministry. Others instead fanned out around the city storming several ministries and briefly occupied the Foreign Ministry. In the Economy and Energy Ministry, protesters ransacked offices and seized public documents they said would prove corruption has grown rampant in the government.

Authorities have been accused of using excessive force against protesters and at least a dozen journalists and other media workers were attacked while covering the latest protests, according to Kareem Chehayeb, journalist at independent news site The Public Source.

On Sunday, Human Rights Watch (HRW) released a statement in which they reviewed testimonies and verified footage showing a protester who had been shot by a rubber bullet in the neck and another in the chest.

The watchdog organization also witnessed security forces fire a tear gas canister directly at a protester’s head, in violation of international standards, severely wounding him. The protester was standing in the parking lot, next to the medics’ station.

Meanwhile, a doctor at Beirut’s Hotel Dieu Hospital tweeted that his team treated a patient whose heart had been punctured by a rubber bullet.

Two protesters told HRW that they had been hit by pellets, while another protester witnessed a friend being shot by what looked like small pellets to the chest. He also showed HRW researchers a video documenting the injuries.

According to the Red Cross, at least 238 protesters were wounded in downtown Beirut –63 were transported to nearby hospitals, and 175 were treated at the scene of the protest.

Riot police on Saturday confirmed shots and rubber bullets had been fired. It was not immediately clear who fired the shots.

Some 36 countries took part in the virtual donor conference led by French President Emmanuel Macron, but world leaders and international organizations warned the aid will only be made available until Lebanese authorities commit to political reforms demanded by the people.

The French president also repeated his call for political and economic reforms, which he said “would allow the international community to act effectively side by side with Lebanon for the reconstruction.”

In a joint statement, the donor countries concluded that financial aid will be “directly delivered to the Lebanese population,” and offered help for an “impartial, credible and independent inquiry” into Tuesday’s disaster.

The funds will be closely monitored, said Macron, and will be routed through the UN, international organizations and NGOs rather than the Lebanese government –another key demand of the Lebanese public, which fears the funds would be lost to corruption.

The International Monetary Fund (IMF) said on Sunday it was willing to redouble efforts to help Lebanon after the devastating blast that hit Beirut, but under the condition all the country’s institutions show willingness to carry out reforms.

In a statement, IMF Managing Director Kristalina Georgieva laid out the expected reforms, including steps to restore the solvency of public finances and the soundness of the financial system, and temporary safeguards to avoid continued capital outflows.

“We are ready to redouble our efforts, but we need unity of purpose in Lebanon. We need all institutions to come together determined to carry out much needed reforms,” Georgieva said.

“Commitment to these reforms will unlock billions of dollars for the benefit of the Lebanese people. This is the moment for the country’s policymakers to act decisively. We stand ready to help,” she said.

But Macron’s response as he walked among crowds in Beirut and in a later speech was unusually blunt: The aid “will not fall into corrupt hands” and Lebanon’s discredited government must change.

A day after the international conference, Iran’s Foreign Ministry released a statement asking the United States to lift sanctions against Lebanon if the country is “honest about its assistance.” Iran also asked other countries to refrain from pushing agendas through the blast.

“The blast should not be used as an excuse for political aims,” said Iran’s Foreign Ministry spokesman Abbas Mousavi, “The cause of the blast should be investigated carefully.”

Meanwhile, Hezbollah leader Hassan Nasrallah strongly rejected on Friday claims that his Iran-backed Shiite group had stored arms at the Port of Beirut, the site of last week’s deadly explosion.

“I categorically deny” such rumors, Nasrallah said in a televised speech three days after the explosion which ripped through Beirut. “We have nothing in the port: not an arms depot, nor a missile depot nor missiles nor rifles nor bombs nor bullets nor nitrate.”