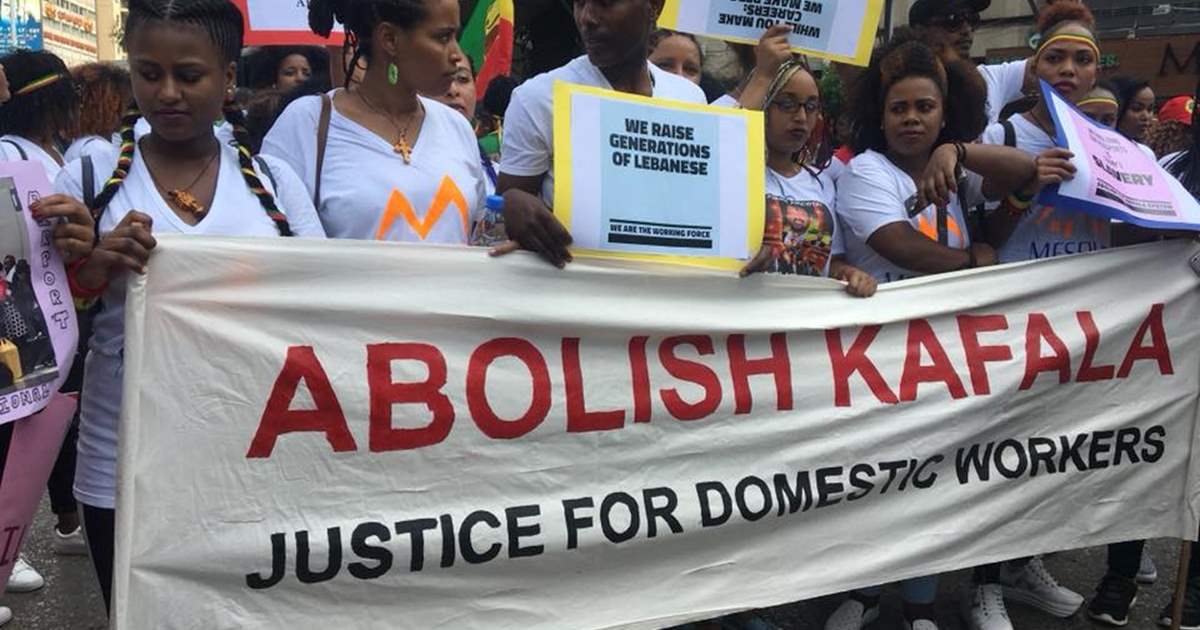 “The new model contract should be subject to an oversight mechanism to ensure that it is enforced and that employers who violate its provisions are held accountable,” read today’s statement.

Kafala is a sponsorship system that binds the legal residency status of the migrant worker to their contract with the employer. Kafala limits the basic rights of migrant workers, putting them at a very high risk of exploitation and abuse.

“A revised contract that recognizes and protects workers’ internationally guaranteed rights would be a positive first step to ending the Kafala system and protecting migrant domestic workers.”

“[This] sponsorship system does not only facilitate committing abuses but also guarantees impunity,” said Nizar Saghieh, co-founder of Legal Agenda. “If we were looking for the best type of exploitative system, we cannot find a better one [than Kafala].”

The economic crisis, compounded by the COVID-19 pandemic, has made life for migrants in Lebanon even worse. Many have reported that incidents of abuse increased  during the lockdown, while others have said that their employers slashed their salaries – if paid at all.

Since May, employers have abandoned hundreds of workers outside their consulates or embassies, often without money, passports, or their belongings, and without return tickets for workers who are unable to afford expensive repatriation flights to their home countries.

In April, Amnesty International and Médecins Sans Frontieres (MSF), expressed concern over the wellbeing of migrant workers in Lebanon.

Amnesty urged the Lebanese government to “ensure that migrant domestic workers are protected from exploitative working conditions during the lockdown and that all domestic workers –including the undocumented– have access to healthcare during the pandemic.”

Meanwhile, MSF launched an emergency medical helpline for migrants affected by the crisis and in need of medical care. In April, MSF documented a dramatic decline in migrant workers’ conditions that has had a dire impact on their physical and mental health.

Impact Lebanon, an initiative hub aimed at pursuing and delivering impact in Lebanon, hosted a webinar titled “Kafala: The Road to Abolition” in collaboration with Lebanese Diaspora for Action and Meghterbin Mejtemiin.

Joined by a panel of activists and experts on Kafala, they discussed and reviewed reforms as well as necessary changes to restructure a broken social system.

Without Protection And Accountability

The situation has been especially precarious for domestic workers, particularly during periods of lockdown when both their movements and access to healthcare are more restricted than usual.

“There is nothing that protects domestic workers,” says Rahaf Dandash, coordinator of the Migrant Community Center in Beirut, an anti-racist movement. “Protecting migrant workers means putting them under labor laws, giving them their rights and freedom to work and live in their homes. But we are not seeing any of this.”

Dipendra Uprety, a former migrant worker in Lebanon, co-founded This is Lebanon (TIL). The organization is the first to expose and name abusers as part of the strategy Uprety believes will, as a result, deter others.

For migrant workers, TIL has become more than a hotline to report their abuse. It provides them with more accountability than the Lebanese justice system ever will.

While online platforms help workers seeking accountability, Dalal Mawad, a journalist with the Associated Press and panel moderator, says that to implement proper changes “we also need to see these changes go through the judiciary and state institutions…We need  accountability through a structural and sustainable mechanism.”

Reforms and contracts vs. abolishing

A new contract proposed in March aims to give workers greater protection, a possible step toward more extensive legislative changes for the 250,000 domestic workers in Lebanon.

The proposed contract, which is still being negotiated, would provide domestic workers with the same legal rights as any other employee.

Although advocates and rights groups have long sought reforms to the country’s sponsorship system, others remain skeptical.

In 2009, the Ministry of Labor also worked on a unified contract. But without any enforcement mechanisms in place, the contract was never implemented.

“There is a fundamental problem with contracts, without a structured mechanism employers can breach [it] without any consequences,” Dandash said. “We cannot keep talking about the reform when it’s simply not enough to solve the problem.”

At the end of the day, Dandash said, “we can try and reform, but we really know that we need to abolish the system. That’s making a difference.”

Abolishing Kafala as a whole will be difficult. “The problem with an ugly system like Kafala is that it’s hard to turn around,” Saghieh says.  “It’s a well-connected organization that works hand in hand with General Security.”

“We need to focus on the fact that the Kafala system has gone beyond the issue of human rights,” Saghieh says. “It’s a highly political and economic issue as well. And it’s about how we conceive our society, and to decide how we want to be in the future.”

Read also: How Kafala dehumanizes and takes power away from migrant workers