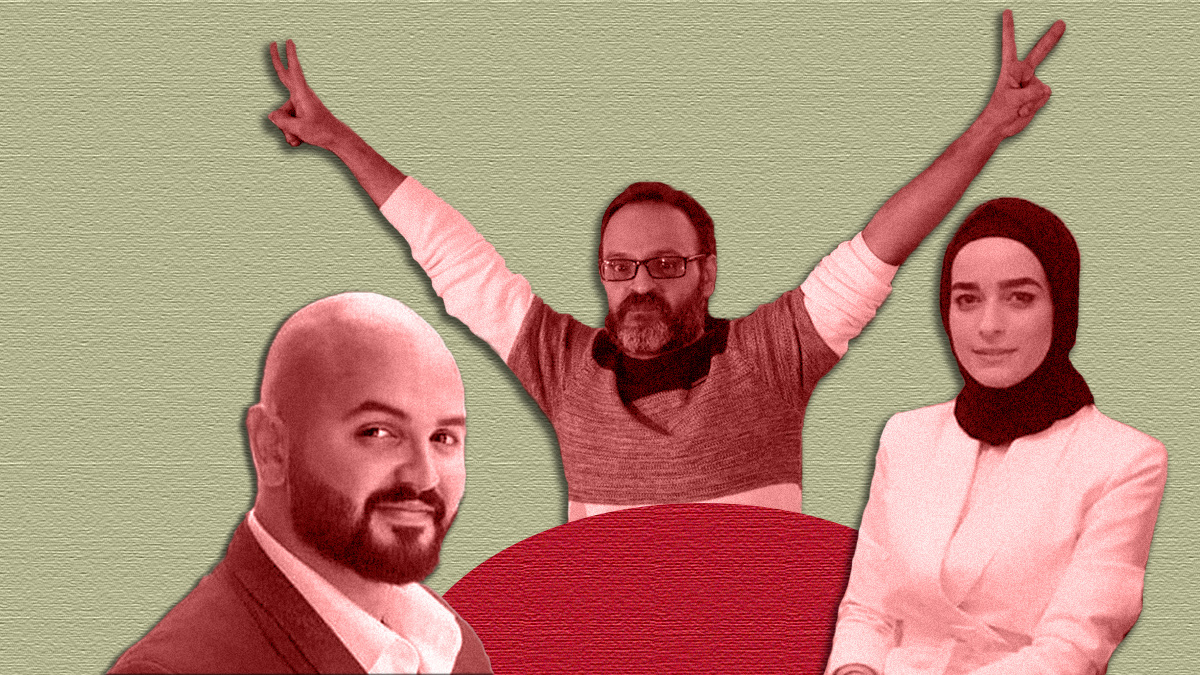 The purpose of the term was to highlight ways in which activists can humorously scorn the excuses, propaganda, and rationale utilized by Arab military dictatorships to justify their retaining of brutal and authoritarian securitization policies.

This “manual” is not exclusively made for formal political figures, as its directions have been recurrently shared by the system’s supporting intellectuals, journalists, analysts, and communities. In Gramscian terms, through repetition, the “Arab Tyrant Manual” gradually becomes the general “common sense” for a subsection of the population.

Baghdadi, following his pro-democracy work, was deported from the UAE in 2014 for his publicly articulated solidarity statements with the Arab uprisings.

While Lebanon has historically attained a reputation of maintaining a bare minimum of freedom of press and association, its current government seems to have followed in the footsteps of its neighbors and adopted the “Arab Tyrant Manual.”

In a sense, it is increasingly clear that the state has lost the legitimacy and “supremacy” (Haybeh) from the perspective of its citizens.

Taking into account popular responses ranging from basic organization and/or mobilization to public suicides, the state has not hesitated to deploy its military force in each of these instants.

The state’s securitization crisis climaxed with the arrest of activist Michel Chamoun, who explicitly challenged Michel Aoun to investigate why people are insulting him. Consequently, Chamoun was forced to sign a pledge preventing him from insulting the President in the future.

These tactics did not easily result in silence. In response to the heavy criticisms and expressed profanity of many activists on social media platforms, security forces have been calling in and detaining activists for a few days, namely from the Bekaa region.

As many more critics of this increasingly alarming level of state repression surfaced, General Security utilized a wide range of fear mongering tactics, such as leaving call-in notices on the doors of artists and critics.

Film director Omar Layza experienced this on the first of July. Another such instance came two days later, following protest escalations led by political activist Wasef Al Harake on issues pertaining to the energy sector and the arrested dissidents.

The human rights lawyer was brutally beaten up by four thugs. Commenting on the issue from the hospital after the attack, he stressed that the “message was well received, and we’re proceeding.”

Coercion is not the only means through which the “Lebanese Tyrant” has bullied the population into submission. Melhem Khalaf, once renowned and praised as the head of Lebanese BAR association, now incorporated moral statements shaming activists’ profanity during his speeches.

Despite continuously assisting detainees imprisoned by the state for “insulting the Presidency,” Khalaf felt obliged to release a statement condemning those using insults and profanity, reiterating that it is illegal under the law.

While some have sympathized with Khalaf, suggesting he was left with no choice, others have found it impossible to overlook how he was reinforcing the discourse and sentiments of the “Arab Tyrant Manual.”

The primary issue with the “Arab Tyrant Manual” is that it is not exclusive to the official tyrants, but may as well potentially become a language shared by those believing they are at the forefront of resistance and transformative change.

Geopolitics and the “treason” card

Historically, Arab dictatorships have employed a geopolitical discourse revolving around “fighting the enemy” and “preserving national unity” in face of an “external regression” to garner legitimacy.

While Nasser’s Egypt and Assad’s Syria used Israeli expansionism as the go-to excuse to justify the continuation of a state of emergency and the obstruction of basic democratic processes, Gulf monarchies preferred to scapegoat Iran’s geopolitical ventures.

Recently in Lebanon, Hezbollah leader Hassan Nasrallah found it convenient to shift the prevalent rhetoric of “popular resistance” against the ruling class to that of “steadfastness and resilience” against American sanctions and “pressures” on the Central Bank.

“The Americans are interfering and pressuring Lebanon’s Central Bank (BDL) to prevent it from injecting dollars into markets,” said Nasrallah in a televised speech on the 25th of June.

A week later, Deputy Speaker of Parliament Elie Ferzli, who is historically known to have Syrian and Hezbollah backing, claimed that Israel wanted to see the banking sector breakdown. He goes further to reiterate his earlier comments that the entire campaign facing the banks is an Israeli plan.

Oddly enough, the Central Bank and commercial banks have historically complied with all regulations and targeted sanctions pursued by the United States against Lebanese actors.

This contradiction is not strange vis-a-vis the discourse and practices of supposedly “anti-imperialist” or “rejectionist” states that have had their fair share of open-ended negotiations and collaboration with both Israel and the United States.

“Historically, those in charge in the region would employ a dual strategy incorporating the blaming of foreign actors, as well as internal agents (traitors) who are ‘controlled’ by said foreign actors,” said Beirut-based researcher Azzam To’meh.

“The fact that Iran is in an on-going confrontation with the West allows its proxies and allies in Lebanon and Syria to further scapegoat the Americans or Israelis for their domestic crises,” he continued.

In line with the methods of a security state, this form of scapegoating often paves the way for dangerous escalations, exemplified most recently by the arbitrary arrest (or kidnapping) of anti-Hezbollah activist Kinda Al-Khatib on June 18.

As opposed to other arrests, Al-Khatib was explicitly detained for reasons pertaining to “collaborating” with and “entering” Israel, alongside “giving information to Israeli journalists and military personnel.”

For many, the case of Al-Khatib rings memories of what happened to Ziad Itani, an actor falsely accused of collaborating with Israel two years ago. After facing extreme torture and public humiliation, it was revealed to the public that Itani was innocent and what happened was simply a product of fabrication and misunderstanding.

Consequently, the ultimate byproduct of Lebanon applying a national security policy similar to that of neighboring Arab countries is a significant breakdown of population trust in the state when it comes to security issues.

Critically assessing ways in which the state has addressed “foreign conspiracies” is not an invitation to delegitimize the quest for national liberation, especially with the rise of the Israeli right-wing and Donald Trump’s recent sanctions.

It is instead a pledge to complete the project started in 2011 amongst many Arab revolutionary pro-democracy circles; to create a movement which bravely resists both the imperialist occupier and the Arab Tyrant himself.