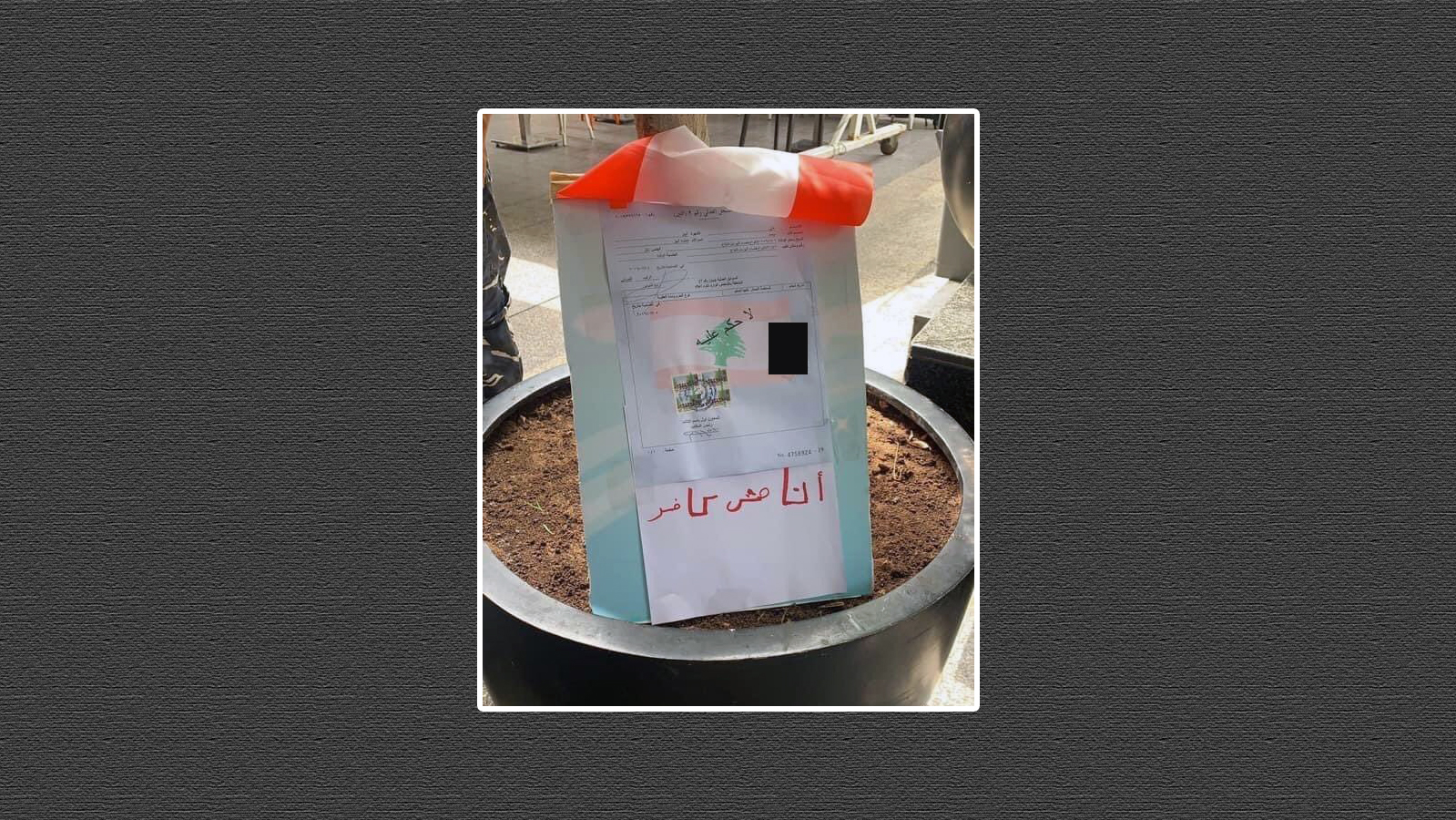 A 60-year-old man died by suicide this morning on Hamra Street, where a Lebanese flag, a clean judicial record, and a paper reading “I am not a sinner” were found in his possession.

“My cousin killed himself because of hunger,” a family member of the deceased was recorded yelling in front of Internal Security Officers in Hamra. “Curse this country.”

On the same day, a 37-year-old van driver was found hanged inside his apartment in Jadra, Lebanon.

How are you feeling? If you’re having suicidal thoughts, reach out to the Embrace Lifeline, Lebanon’s first National Emotional Support and Suicide Prevention Helpline on: 1564.

Lebanese citizens and residents are suffering under the worst economic crisis that the country has witnessed in its history. With a tone-deaf government and political tensions among the country’s ruling class, it is uncertain whether there is an effective plan to exiting the crisis.

Some supermarkets across Lebanon have begun limiting purchases amongst customers to only two or three units of each foodstuff, due to increasingly low supply.

The Lebanese food economy relies heavily on imported goods, which are paid for in dollars, now evermore scarce due to the impending crisis and illegal capital controls imposed by local banks. The crisis has seeped into every aspect of life in Lebanon, now most importantly threatening food security.

Food security is defined by the United Nations at the 1996 World Food Summit as the ability of people to have at all times “physical, social and economic access to sufficient, safe and nutritious food that meets their food preference and dietary needs for an active and healthy life.”

The World Bank has estimated that in 2020, poverty prevalence will rise to a threatening rate of 45 percent in Lebanon. A photo essay commissioned by Agence France Presse in late June showed several households around Lebanon with near-empty fridges as the crisis threatens the livelihood of the working class.

With the lira in freefall against the dollar in the black market, citizens have taken to stockpiling essential food items such as canned goods and rice in order to avoid a rise in their prices during the coming weeks.

The latest blow to citizens came as the standard 900g of Lebanese flatbread witnessed a price hike from LL 1,500 to LL 2,000. Fuel and oil are speculated to suffer price hikes in the coming weeks, with drivers lining up at gas stations to fill up their tanks.

The availability of electricity in Beirut has reached a low point

The electricity sector has also taken the hit, with electricity in Beirut reaching a low of only two hours per day. Circulating tweets suggested that a Turkish flight was forced to abort landing in Beirut because the lights on the runway went out.

This seems to be the flight that tried landing but then went up again and made a turn. pic.twitter.com/XWu0KcXReS

At one supermarket in Nahr Ibrahim, a sales clerk refused to sell a woman four packs of women’s sanitary products, citing “low supply” and uncertainty as to when they will be able to restock next.

Political leaders have begun to warn their followers about a possible famine over the winter, urging them to think of long-term solutions such as planting their own produce.

Over the weekend, citizens lined up outside of bakeries in order to buy bread due to speculation of a near shortage, while on the other end of the spectrum, the country’s wealthier classes were seen lining up outside of luxury fashion houses such as Louis Vuitton.

Activists have begun to discuss the disappearance of the country’s middle class, as more than 33 percent of the population sinks below the poverty line at an alarming rate.

Other stores across the country have taken to shutting their doors to take a stand against purchasing goods at fluctuating rates and selling to customers at escalating prices, including Mike Sport, Brands for Less, and Diamondogs.

The government’s response has been inadequate

In response to the crisis, the government has adopted two main pillars to activate economic activity within the country: Obtaining a loan from the International Monetary Fund (IMF) and encouraging tourists and expats to visit and invest in Lebanon.

The government’s IMF plans have reached a tipping point. Political tensions within parliament are preventing any cooperation over the IMF rescue plan, with yet no breakthroughs since negotiations began in May.

“The core of the issue is whether there can be unity of purpose in the country that can then carry forward a set of very tough but necessary measures,” said Kristalina Georgieva, the managing director of the IMF, in a public statement.

.@KGeorgieva – Discussions with the Lebanese authorities are ongoing, but there is no breakthrough on an IMF financial assistance program yet. #Lebanon’s complex challenges call for unity among all stakeholders and decisive action to restore sustainable, inclusive growth. pic.twitter.com/ax8HAxQF3R

As for Prime Minister Hassan Diab’s plan on injecting hard currencies into the market via tourists and expats, this plan is proving to be nearly impossible as the world battles a pandemic that has infected more than 10 million individuals and taken 500,000 lives across the world.

The country’s only international airport may have opened at 10 percent capacity, paving the way for visits into Lebanon, but Lebanon’s Middle East Airlines (MEA) has come under fire for selling tickets at an absurd rate of $1,000.

Other government officials seem to be out-of-touch with the country’s current reality. Minister of Information Manal Abdel Samad was filmed taking a tour in local supermarket chain Spinneys. She seemed appalled at the country’s hiking prices, stating, among other things, that the gum was too expensive.

Despite the minister’s statement, prices have been suffering under inflation since October, when a political revolution began to protest against political corruption and the country’s failing economy.

MP Michel Daher, in a televised interview with OTV, even went so far as to say that Lebanon’s prices in dollars are cheap, neglecting the rising prices of basic goods in supermarkets.