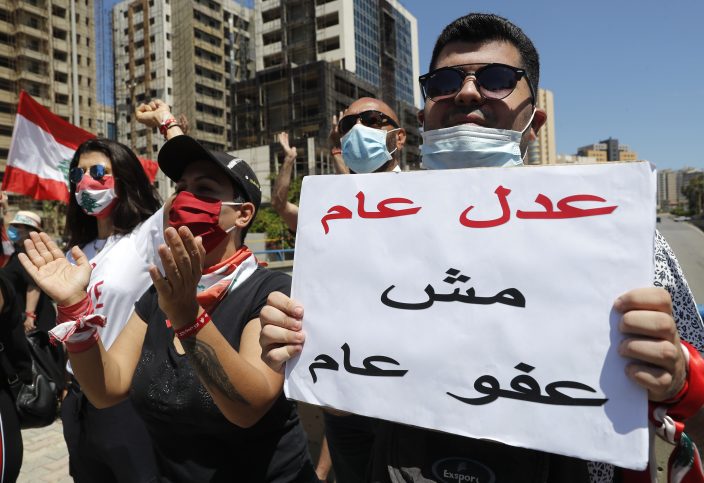 Parliament failed to approve the general amnesty draft law on Thursday, May 28, following a tense legislative session at Beirut’s UNESCO Palace. Disagreements on the law eventually culminated in tensions, leading to the withdrawal of the Hariri-led Future Movement from the session.

“I asked the Future bloc to leave the session because, as usual, we are working to reach somewhere, but there are those who want to bring us back to square one,” former Prime Minister Saad Hariri told reporters. “No, the Future Movement will take a stance.”

It was initially proposed by the Hariri-led government in October, prior to his resignation as Prime Minister due to mounting pressure from the October 17 revolution.

The law includes an amnesty for about 1, 200 Sunni convicts who have committed terror-related crimes that range from killing soldiers in the Army to participating in bombings during the war. Lebanon’s main Christian blocs –FPM, Kataeb, and the Lebanese Forces– reject the pardoning of those accused of killing soldiers and security members.

The draft law also includes an amnesty for some 6,000 Lebanese Christians, which has come to form another essential point of conflict for the different blocs.

This includes pardoning the Lebanese Christians who fled to Israel in 2000, when occupying Israeli solders withdrew from the South. Some of these citizens had gone on to cooperate and work with the state against Lebanon’s best interests, while others had gone on to acquire the Israeli citizenship. Some live on Israeli soil today.

Should the draft law be approved with these clauses, these individuals will be allowed to return to Lebanon.

The rest of those under consideration are 30,000 people from the Bekaa region wanted for drug trafficking, drug abuse, murder, kidnap and robbery amongst other crimes. The majority of those convicted are from the Shiite community.

The Free Patriotic Movement, under the leadership of Gebran Bassil, attempted the amendment of the law by excluding “perpetrators of crimes against public funds and terrorist crimes.”

“Basically, we believe that criminals must be punished and we reject the general amnesty law. We are against the swap that was proposed: pardoning criminals and terrorists in exchange for the return of Lebanese from Israel,” tweeted Bassil, adding that, “The amnesty law for those fleeing to Israel was originally issued and only lacks the applied decree. Those with blood on their hands should not return. No State can be built by encouraging crime.”

His tweet was met with a response from Ahmad El Hariri, secretary general of the Future Movement, who said that “the difference between us and you, the Plato of our time, is that we’re against smuggling criminals and traitors through international deals.”

“We worked on the general amnesty in front of all Lebanese to stop the injustice against Lebanese citizens sitting in prisons without trials. For the thousandth time, your word doesn’t mean anything because there hasn’t been one agreement that you haven’t challenged.”

The amnesty law has been met with fervent rejection in the streets. Thursday’s session caused a wave of protests throughout the country, including those led by the Syrian Social Nationalist Party and the Lebanese Communist Party, who oppose the law.

A group of protestors had gathered outside the UNESCO palace, chanting and advocating that these Lebanese citizens who worked with Israel have no right to return due to cooperation with the enemy.

In Sidon, some protestors burnt the Israeli flag and advocated against a law that would “affect Israeli agents who sold their land, fought their people, and plotted against them.”