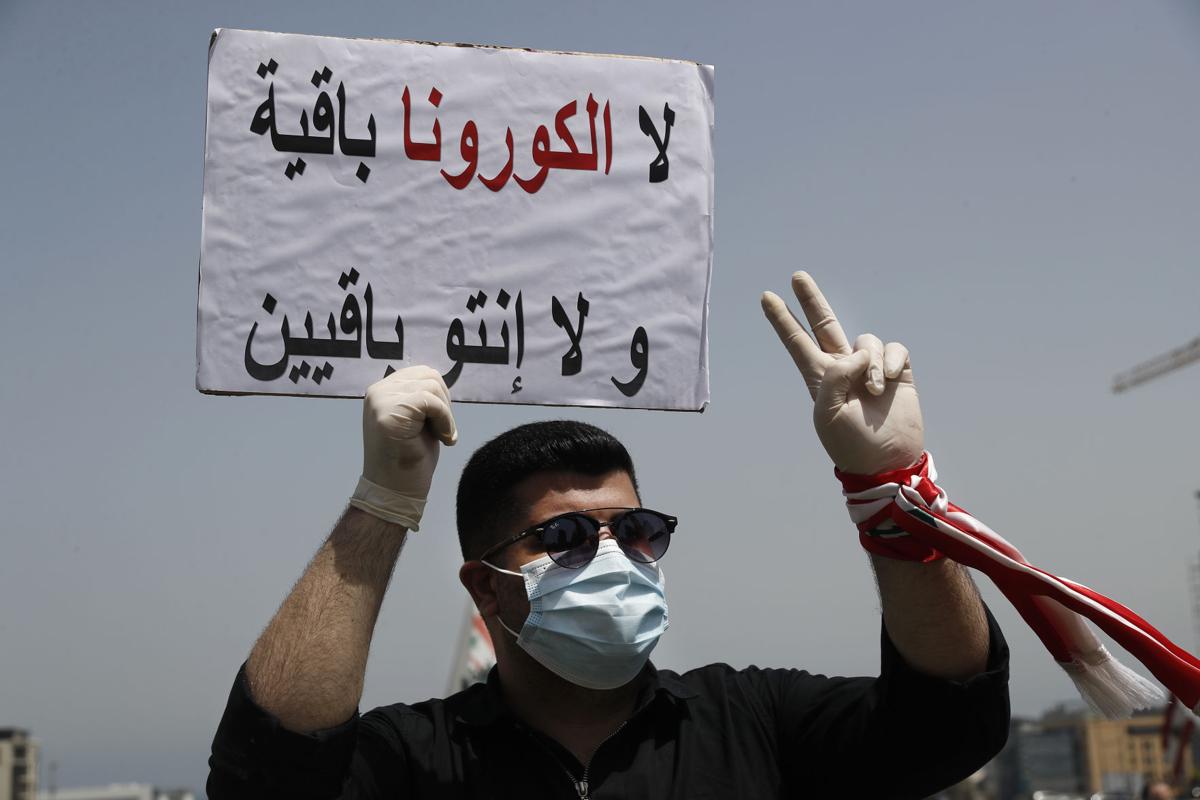 "Neither coronavirus nor you will last," reads this sign from a protester in Lebanon on April 24. (Photo: Lebanon Express via Hussein Malla / Ap)
Home
Community Voices
Activism

Protesters return to the streets as value of Lebanese lira plummets

Hundreds of protestors gathered across Lebanon on April 23 to protest the Central Bank’s policies and the continuous devaluation of the Lebanese lira.

A circular from the Central Bank ordered that money transfer services operating outside commercial banks, such as OMT, must issue cash in Lebanese liras at “market rate” starting April 24. As such, massive queues lined up outside of Lebanon’s OMT and Western Union branches yesterday morning to make use of their last chance to receive incoming transfers in dollars.

The Central Bank’s circular did not specify what market rate should be used by money transfer services.

Because of Lebanon’s worsening financial crisis, the value of the local currency has plummeted to almost LBP 4,000 for every one US dollar as of April 24. Despite this, the official exchange rate remains set at the original pegged LL 1,500 per USD – more than two times less than the current market value.

Meanwhile, the Syndicate of Money Changers in Lebanon called on all exchange shops to close in protest of the deteriorating value of the lira. The syndicate’s statement stressed the need for better regulation against the “chaotic increase in the price of the dollar that is being fueled by rumors, fake news on electronic platforms, and economic analysts who are seeking fame.”

The latest protests come in spite of the lockdown policy set to curb the disastrous effects of a COVID-19 outbreak, which has strained the economy and medical sector further.

According to local news sources, the lockdown has been extended for two more weeks. Prime Minister Hassan Diab is set to announce a multi-stage plan to relax some measures and reopen businesses later today, following a Higher Defense Council meeting at the Presidential Palace in Baabda.

Lebanon has officially recorded 696 total cases and 22 deaths related to the novel coronavirus as of April 24, with 8 new cases detected today according to the Ministry of Health.

In defiance of lockdown policies, demonstrators gathered in large groups after curfew had passed at 8 PM, chanting and protesting against the Central Bank’s financial policies and deteriorating living standards in the country. Protesters also began gathering today in Downtown Beirut.

The lockdown, which has been set since mid-March, has temporarily put all businesses –except those providing essential services such as food and medicine– to a halt. Many have lost their jobs in the process.

The government has failed to set a proper safety net in place, only promising impoverished families with a one-time payment of LBP 400,000 to aid them in these trying times. With the lira in unpredictable freefall when pegged against the dollar and cost of living continues to rise, this is barely enough to cover essential groceries.

With an economic crisis already straining the country, lockdown is proving to be another challenge most people are incapable of overcoming. Demonstrations have made one thing very clear: The people are fed up, and even with a pandemic on their hands, they cannot afford to postpone their demonstrations.