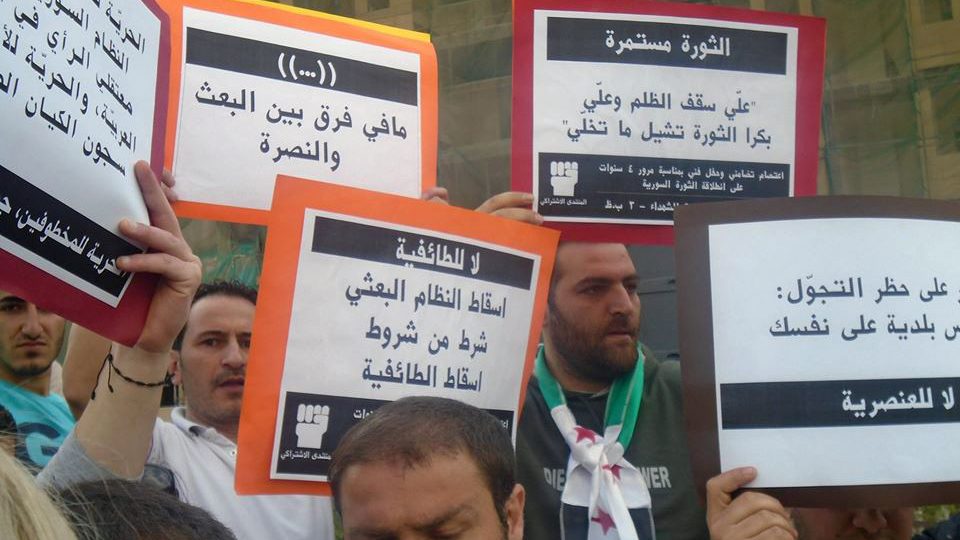 The protests in solidarity with the Syrian revolution in Beirut in 2015. (Facebook / @SRC.Lebanon)
Home
Community Voices
Activism

Has solidarity with Syrians become taboo in Hezbollah’s Lebanon?

With the current escalation in conflict prevalent in northwest Syria, especially after the aggressive intervention of the Turkish air force, Hezbollah lost at least eight militants towards the end of February.

The party’s military wing has been intervening in support of Syrian president Bashar Al-Assad for more than seven years, sending in thousands of trained fighters since 2013.

On the other hand, given Lebanon’s currency crisis and deteriorating economic status, popular protests sweeping the country since October 17 have intensified domestic criticism against Hezbollah and its political alignment, which has resorted to regional geopolitics to shore up legitimacy.

Amid this regional and domestic pressure, a controversy erupted online after the party had been criticized by Ali Jammoul for its participation in the Syrian War, and for justifying it on the basis of protecting the Sayyida Zaynab shrine.

The price paid by Ali and his family, ranging from threats to physical abuse, following his comments on Facebook has raised questions about whether vocally challenging the party’s involvement or mere tacit support for the Syrian regime’s victims is even possible in Hezbollah’s Lebanon.

The case of Ali Jammoul

Following the heated conversation revolving around Ali’s unconventional opinion within the community, he received threats within hours via messages alluding to his place of residence and work.

After deactivating his Facebook profile and communicating with relatives in connection with Hezbollah officials to resolve the issue, he was surprised to hear of the beating of his seventeen-year-old younger brother in the middle of his house by affiliates of the party.

His family was later informed that there is a particular party decision to make Ali pay by persistently harassing and pressuring him until a formal and public apology is released for his earlier comments. Ali has preferred not to succumb to the threats and has instead referred to the judiciary to deal with them directly.

While suppression of vocal critics within the party’s local community is no surprise, many questions have been raised about the ways in which Ali’s case was dealt with.

“In the case of Ali Jammoul specifically, the human toll and political/economic pressure exerted on Hezbollah’s support base and fighters have induced a harsh reaction to Ali’s critical comments,” said activist Ali Makki.

“I don’t have an exact sample, but from basic follow-up it is obvious that there exists a collective acceptance that Ali must pay a price for his statements,” he continued.

These events occur amidst rising discontent amongst Hezbollah supporters towards the party’s domestic politics, showcasing a shift towards ‘self-criticism’ and an overall change in attitude. However, it’s questionable if the same can be said about more hardline components of the party’s support base.

“While the post-October 17 reality has allowed for relative change within the Shi’a community, particularly with regards to how the Left and local youth have historically addressed Hezbollah, the more hardline components within the community have grown more stubborn, taking into account the challenges from within posed by the uprising,” said Makki.

Solidarity has a price with Hezbollah

While anti-war activists worldwide and even in the Global North have faced risks for articulating their solidarity with the victims of imperial intervention (Vietnam, Iraq, Nicaragua, etc.), one ought to examine whether an anti-war movement in Lebanon has been allowed the privilege of speaking out.

In the Summer of 2011, pro-regime thugs aggressively attacked a protest organized in front of the Syrian embassy in support of the Syrian revolution. The consequence of the attack included several injuries, some being quite serious.

Two years later in May, following Hezbollah’s direct and public intervention in the Syrian border-town of Qusayr, Marwa Olleik tweeted in solidarity with the Syrian people and in opposition to Hezbollah’s armed support of the Syrian regime.

After several demands that Marwa apologize for her stance in exchange for allowing her return to her town and home in South Lebanon, Marwa insisted that she would not apologize. The entrance and garden of her house were subsequently burned down.

In the same year, a protest facing the Iranian embassy and led by Shi’a opponents to Hezbollah was followed by the murder of activist Hashem Salman at the hands of party affiliates. Hezbollah and Amal later disapproved of burying the young man’s body in his hometown in the South.

In December of 2016, the AUB Secular Club organized a candle vigil in front of the university’s main entrance, holding posters that criticized Hezbollah’s involvement and in solidarity with the victims of the Syrian regime’s assault on Eastern Aleppo. The demonstration was followed by explicit threats and hundreds of attempts to harass the club’s members.

A year later, due to rather personal motives unrelated to solidarity, Dahye resident Ali Shamas used inflammatory language against Nasrallah when taking note of the human and economic toll the party’s intervention has on the local community. He was later obliged to publicly apologize on TV whilst holding an image of Nasrallah.

Beirut’s Spring and the Roses of Damascus

All in all, it remains rather contested whether the regime’s allies in Lebanon have systematically suppressed anti-war sentiment and transnational solidarity.

“Solidarity was not persistently suppressed as there remained a variety of civil society, leftist, and religious groups that maintained vocal support for the Syrian revolution,” says activist and director Hashem Adnan.

“Nevertheless, Hezbollah’s intervention in Syria drove this solidarity towards a more ‘humanitarian’ outlook,” he said. “As in, it was largely unable to articulate support for a grassroots political alternative to the regime in Syria.”

It is, however, unambiguously clear that institutionalized fear has been instilled amongst Hezbollah’s domestic and local intra-sect opponents, particularly after facing the pressures associated with Lebanon’s “October Revolution.”

The most recent tensions were the protests which took place in the Dahye region on March 5 and ended with unknown men storming into the house of protester Rola Salman –the sister of the late Hashem Salman.

While heated tensions and sensitivities have been on the rise, this behavior has precedents –most notably echoing the methods utilized by the Syrian regime during its occupation of Lebanon.

Will the culture of fear persist? The second wave of Arab revolutions has triggered a revival in popular protest and contentious politics within the region, accompanied by unprecedented forms of transnational solidarity.

It may as well be a time to remember an earlier victim of authoritarian occupation; in the words of the late Samir Kassir, “…the Arab Spring, when it flourishes in Beirut, it would be announcing the time for roses in Damascus.”