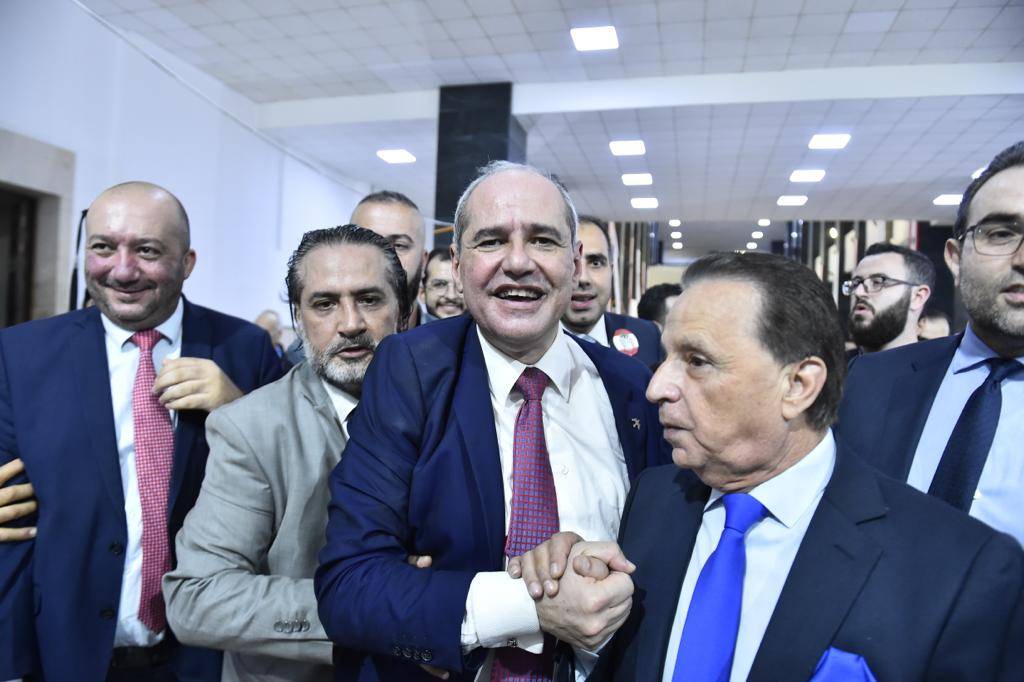 Moments after Melhem Khalaf was elected as the independent head of the Beirut Bar Association in November. (Ahmad Azakir/Annahar)
Home
News

Elected during the uprising, Khalaf pledges to work for all

It’s barely 9 a.m. but dozens of people already stand waiting around the open door of Melhem Khalaf’s Beirut office for an audience with him. Anyone can visit the newly elected, independent head of the Beirut Bar Association on Fridays during open hours to ask for help with legal troubles.

On a recent morning, a man who spoke with Khalaf about his case began shedding tears and stumbling over his words. Khalaf stopped him. “Calm down and take your time. You are a human, a respected person,” he said in a firm but reassuring tone.

“Take your time and speak all you need.”

Khalaf was elected on November 17, exactly a month after Lebanon’s unprecedented anti-establishment uprising began, after running an independent campaign against candidates backed by sectarian parties.

Due to this feat, his presence at protests and a long history of volunteering and humanitarian work, many saw him as the candidate of the uprising and his victory as its first electoral success.

When results were announced on the day of his election, hundreds of lawyers jubilantly chanted “Revolution, revolution,” and waved Lebanese flags inside the Bar Association headquarters.

But Khalaf says he doesn’t just represent those who took to the streets on October 17. “I am the head of this association for the entire country, all lawyers and all people,” he told Beirut Today in a recent interview. “I am not here for one group above another.”

He adds: “Now, did some people find hope in me? Yes, I can be a source of hope because of my track record and my daily work, which aims to be close to the people, always in service of the people.”

That assertion certainly is supported by Khalaf’s record.

He studied law at St. Joseph University and volunteered with the Red Cross during Lebanon’s Civil War (1975-90), helping the wounded and displaced.

Horrified by the scale of the violence and sectarian division, Khalaf and other volunteers from different religious sects in 1985 founded Offrejoie – “The joy of giving,” a humanitarian organization that seeks to aid and bring together Lebanese from various communities.

In 2017, Khalaf was appointed the vice-chair of the United Nations Committee on the Elimination of Racial Discrimination.

“I’ve been on the same path for a long time, dedicated to society from the age of 16. I didn’t come in here on a parachute,” he says, sitting at a large wooden table stacked with files.

“I got here due to the depths of my professional action and because I took a decision in my life not to discriminate, to be for all the people, to serve the weakest, the marginalized, the abandoned – those who have no one.”

From Protest to Politics

Being the independent head of the Beirut Bar Association, Khalaf said “means I am free from pressure, or from interests. I’m not tied to anyone.”

“I’m free except for two things: my morals, and my fear of god. Other than that, no-one can pressure me.”

Many Lebanese who took to the streets more than four months ago are hoping to bring similarly independent representatives into Parliament, by transforming the massive anti-sectarian uprising into an independent political movement.

Drawing from his own experience, Khalaf said people should get ready for the long haul. “Nations are not built in one step. We need many steps that will instill in us the required level of responsibility,” he said.

“We need people who have walked a path.”

And Khalaf dismisses fears the momentum of the uprising would be lost if it is not immediately seized upon.

“We won’t lose anything –it [the uprising] is a step, a very important step that changed all the criteria, let us go with it, build on it like we did with 2015,” he said, in reference to months-long anti-establishment protests at the time sparked by the government’s mismanagement of the solid waste sector.

Out of those protests emerged a host of political parties and civil society movements that participated in 2016 municipal elections and then 2018 parliamentary polls, both times with little success.

Despite protesters’ demands for early elections, Lebanon’s next polls are currently still slated to be held in about three years.

In defense of people, lawyers and the state

In the short time since taking the helm at the Beirut Bar Association, Khalaf has moved forward with several bold plans that he says are part of his job to protect all Lebanese citizens.

He has continued to support the Committee of Lawyers in Defense of Protesters, the prime watchdog group documenting arrests, abuses by security forces and representing detainees during the uprising.

In December, he led over 700 lawyers into prisons across Lebanon to assess conditions and provide legal assistance where needed.

Khalaf says that his job can be split into three main strands: defense of people, defense of lawyers and defense of the state and its institutions.

“We as the Bar Association are the legal conscience of society. As lawyers, we are protectors of public freedoms and human rights,” he said. “As much as we protect the rights of people, we are also sworn to protect the state –no one should come close to the state and its institutions.”

On a daily basis, Khalaf and his team spend much time helping people deal with often-menial issues that can have serious legal consequences. “Sometimes they can’t secure a small amount of money for fines, or for someone in jail.  A lot of the time they need help calling an official or re-activating a stalled file,” he said.

“Today, more than anything, people need a place to go for help,” he said, adding that Lebanon’s acute economic and financial crisis meant this need would only grow.

“I think that now, people know the Bar Association is a place for them.”