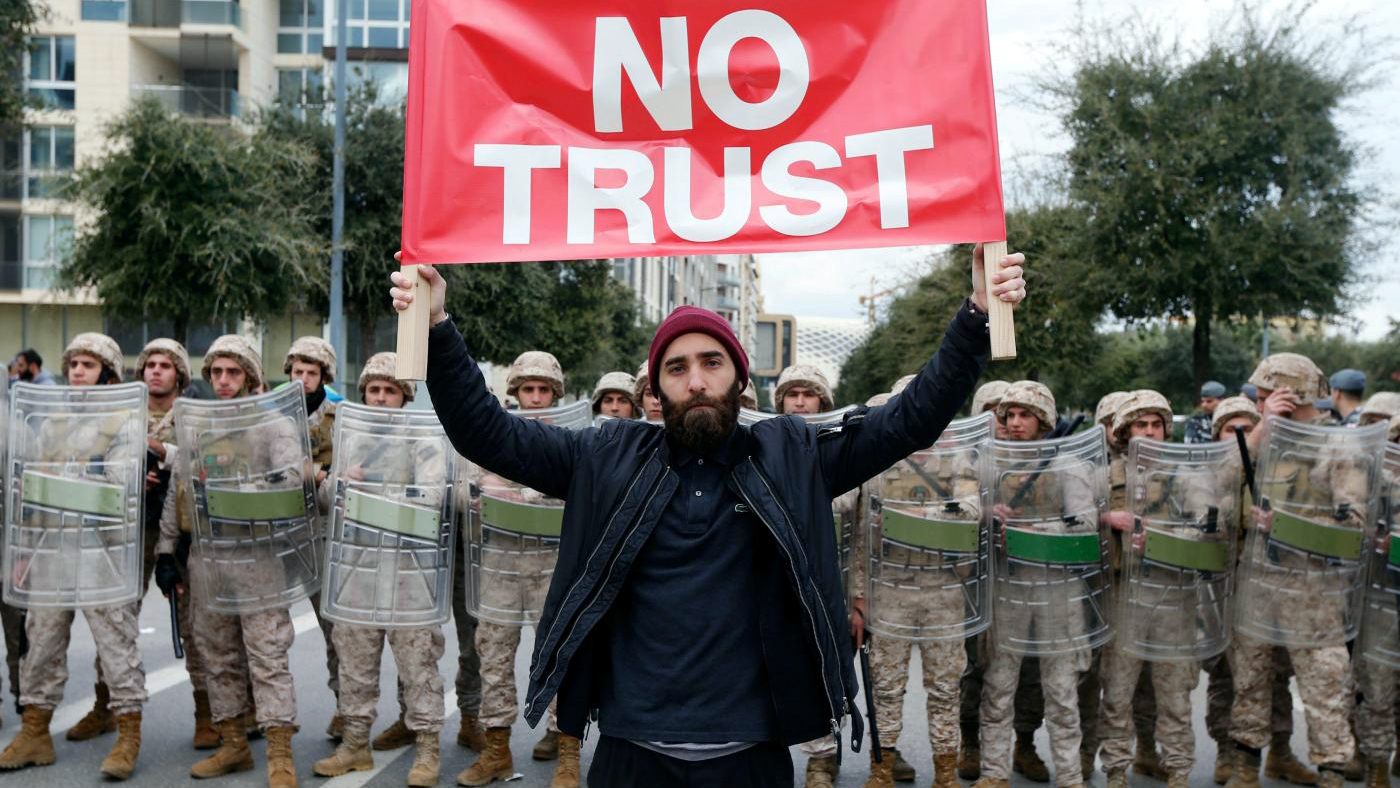 Diab’s “painful measures” are not necessary, they’re a political choice

After Hassan Diab’s government was formed, the Prime Minister hinted that “painful economic measures” are going to be implemented during his tenure. Such measures are none other than a strict austerity package, comprising of reductions in government spending and an increase in mostly indirect taxation that would hurt the average worker and are largely unpopular.

Yet similar comments have also previously been made by members of the political class, notably President Aoun and former Prime Minister Hariri, claiming austerity is the only solution to Lebanon’s economic problems. Their argument? Such measures come out of economic “necessity” and are recommended by “experts,” “technocrats,” and international institutions such as the IMF. All of them call upon the people to offer sacrifices, and accept a reduction in their living standards, claiming that this will benefit the greater good, and lift off the economy.

Sacrifices however are only demanded to be made by working people, the middle class and the poor.

For almost 30 years, banks have profited from a rigged economic system awarding them lucrative “investments” in Lebanese government debt, but are now spared from any consequences of the failing economy.

Diab promised that during his tenure, his government won’t default on Eurobonds payments, reassuring that banks and capital owners “investments” in Lebanese debt are secure. For Diab and his “technocrats,” as for the current political class, the consensus is clear: the economy and the state should serve the banks at the expense of the most economically vulnerable.

A discourse unchanged for the past 30 years

Diab’s comments on “painful measures” should not be dissociated from a general discourse that has emptied the economy of its social and political context ever since the end of the civil war.

Since Rafik El Hariri took office in 1992, economic policy has served to undermine the incomes of workers and farmers to the benefit of a select few rent-seekers close to the governing political class.Free trade agreements, a lowering of direct taxation, high interest rates and high indirect taxes were all measures that destroyed what was left of manufacturing, industrial and agricultural jobs in Lebanon.

On the other hand, “investments” in real estate and government debt became very lucrative, while high interest rates also offered high returns on bank deposits. Such economic activities, at their best, created very few low-skilled, low wage jobs and offered very high returns for a select few who produced little to no wealth.

While such activities were symptomatic of structural economic problems, the political class was never bothered to contain them. Aforementioned measures that led to the creation of such an economy were all done under the banner of integrating Lebanon into the international economy and making Beirut a financial capital in the region. The political class built this economic model while touting the advantages of free markets and facing little to no opposition.

These policies, however, were designed by banks and capital owners, and catered to their special interests. The Association of Banks were the most privileged in that regard. Their cartel-like organization had the effective power in setting interest rates and kept them extremely high to increase their profits.

Banks and their boards also maintained very close ties with the political class, with a great number of bank board members holding ministerial or parliamentary seats.

On the other hand, a lot of monopolies were safeguarded with import licenses, usually awarded to individuals close to the political class. Overall, economic policies were conducted by a select few, and served their interests at the expense of working people.

The discourse of the political class also served the interest of banks and capital owners. The banking sector is regarded as the “backbone” of the economic model, and protecting it is a necessity for a “good economy,” even at the expense of working people. Such claims perfectly embody the attempts at the depoliticization of economics.

The economy is regarded as an entity separate from political issues, with even popular economic demands being referred to as “livelihood demands” and disconnected from any political basis.

Diab’s new “technocratic” government perfectly exemplifies such a discourse, considering its appearance of expertise is being used by the political class to pass new austerity measures. Austerity measures are being marketed as “inevitable” and conditioned out of necessity, ridding it of its social and political context. The façade of the “technocratic” government is perfect for the political class to impose measures that would satisfy their interests at the expense of workers, all without taking the blame.

Austerity, however, never worked, and will never work: austerity measures have been shown to slow down growth, especially in economies facing a recession like in the case of Lebanon.

Proposing solutions and reclaiming economic policy for the people

The economic crisis in Lebanon is only the result of the greed of the banks and the corruption of the political class. As both were the ones setting the country’s economic policies, they hold the sole responsibility for the financial collapse and should thus pay the burden and be held accountable.

A restructuring of the debt in that case is the fair and optimal solution, with a significant lowering of interest repayments. Banks should have to accept losses to their “investments,” as they have been profiting from the unjust economic system since the end of the civil war.

The public sector would therefore reduce expenditures on interest payments, and shift money to capital expenditures, thus providing the public good and spurring economic growth without jeopardizing the incomes of workers.

While proposing solutions, one has to recognize the uneven balance of power imposed by a political class that caters to the interests of the rich. No fair solution to the economic crisis can occur without the mobilization of those who are the most affected by it, namely working people. As unions were hijacked by the political parties that created this unjust system, regaining them should be a priority to solidify workers bargaining power in the face of hostile special interests.

Opposition to the current political establishment should also outline the political dimension of economic policy-making. A “technocratic” government in that case should not be regarded as a solution.

A government of “experts” perfectly fits the narrative the political class is promoting to impose austerity measures under the pretext of necessity.