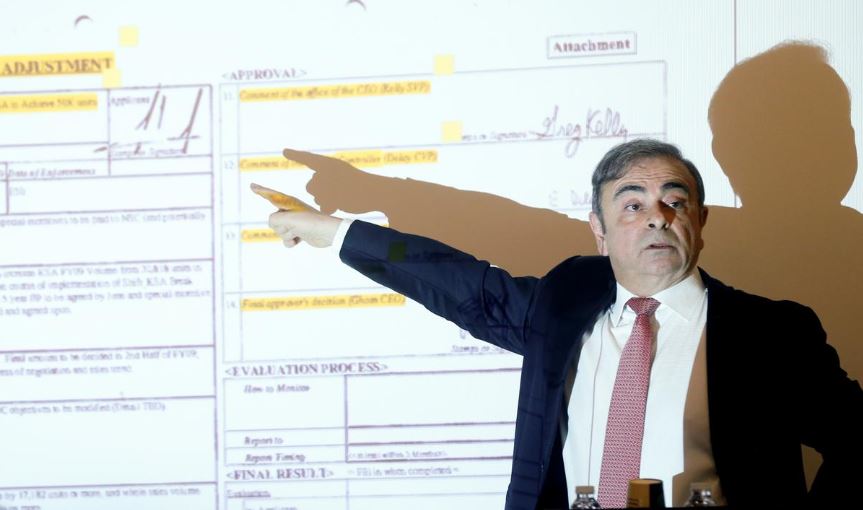 Former Nissan Chief Carlos Ghosn, who skipped bail to avoid charges of financial misconduct and fled Japan for Lebanon, said he did so because he was being abused and treated unfairly by Japanese officials.

In his first comment since arriving in Lebanon on New Year’s Eve, the former Nissan motors chairman claimed that Japanese authorities were trying to frame him.

“Today is an important day for me, one that I have looked forward to every single day for more than 400 days since I was brutally taken from the world as I knew it,” he said. “I am here to clear my name.”

Ghosn met with the media in the highly-anticipated news conference in Achrafieh. In front of a clutch of microphones and cameras, he attacked the Japanese justice system as being abusive. According to Ghosn, he was “interrogated for up to eight hours a day without any lawyers present.”

“I was brutally taken from my work as I knew it, my family and my friends,” he said.

Acting as if he was defending himself in court, Ghosn projected documents he said cleared him of various charges on a large screen.

Ghosn was arrested in November 2018 and charged with four counts of financial misconduct including understating his pay by more than $8 million and misusing Nissan company assets.

Accusations included illicitly tapping into a “CEO reserve” of Nissan funds, throwing a costly party to celebrate an alliance of Nissan with automotive companies Renault and Mitsubishi at Versailles Palace near Paris and that he used Nissan funds to buy properties across the globe.

Ghosn also accused Nissan executives and Japanese prosecutors of an elaborate conspiracy scheme that would lead to his arrest on four charges of financial misconduct. He likened his arrest to one of the 20th Centuries most infamous military operations: “Did you notice Pearl Harbour?” he asked at one point.

A once celebrated figure in the automobile industry, reports said that Ghosn skipped bail, fled Tokyo in a box of musical instruments, flew to Turkey and then to Lebanon. Ghosn and his wife Carole reunited in their Achrafieh home in Beirut after months apart. He may not be out of legal danger yet.

Interpol delivered a red notice issued by Japan to Lebanon on Tuesday, the equivalent of an international wanted persons notice. Lebanon’s Justice Minister Albert Serban told the government’s National News Agency that the “required measures” would be taken.

Lebanese judge Ghassan Ouiedat issued Thursday a travel ban on Ghosn following a hearing session at the Palace of Justice in Beirut. The ban also requires him to keep authorities in the loop about his place of residence.

Reactions to Ghosn’s unanticipated arrival in Lebanon was met with conflicting reactions from the public. Some took pride in his Lebanese ancestry and defended him against the Japanese judicial system, while others saw his entry to Lebanon as an embarrassment given the recent widespread protests against corruption.

Ghosn is adamant on continuing the fight to clear his name, and says one way or another, “the truth will come out.”

“My impression in listening to him was that there were few statements that were backed by any real evidence,” she said. “If he wants to prove his innocence, he should face fair trial proceedings here.”