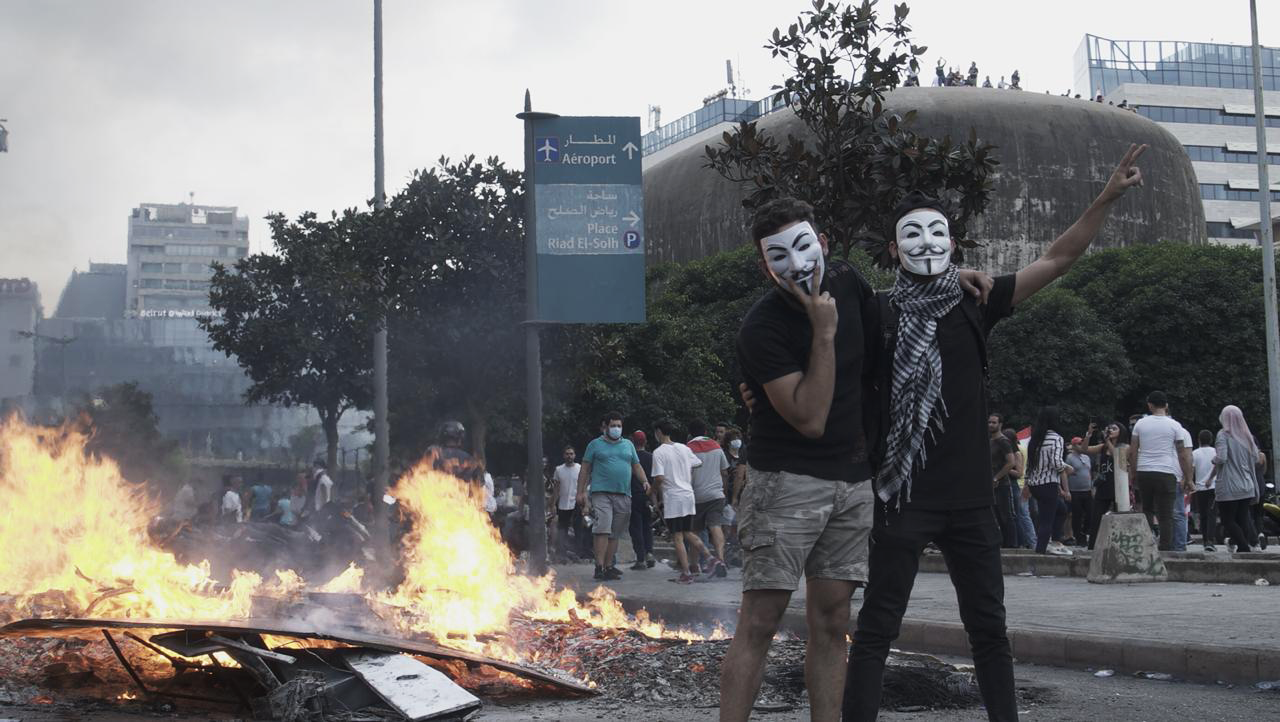 October 18, 2019 | The keffiyeh made appearances on Lebanese streets from the very first days of the protests. (PHOTO: Lujain Jo)
Home
Community Voices
Activism

Had we been asked to draw out our expectations for 2019, the last thing we could have imagined was a revolution that gave the streets back to the people. The picture was almost virtually inconceivable, with many of us planning futures abroad as the country lay motionless to the divisions overtaking it.

When people were called to the streets following a brief and violent interaction between politicians’ security guards and a few protesters, they obliged. In almost record time, they were sending each other DIY gas masks links and tips on how to avoid arrest and confrontation. If they could not purchase or find one to use, they would use sanitary masks they found at local pharmacies.

People quickly discovered that they could do anything to prepare themselves for a confrontation, making use of whatever resources are available at hand. They tied scarves around their noses and mouths, and for the periods of time when the tear gas stopped, they kept the scarves on in anticipation. Simultaneously, keffiyehs began to make an appearance across the country’s demonstrations, from Tripoli to Saida.

Exactly why everyone took theirs out of the closet is not an easy question to answer. Many Palestinian nationals took the streets in advocacy for a better Lebanon that will right the wrongs it has done towards them, while many other Lebanese people wore it simply to declare resistance. It started out as a political statement or a simple means to an end, but the impression it left was far more important than many anticipated.

The keffiyeh is not an average historical scarf, but a long-time symbol of resistance and protest. In its essence, it is an icon of Palestinian nationalism and unity, having first emerged in the Palestinian war of the early 1930s. For the years that came after, that is largely what the scarf signified: Wearing it declared an action of solidarity with the cause and its people.

The conversation in recent years has largely remained the same. Yet, the turn of the century has brought along far more uprisings than the 1930s, and what first started out as a national symbol soon became a regional symbol.

During the days of the Arab Spring, Arabs wore the scarf to demonstrations across their local squares, much like the Lebanese protesters have done. Activists in Europe and America often times wore the scarf to advocate their cause, leading many to question if the keffiyeh can ever be globalised.

Western designers fashioned remakes of the scarf in different forms and colours: Skirts, blouses and jackets were now to be passed off in the place of the original, simple scarf. American tourists would visit Lebanon and buy them in bulks as gifts for friends or families: To them, the keffiyeh was nothing more than a cultural souvenir of the Middle East. Westerners received the gift knowing it symbolized the region, yet never really understood what the cause behind it was.

What symbolized a multitude of political tensions and issues in the region was being subject to commodification attempts. Many would argue that taking the item back to the West was nothing more than a globalisation attempt. By wearing the scarf or gifting it, borders were diminished and the West and East were engaging in a mutual exchange.

But mutual exchanges between the two haven’t always been positive. With a longstanding power disparity between the two, and the West’s outrageous colonial history, it is difficult to imagine that globalising the keffiyeh will not take away from its original authenticity and purpose.

The floors of the Louvre may be full of historical artifacts taken from the region during the early colonial days, but the keffiyeh is one item the West cannot claim as its own. The East is in an ongoing battle to take back what is theirs and to dismantle existing colonial power ties that have robbed the region of its heritage. Ancient plates and jewellery will not be taken back from France or England, but politics and culture will not be stolen away.

In wearing the keffiyeh to protest, the protesters of Lebanon are making statements to the government and the world: Resistance is an imminent act of the Middle East that cannot be claimed.